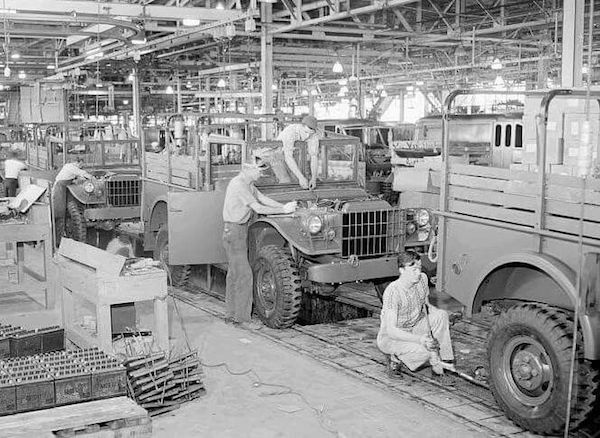 Dodge continued to build trucks of all sizes and ambulances through the WWII years while other manufacturers built tanks, airplanes, boats and other military necessities. (Compliments Dodge)

Q: I enjoy all of your nostalgia car articles here in The Owego Pennysaver (New York). There are many different opinions as to which manufacturer produced the first Post World War II cars and trucks. So, which vehicle manufacturer truly was the first post war producer? I still read different accounts of who did what and when. Thank you, Dave L., retired and happy in Owego, N.Y.

A: David thanks, and I’ll let some of my faithful readers help explain, as the word “first” has different meanings to them.

Personally I still feel Henry Kaiser and Joseph Frazer, the duo behind the Kaiser Frazer automobiles in 1947, would get the nod but with an asterisk, as to the first new car produced after the war. Turns out that in a previous column, I gave this “first postwar manufacturer” to Kaiser based on it being a truly new car, not one that was warmed over from the 1942 years.

Reader Don Massengale, from Florida, gave this explanation on post war vehicles: “I read with great interest your article about the 1948 Chrysler in Auto Round-Up magazine about the World War II auto production. The Ford Motor Company began making 1946 Ford cars in July of 1945. They were actually 1942 Fords warmed over with a new grille, but called 1946 cars. Also, Dodge made trucks during the period of 1943, 1944, and 1945. Most were called Power Wagons and Dodge also made ambulances for the war effort.”

Don is 100% correct about Ford, and as for those Dodge Power Wagons, the U.S. Army was one of Chrysler’s biggest and best customers. I drove many of them during my years on active duty in the Army in 1969 and the following six years in the Army National Guard. Talk about a real, heavy-duty 3/4-ton military truck that lasted all those years, and to this day many are still out there in private hands. 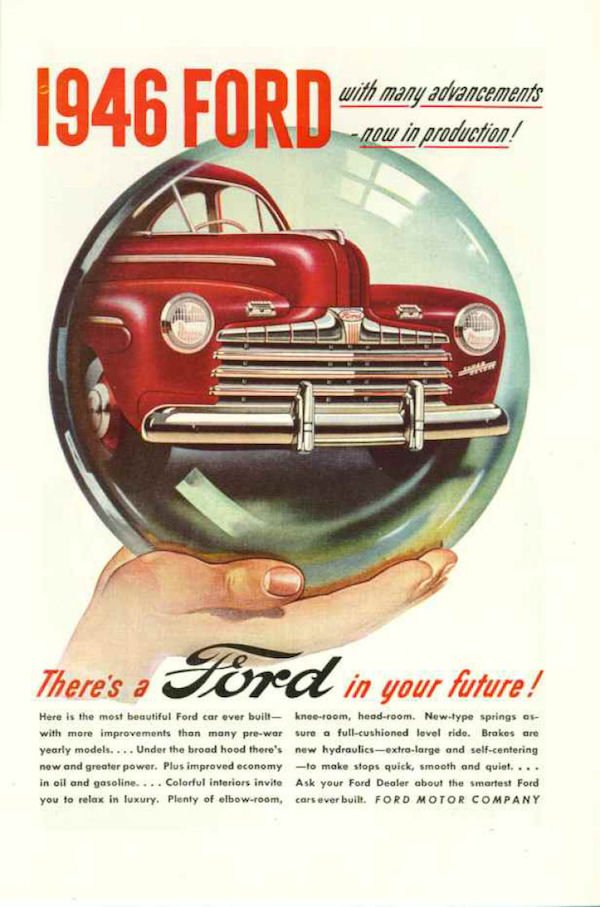 Ford rolled out its post WWII models in late 1945 as 1946 models, although they were mechanically identical to the 1942 models sans some exterior enhancements. (Compliments Ford)

Next, reader Phil Guilhem chipped in with his information, which I present here: “I always enjoy your articles in Auto Roundup and online, Greg. “Regarding the two 1949 series Chrysler cars, the 1st Series post WWII carryover 1946-8 style were distinguished (from 1942) by new serial numbers until the new for 1949 models debuted in March and April. All Chrysler brands got the new style body for 1949 and can be distinguished by their tail lights perched atop the bolt-on rear fenders on most body styles and very busy grills compared to the 1950 versions. These were bulletproof cars, and not very stylish in the eyes of contemporary buyers, but the bodies lasted until the new 1953 hit the market with V-8 engines now available for all but Plymouth. I’ve owned a ’50 Dodge, which led to the purchase of a 1951 New Yorker, which went away a couple of years ago with well over 300,000 on the clock and rock solid. Keep doing your entertaining and educational articles.” Respectfully, Phil.

Phil stresses that the 1946 Chrysler line was indeed the same 1942 line, sans some minor exterior tweaks.

Then, reader John Lee chipped in with this very informative info: “Hi, Greg. Good recap of post-war Chrysler and Imperial history. One corrective note, however. The 1949 Second Series was the entire Chrysler Corporation lineup – Chrysler, DeSoto, Dodge and Plymouth – that all came out in the spring of 1949 on April 1. All lines received a facelift of grills, bumpers and new, slightly extended rear fenders for 1950 with taillights mounted in the fenders. Also for future reference, the 1946 Chrysler Corporation cars were not really “identical” to the 1942s, but had new grills, taillights (except Chrysler) and some trim. Thanks, John.

Again, John points out that the only difference between a 1942 and 1946 Chrysler product were different grilles, etc. But mechanically, they were the same.

By now, my readers are aware there’s a lot to talk about concerning post war “firsts.” Clearly, there has to be a distinguishing factor between “first new car” and “first car to be released” following the war effort. Chrysler indeed never took time off with its military based Power Wagons and ambulances, while other manufacturers concentrated on non-auto military needs including everything from tanks to airplanes. 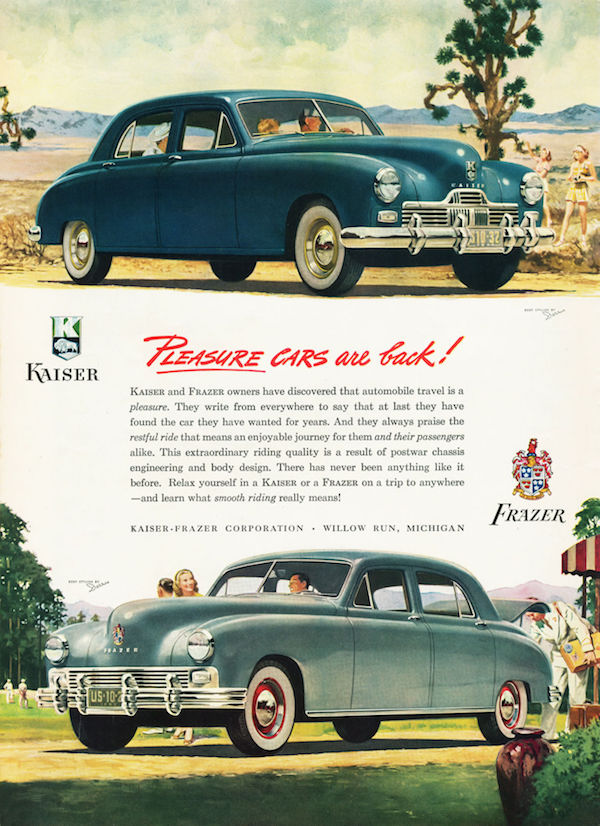 This advertisement promotes Kaiser Frazer’s “Kaiser Special” as the first all new post World War II American made automobile to hit the market in late 1946 as a 1947 model. (Compliments Kaiser Frazer)

Therefore, it is Kaiser, the noted shipbuilder and health care HMO founder (the HMO is still active today), that partnered with former Graham-Paige CEO Frazer in 1946 to build the first ever Kaiser-Frazer models – and all-new as a 1947 model.

Correctly anticipating a post war auto bull market, the duo leased a former Ford production facility in Willow Run, Michigan and quickly built 11,000 cars in 1946 as 1947 models. Granted this was the first ever Kaiser-Frazer to hit the market, but they were ahead with a real new car of most all the manufacturers in America by a good 24 months. In 1947, 100,000 Kaiser-Frazer’s were built and the company turned a near $20-million profit. The 1947 model was dubbed the Kaiser Special.

We’ve written before about Henry Kaiser, and had he not been a bit over enthusiastic in hoping to upset the Chrysler-Ford-GM big three domination he might have succeeded. However, going against the advice of Frazer, who left the company in 1948, Kaiser over-built and over-invested in the company, which he then called Kaiser Motors. Kaiser missed on his sales goals, and was offset by all of the new models from the big three and independents. 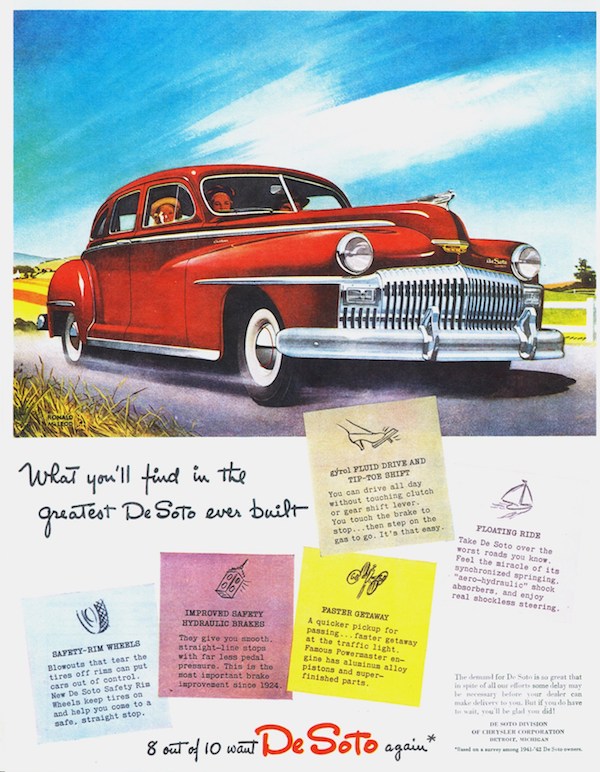 This 1946 DeSoto ad featured a few upgrades, but it was basically the same as its 1942 models with a few exterior tweaks. All new Chrysler Corporation cars were at showrooms by 1949. (Compliments Chrysler)

Thanks David, Don, Phil and John for contributing to this week’s column. Also thanks to Google, who is now making my columns (past and present) available directly into the personal news feeds of individuals that love cars. I’m receiving more letters now than ever!

(Greg Zyla is a syndicated auto columnist who welcomes reader questions on anything to do with collector cars, auto nostalgia or motorsports. Write him at greg@gregzyla.com.)

Be the first to comment on "Cars We Remember – Readers respond to first post WWII vehicles; Kaiser still first with ‘all-new’ model"