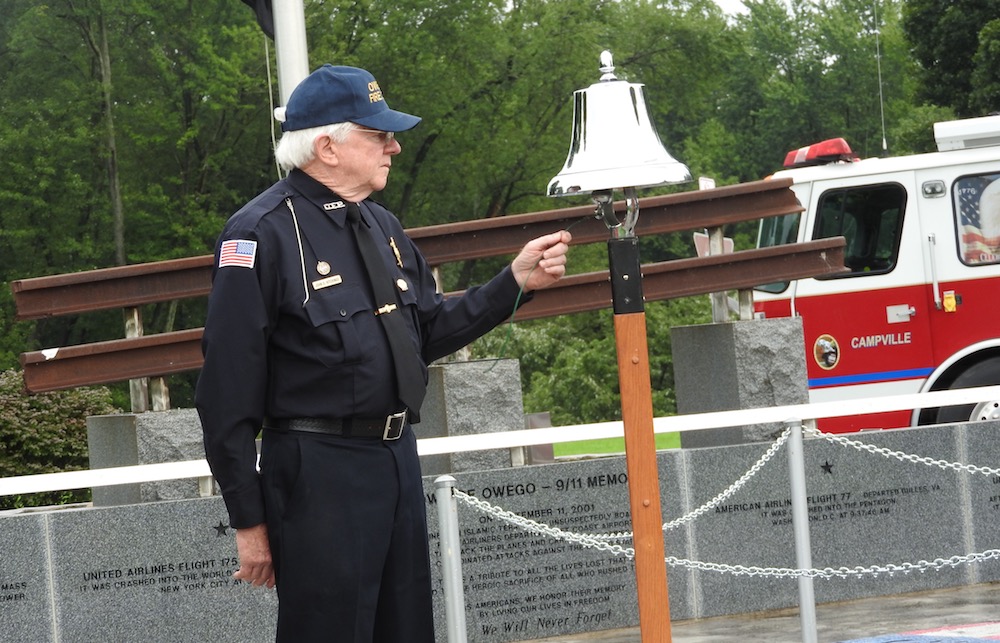 On the 20th anniversary of the Sept. 11 terrorist attacks, Owego, Campville, Southside, Apalachin, and other Volunteer Fire and Emergency Squad personnel will pay solemn homage to the victims with a ceremony steeped in reverence and remembrance on Saturday.

The ceremony starts at 8:30 a.m. at the Town of Owego’s 9/11 Memorial in Hickories Park. Facemasks or other face coverings and social distancing are encouraged.

The theme of the service is to “Never Forget the 9/11 Victims of Global Terrorism” and to honor the “Bravest of the Fire and Emergency Service and the Finest of Police Service” and make sure all lost in the 9/11 attacks are not forgotten.

Members of the public and emergency services personnel are invited to attend the 20th annual memorial event to honor the firefighters, paramedics, police, and those serving the emergency medical community. It’s the fifth service at the Town of Owego’s 9/11 Memorial after 15 years at the Baker Fireman’s Fountain in Owego.

Those firefighters, EMS, and police who responded to the World Trade Center are  pecial guests for recognition for their service and sacrifice.

Especially remembered by Town of Owego Deputy Supervisor Dean Morgan is former Town of Owego Apalachin resident Derek James Statkevicus, son of Joseph and Nancy Statkevicus. He was a Vestal High School graduate and Eagle Scout with Apalachin Troop 43. Derek was employed by KBW Bank and was on the 86th floor of the World Trade Center, South Tower.

First Responders say there is simply nothing more honorable, more courageous or more heroic than someone giving their life so others can live. Their annual ceremony is a small way for Owego and Tioga County to remember those who made the ultimate sacrifice on 9/11.

Owego and Tioga County citizens will respond to a Wreaths Across America call to join a national call to wave American flags outside for one minute at each of those times. Those at the Hickories Park will look at the large American flag hoisted by the Campville Fire Department aerial truck located by the 9/11 Memorial.

From Chief Easton’s “We Haven’t Forgotten”:

“We will never forget the sacrifices of so many on that day. Directly after the attack firefighters and EMTs from all over the country volunteered to assist New York City. We all learned that day what Americans are made of. We learned that we are part of the UNITED STATES. We hung flags, donated money, held fundraisers, and prayed for our brothers and sisters in New York City.

“It is time again to reflect back on 20 years ago. Remember the pain and sorrow, and remember the camaraderie and love we had for each other and our country.

“We need to cheer on our volunteers and encourage our young people to share their talents with others so that our country can continue to flourish. God Bless America! Never Forget! And don’t forget to vote.”

A bagpiper is a traditional part of solemn firefighter events. Bagpiper Pete Ziolkowski will lead the entrance and exit the procession. Flags were at half-staff by the Honor Guard of the Glenn A. Warner Post 1371, Veterans of Foreign Wars.

Speakers will include Town of Owego Supervisor Donald Castelucci Jr., who will thank all for coming. New York State Court Officer Matt Tallon, who remembers three officers, all victims of 9/11, will offer solemn words.

Derek’s dad, Joseph Statkevicus, is coming from Arizona. Two Eagle Scouts from Scoutmaster Chuck Birdsall’s Troop 38 will serve as escorts. A Troop 43 Scout will lead in the Scout Oath and Law in honor of Derek. Troop 43 Eagle Scout Scoutmaster Mike Martinez will speak. Joseph Statkevicus will remember his son Derek. Town of Owego Deputy Supervisor Dean Morgan will assist in the placement of a memorial wreath at Derek’s bench.

A symbolic ceremony remembered the seven who in past years gave their lives for the safety of Owego citizens. From the Owego Police Department Isaac Wiltsie and F. Allen Hall. From the Owego Fire Department Ray Wiltse, Winifred Knapp Sr., Richard Beck, Steven Gavin, and Matthew Porcari.

Other program events with Master of Ceremonies Jim Raftis include the National Anthem by Andrea McBride and taps by bugler Steve Palinosky.