The original Monkeemobile, designed and created by Dean Jeffries, is shown in front of his shop back in 1967 in Los Angeles, Calif. There is confusion as to who created the vehicle as many think it was George Barris, another noted car designer. (Jeffries Collection)

Last week, reader Mark Davis from Iowa wrote a hand written letter about TV cars and mentioned the Monkeemobile as one of his favorites. I explained its history just a bit, and the story is so interesting we’ll present Part II of the Monkeemobile history this week.

Many enthusiasts think that the great car customizer George Barris built the Monkeemobile, which is false. Although Barris did purchase an original Monkeemobile, and even built his own replica, the initial two vehicles are the work of the late Dean Jeffries, another TV car star builder and customize painter.

And it was Barris who benefitted most from Jeffries GTO Monkeemobiles, thanks to an interesting turn of events that finds Jeffries on the losing end of the car, its history, and finally the sale by Barris at the famous Barrett-Jackson Auction.

The two initial Monkeemobiles are actually 1966 GTOs that Jeffries received from Pontiac thanks to Pontiac’s advertising and marketing manager Jim Wangers, himself a noted Pontiac drag racer for Ace Wilson’s Royal Pontiac dealership in Royal Oak, Michigan. Wangers knew the promotion from the hit TV show The Monkees would help propel even more sales for the popular GTO muscle cars.

This is the George Barris owned original Monkees GTO that was sold in 2008 by Barrett-Jackson Auctions in Arizona for $360,000. It was one of two built by Dean Jeffries and restored by Barris Kustoms. (Barrett-Jackson Photo)

Designed and built by Jeffries, the Monkeemobile GTO features a split two-piece windshield, touring car convertible top, modified rear quarter panels and front fenders, exaggerated tail lamps, set of four bucket seats and an extra third row bench where there was originally a trunk. GTO emblems are noticeable on the front grille, and there was even a rear parachute mounted, as the car was powerful and also built for wheelstands.

Jeffries, meanwhile, was under contract with MPC, a.k.a. Model Products Corporation, with the task of designing and building the Monkeemobile. Wangers jumped at the chance to supply the GTOs, and delivered two 389-V8, four-barrel ‘66 GTO convertibles. Both had automatic transmissions and were ready for the conversions. As mentioned last week, MPC was the main benefactor with sole rights to market a 1/25th scale model kit of the Monkeemobile. MPC would go on to sell more than seven million kits, and to this day they are still in demand.

Jeffries changed the engine induction from the four-barrel to a 6-71 supercharger and the upgraded the rear to handle the extra power. As wheel stands were expected, it turned out that the Monkeemobile was a handful to drive so Jeffries removed the supercharger and added a dummy blower that hid the new Tri-Power setup.

After the television show, both Monkeemobiles were offered back to Dean Jeffries for $2,000 each. Jeffries had the right of first refusal while MPC, happy with the millions of model kit sales, could care less. Jeffries, meanwhile, declined the offer for reasons unknown.

Next in this crazy story, the “TV car” resurfaced in Puerto Rico being used as a hotel courtesy car. When the hotel fell on hard times and went bankrupt, it was sold at a government auction for $5,000 in 1992. Currently, the John Norris family owns the car in Bergen, New Jersey.

As for the second Monkeemobile show car things get really interesting, as it was Barris himself who purchased the vehicle. (Thus the confusion that Barris designed the Monkeemobile.) Barris parked the Monkeemobile many times in front of his Barris Kustoms building and undertook a major restoration in 2006 to bring it back to its true glory. This Barrett-Jackson auction “Monkeemobile” was featured as part of the Barris Hollywood Star Car Collection and acknowledged Dean Jeffries as the creator. This Monkeemobile was “re-done” by Barris Kustoms and restored by Mike Gray of Advanced Restorations. This latest restoration was completed in 2007, featuring a frame-off, fully detailed, 100-point upgrade that added a new stereo and even a TV system.

In January 2008, the Barris owned Monkeemobile went up for auction at Barrett-Jackson’s famous Scottsdale, Arizona, location.

The Monkeemobile sold for a staggering $360,000 and now is owned by a private, unnamed collector from Michigan. 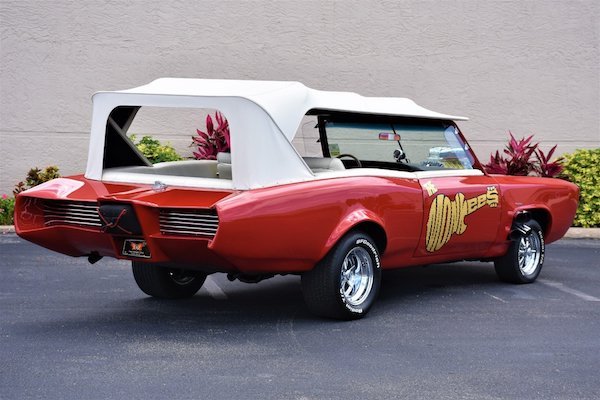 Barris also had a third Monkeemobile replica built, but with beige seats and yellow trim on the front headlights. He commissioned car builder Dick Dean to build it, the same person who assisted Jeffries in the initial Monkeemobiles build. Several other tribute cars have been built since then including a Monkeemobile for the “Monkees 45th Anniversary Tour” in 2011.

The 45th Anniversary TV show featured the complete vehicle build for the Anniversary Tour show, built to specifications by none other than Dean Jeffries, the Monkeemobile’s original designer and fabricator. He provided direction and commentary for the car’s refurbishment and this build was one of his last major projects before his death in 2013.

Pictured is the Monkeemobile sitting in front of Barris Kustoms. Provided photo.

Both Barris (who passed in 2015) and Jeffries are both regarded as two of the very best TV car designers with lengthy lists of vehicles to their credit. Barris notables are the Batmobile, My Mother the Car, Beverly Hillbillies Oldsmobile truck, and the Munster Koach and Drag-U-La. Jeffries hits include the original Monkeemobiles, Black Beauty from the “Green Hornet,” the Trolley in “Who Framed Roger Rabbit,” and initial work on the Batmobile before handing the deal over to Barris.

Further, Jeffries was a noted pin striper and car letterer, known for work on many race cars, helmets and even painting the words “Little Bastard” on James Dean’s Porsche 550 Spyder prior to Dean’s fatal crash in 1955. Jeffries custom car paint abilities also resulted in one of the first pearl paints, known as “Jeffries Indy Pearl.” He worked out of his shop dubbed “Dean Jeffries Automotive Styling” in Los Angeles after outgrowing his smaller shop in Lynwood, Calif.

Notable, albeit a bit off subject, is that only two of The Monkees played musical instruments, namely Mike Nesmith and Peter Tork. Mickey Dolenz would go on to learn the drums eventually, while Jones relied on his great voice and a tambourine throughout his career. All of the music on their initial hit songs was performed by “The Wrecking Crew,” similar to Motown’s use of the Funk Brothers (“Standing in the Shadows of Motown”) for its studio music. Both are great movies currently on YouTube along with “Muscle Shoals,” an equally great studio music documentary watch.

This wraps up the story of the Monkeemobiles and two great designers.

(Greg Zyla is a syndicated auto columnist who welcomes reader questions and comments on collector cars, auto nostalgia and motorsports at greg@gregzyla.com.)