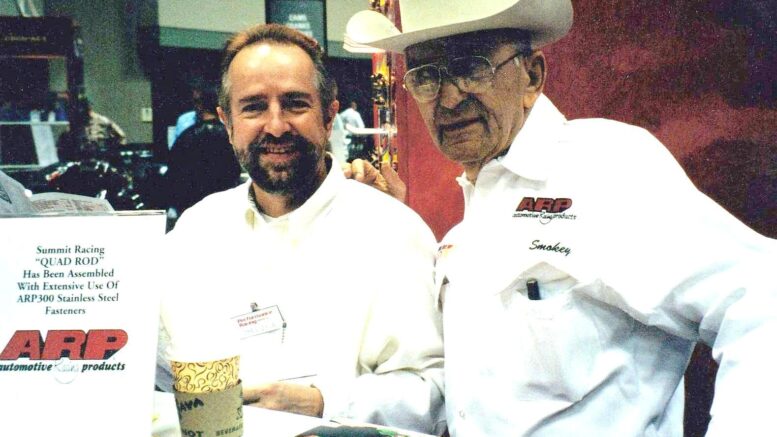 Pictured is Author and Columnist Greg Zyla, and Smokey Yunick, who passed away in May of 2001, at the 2000 PRI Trade Show ARP bolts and fasteners booth; both wrote for Circle Track Magazine in the 1980 decade and then worked more than 20 years together for Performance Racing Industry (PRI) trade show and magazine. (PRI Magazine Photo)

Q: Greg, can you help us old-timers once and for all get to the bottom of the 1963 Chevy 427 Mystery Motor true “mystery?” I remember you’ve written about it before, but for the likes of me I can’t recall what the bottom line was and how many of the so called 50 engines mandated by NASCAR were ever really delivered to Smokey Yunick’s garage?

I know you knew Smokey Yunick, so can you once again clear up this mess? You are one of the last living columnists who had contact with the people that made it all happen. Thanks very much Greg and we love your old car columns down here in Florida because we’re all retired, and we love to argue about racing and cars over morning coffee. John, Charlie and Calvin, Jacksonville, Fla.

A: John, Charlie and Calvin, I swore off this Mystery Motor subject years ago but am going to make an exception as I have uncovered new evidence as to the actual number of Mystery Motors delivered. Additionally, it doesn’t take much for me to write about Smokey Yunick, one of racing’s true legends.

My friendship with Smokey Yunick came about when we both wrote for Circle Track Magazine during the 1980-decade. Next, we both went to work for Steve Lewis and his new Performance Racing Industry (PRI) magazine and trade show. Smokey was also our yearly PRI Roundtable host during our conventions that attracted some 70,000 race-only participants from around the world.

Our friendship lasted until Smokey’s passing in May of 2001 following the 2000 PRI Show in December. My job at the PRI Show was to drive Smokey around on a golf cart wherever he wanted to go in the Indy Convention Center. We always had a hoot of a time and so many people would make me stop so they could chat with Smokey.

I’m not going to try and hide how fond I was of this mechanical genius, and to this day I’m still upset that NASCAR hasn’t inducted Smokey into the NASCAR Hall of Fame because of hard feelings. I’ll also let you know that Smokey was very aware of the racing media, and even though he admitted many times to me that most of them couldn’t turn a wrench on an engine or drive a car well, let alone a race car, the racing motorsports media was important to all of racing’s success. He called certain motorsports writers, who he respected, “big shooters,” while the others were, well; I’ll just say “little shooters” because Smokey used other adjectives. However, regardless of shooter status, all motorsports journalists were and still are important.

Again, of all my friendships in motor racing, and the opportunities I enjoyed meeting and interviewing the biggest names in racing, I will always rate Smokey Yunick on top of that list. 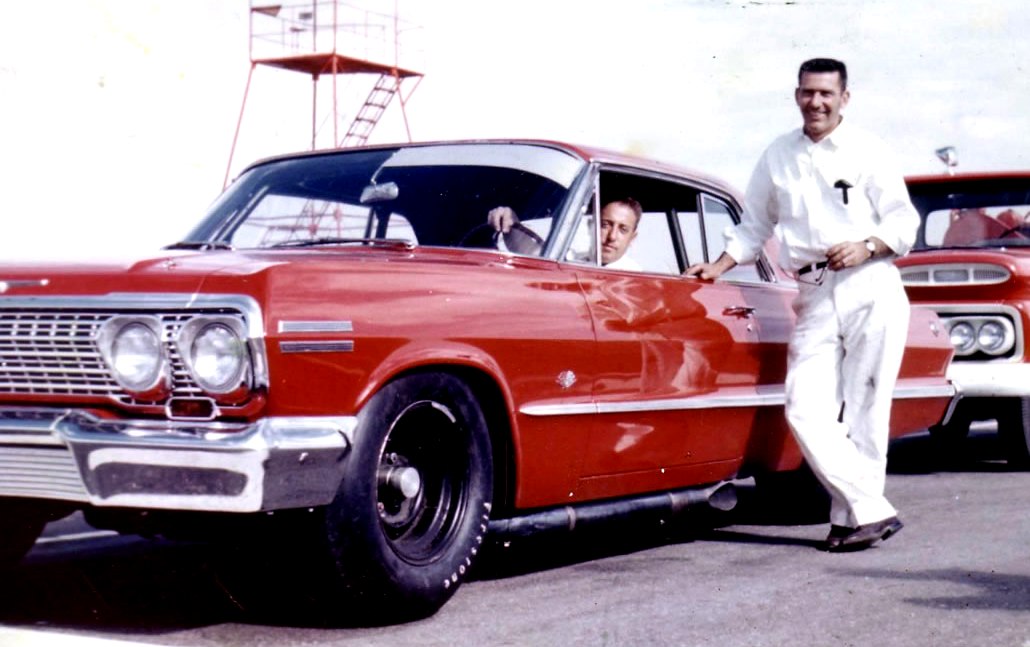 This is the original 1963 Mystery Motor big-block Impala that Rex White (behind wheel) and partner/engine builder Louie Clements built and took to Phoenix for initial testing. (Mike Clements collection)

As for the Mystery Motor 427 Chevy, NASCAR ruled that 50 had to be produced to be legal to take the green flag in 1963 at Daytona.

The actual number built, after years and years of deciphering everything, is now 14. Smokey told me several times it was less than 20, so we’re going to go with 14 as the true number of 1963 427 Mystery engines built and delivered by Chevrolet.

In addition to Smokey, here’s the important information I received from two of the other main principals involved with that engine, namely Mike Clements, son of Louie Clements of Rex White team fame, and Bill Howell, one of the Chevy engineers in charge of the Mystery Motor completion. Here are their communications concerning that special 427 engine.

Said Mike Clements, son of Louie and noted engine builder: “Greg, this is an updated response to the Mystery 427 Chevy engines. The engine in your photo is actually the 427 mystery engine my dad, Louie Clements, built for Rex White to run the 1963 Daytona 500. That engine pulled 540 horsepower on the dyno a couple nights before the race. Just before the July 4th Daytona race, my dad gave this engine to Junior Johnson to help him complete the 1963 season. Also, thanks for your writing efforts as I am now reading everything I can find about the early years of NASCAR. You are right about the Mystery 427 engine. Most NASCAR ‘historians’ claim there were 48 complete engines built; but my dad, (Louie) and Rex (White) were at Smokey’s shop when the big truck from GM dropped off the engines. They both counted only 14 engines, which sounds much more believable and relates to your story about Smokey telling you how they would switch them out to another shop real quick to fool NASCAR inspectors.” 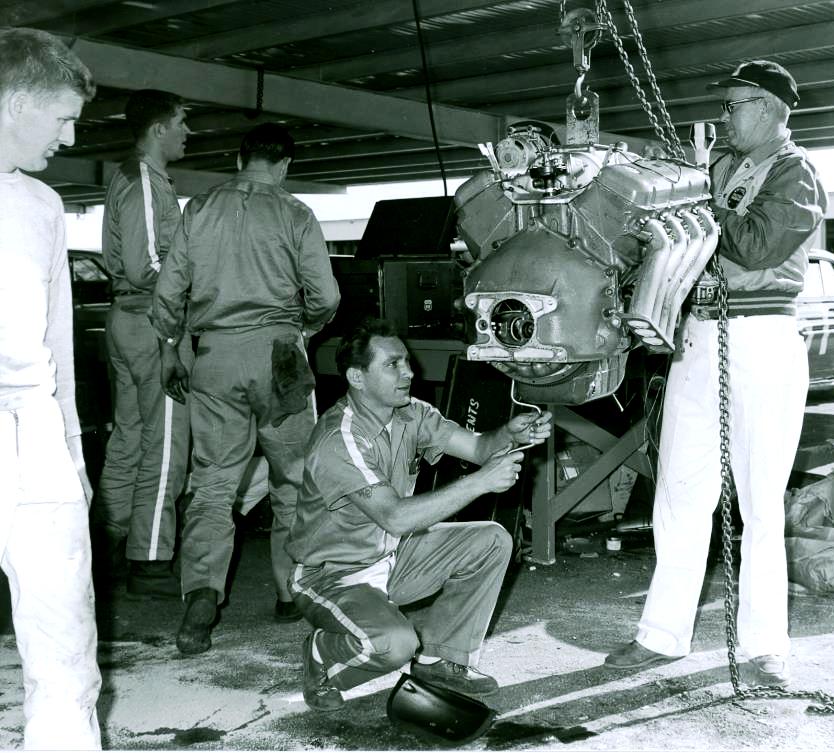 The Mystery Motor 427 engine gets ready to be lowered into Rex White’s Chevy Impala prior to the 1963 Daytona 500. Shown, from left, are James Hylton, Dean Hall, Ken Miller, Slick Owens, and an unidentified Chevrolet factory representative. (Mike Clements collection)

Clements told me that his dad Louie and Rex received just one engine that was in their car for the Daytona 500, and they had to run all year on that one engine. By July, Louie gave that engine to Junior (Johnson) to help him through the season. Bill Stroppe gave Clements and White a brand new ‘63 Mercury race car when they showed up for the 1963 Firecracker 400 at Daytona.

Clements also explained that the black and gold Chevy that Smokey ran at Daytona was actually built by Rex and his dad (Louie) at their shop in Spartanburg, S.C. Chevrolet paid them to build two cars for testing at GM’s Mesa Arizona Proving Grounds. After the tests were complete, GM sent one car down to Florida for Smokey to run in the 500. He hired Johnny Rutherford to drive it, and he won the 100-mile qualifier.

From Bill Howell, Chevy High Performance Team Engineer and Howell EFI Founder: “Greg, I saw your story about Mike Clements, and the Chevrolet 427 Mystery engine. I am probably the last one alive from the Chevy development team and I was at the test mentioned at Phoenix by Mike. Although I have no knowledge of how many engines were delivered, that ‘less than 20’ sounds about right in your discussions with Smokey. I always had two development engines in the mix, and they started as 409’s and eventually ended up as 427’s with the same stroke and a bigger bore. We sent three engines to Mesa, Arizona, for the tests, and eventually fried all three of them with mixture distribution problems, air cleaner problems, and running on pump premium fuel. I remember we were there for three weeks testing in November, worked out the bugs on the dyno, and we went back in January of ‘63 for a durability test at 12.5 compression and on racing fuel. We ran 433 miles at 177-MPH average until we broke an intake valve that terminated the test. That engine was the most fun I have had in my life, and I remember all the details even though I’m 83 now. Don’t ask me what I had for breakfast, but I still remember the 60’s well. Regards, Bill Howell.”

Sadly, Mike Clements passed away January of 2021 at age 69 from COVID. My condolences to wife Kim and his family. Mike wrote a book, titled, The Crew Chief’s Son, which tells the story of Rex White and Louie Clements racing together. It’s available from McFarland Publishers or on Amazon. It’s also available as a Kindle edition for just $9.99.

In summary, have at it boys, the final count is just 14.

(Greg Zyla is a syndicated auto columnist who welcomes reader questions on collector cars and auto nostalgia at greg@gregzyla.com).