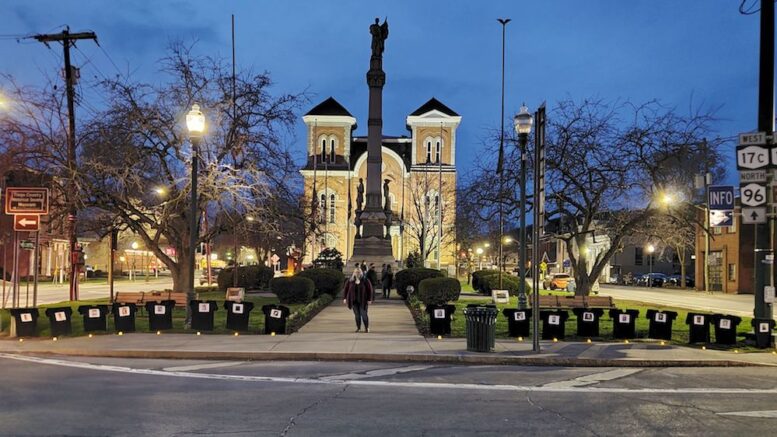 A grim display of t-shirts bearing the names, faces, and ages of the victims of both the Boulder and Atlanta killings adorns the front of the courthouse with tea-light candles illuminating the faces of the victims, a memorial for 18 lives cut short. Photo credit: Luca Iorga.

Owego for Equality is an anti-racist reform advocacy group that has been a staple at the Tioga County Courthouse over the past year; we held demonstrations throughout 2020. Owego for Equality advocates for policy implementation that is inclusive of all Americans, including police reform and accountability, and equal treatment of citizens under the law.

Among our commitments, we engaged in 100 days of consecutive peaceful protest following the police murder of George Floyd, an unarmed Black man. Owego for Equality’s goals include raising community awareness, connecting small town America to the national conversations surrounding major issues, and generally pushing back on the dangerous apathy evident in the (untrue) sentiment, “This doesn’t happen here, so why should we care?”

The year 2020 was a busy year for our small town activists; 2021 has proven to be very busy already, as well.

Here are some scenes of a few of our recent advocacy activities.

It’s March 21, and a crowd nearing 50 people has gathered in front of the Tioga County Courthouse. This crowd is composed of secular activists, church members, concerned community citizens, and local elected leadership. They are there to participate in a candlelight vigil organized by Owego for Equality.

The purpose of this vigil is to mourn the victims of the Atlanta, Ga. gun massacre that took place on March 16, and to condemn the acts of racially fueled violence and xenophobia against the Asian American and Pacific Islander (AAPI) community that have occurred during the past year, and altogether.

In Atlanta, the murderer, a white male in his 20s who had legally obtained his gun just hours before the attack, was taken into custody by police without injury. Back in Owego at the vigil, an Asian American woman standing alone in front of the crowd thanks her community for showing up. 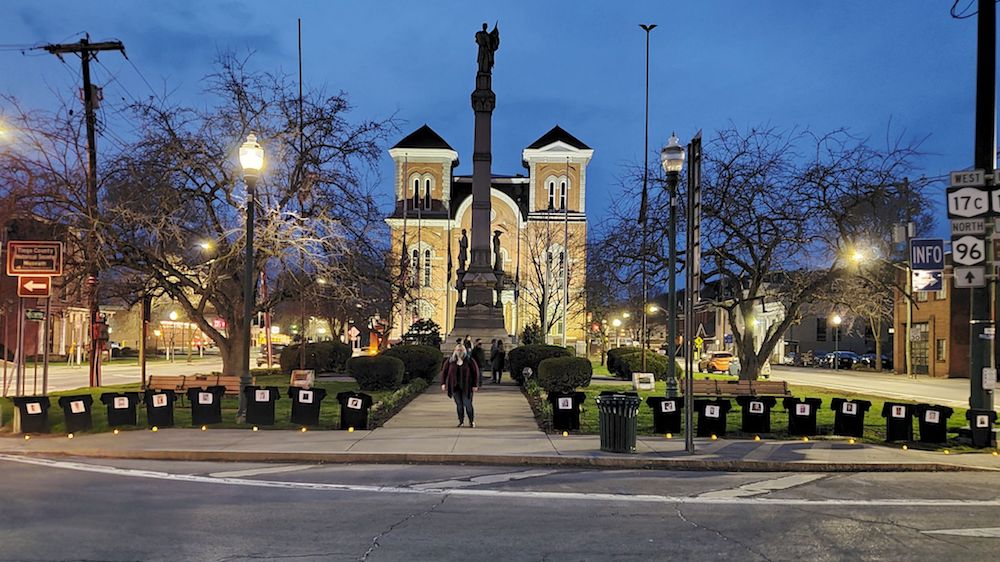 A grim display of t-shirts bearing the names, faces, and ages of the victims of both the Boulder and Atlanta killings adorns the front of the courthouse with tea-light candles illuminating the faces of the victims, a memorial for 18 lives cut short. Photo credit: Luca Iorga.

It’s March 22, and a gunman with a documented record of assault has used a legally obtained (and legally modified) semi-automatic pistol to fire into a crowd of people at a Boulder, Colorado supermarket. Just days prior, a Colorado judge (with the backing of the NRA) had struck down a ban on high-capacity magazines and assault rifles.

The murderer, a light skinned male in his 20s, was taken into custody by police without injury. It is not until after he has been successfully taken into custody that it is made public that, while visibly pale-skinned, the man is not white, but passes as white. Still reeling from the vigil of the prior night, Owego for Equality begins planning their response, remarking on how it is a deeply disturbing day in America when there is need to consider the logistics of sequentially mourning mass shooting victims, due to the shootings’ close proximity to one another.

It’s March 27, and Owego for Equality hosts an anti-gun violence and gun law reform demonstration in front of the Tioga County Courthouse. Peaceful demonstrators carry signs that read “Stop using 18th century laws for 21st century weapons,” with additional signage emphasizing the need for “Action and Policy” instead of “Thoughts and Prayers,” and visual reminders of the fact that when the Second Amendment was written, handheld assault weapons capable of murdering up to 60 people a minute did not exist. 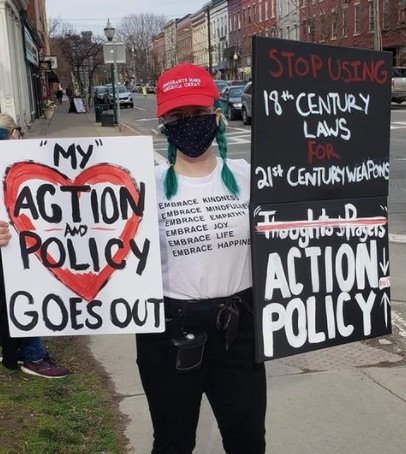 This time, local leadership does not attend, although invitations were extended. This time, participation is only by the activists. They chat and play 90’s music on a small portable speaker to keep up morale. While they get honks of support for practicing their constitutional rights, they are also given the middle finger and screamed at, told that “Guns keep people safe, liberals don’t!”

They are filmed by drivers on their phones, who slow down to intimidate them. Ever-present among the verbal abuse is the angry, aggressive assertion, “Get a job and go home!”

It’s April 3, and, at the request of the community, Owego for Equality hosts its second vigil. This vigil had originally been planned for March 28, and following the anti-gun violence / reform demonstration, but was postponed due to severe thunderstorms. Now, a grim display of t-shirts bearing the names, faces, and ages of the victims of both the Boulder and Atlanta killings adorns the front of the courthouse with tea-light candles illuminating the faces of the victims, a memorial for 18 lives cut short.

Irena Raia, founding member of Owego for Equality, gives a speech suggesting the urgent need for a conversational reframe, a shift of focus from “Why does this keep happening” to “How can we prevent this from occurring so frequently,” accompanied by calls for policy and reform that reflect preventative action instead of regretful reaction. 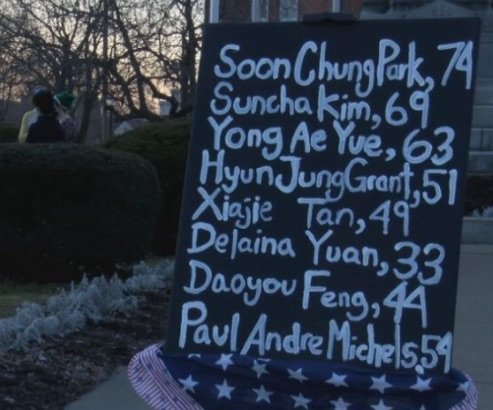 Names of the victims of the Atlanta murder are displayed at the Couthouse Square in Owego. Provided photo.

On April 3, Raia reminds the crowd that preventable and violent acts like the horrific events in Boulder and Atlanta can happen – and have happened – here at home. Raia notes that this vigil marks the 12-year anniversary of the mass shooting at the American Civic Association (ACA) in Binghamton. The ACA tragedy claimed 14 lives while also bearing the hallmark of its association with legally obtained semi-automatic weapons.

Bruce Gillette, Pastor of the First Presbyterian Union Church and a frequent speaker at Owego for Equality events, leaves those present with these haunting words, “We’ve got to stop meeting like this – and I am not saying that to be funny.”

Since that night, even more mass shootings have occurred; sometimes it can feel nearly impossible to keep up with the level of relentless violence. Despite burnout, advocating for policy reform must continue, even when doing so feels like pleading into a void, and even when the sense of coming full circle is heavy. The recent murder of Daunte Wright, a 20-year-old, unarmed, black father at the hands of a veteran cop, at what should have been a routine traffic stop, is a brutal contrast with the knowledge that the light-skinned murderers at the Georgia and Colorado mass shootings were apprehended alive, and without incident.

To adopt and adapt Pastor Gillette’s phrase, unarmed black people have got to stop dying like this, and it’s going to take a whole village.

You can join Owego for Equality at their next demonstration, located (as always) at the Tioga County Courthouse, on Sunday, April 18, from 4 to 6 p.m., or find them on Facebook @OwegoForEquality. The author, Irena Raia, can be contacted at runwithraia@gmail.com.

Be the first to comment on "Guest Editorial: Making Space for Collective Anguish and Action; A View into the World of Small Town American Activism"