Ms. Sue Heavenrich’s latest addition to the catalog of literature for instructing children about the intricacies and complexities of the insect world is winning accolades from both the professional world of the book industry and general readers alike, but not from the world of pitcher plants.

Both the Carnivorous Insectivoire Anti-Defamation League (CIADL) and Pitcher Plants United (PPU) were at first very excited to hear that through their various publications, such as “Insect World” and “The Flying Insect Bulletin,” that publication was imminent. Upon learning that pitcher plants, one of the most effective means of disposing of flies and other noxious insects, had not been included in the top 13 was a severe blow to their pride and self-esteem. 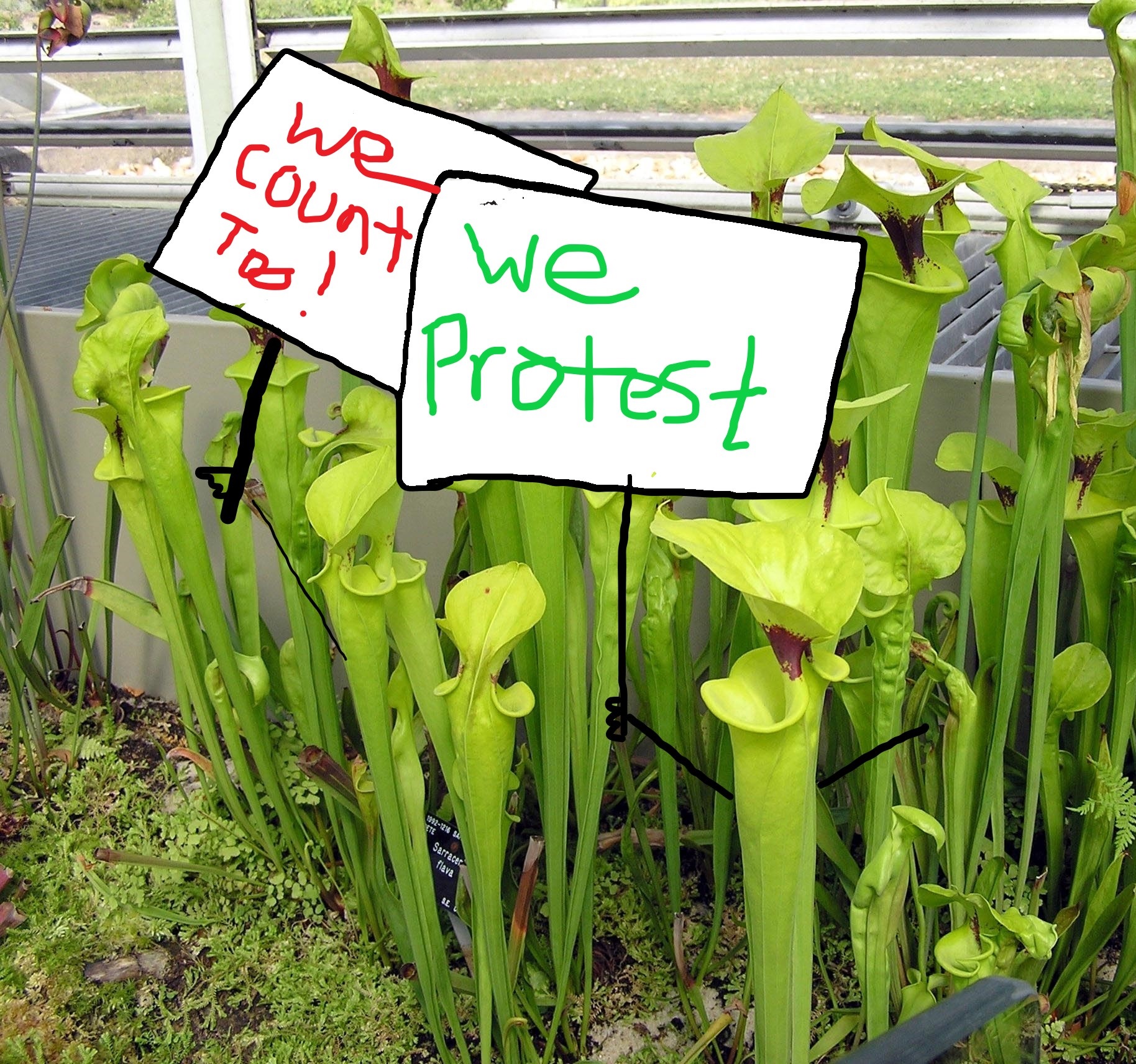 To this effect, CIADL and PPU issued a joint statement that appeared on their respective Facebook profiles:

“We commend Ms. Heavenrich’s latest publication to inform children and the general public about the world of insects coupled with a clever way to learn numbers, but we were crestfallen upon learning that our efforts in this regard had not been included. Pitcher plants populate a niche in the environment where poor soil conditions exclude a vast array of the plant kingdom. To this end we supplement this lack of nutrients with a variety of candidates from the world of six-legged creatures.

“We drown our prospective meals in nectar before various digestive juices consume the various parts of some hapless inhabitant of the insect world. We like to think that our prospective meals lapsed into unconsciousness with something of a beatific grin rather than some pain-inflicted grimace. Doesn’t that count as much as being zapped, wrapped, water bound, snatched, poked, soaked, liquefied, zombified, or all the other ways to have listed, promoted and ‘glorified’ in your publication?

“In addition we cooperate with insect larvae that assist us as we assist them in a mutual effort to survive and thrive in the ‘survival of the fittest’ plant world. And lets not forget our symbiotic relation to tree shrews who feast on our nectar without getting trapped as they use our receptacles for a private place to relieve themselves. These deposits provide us with valuable nitrates and other nutrients as well.

“Ms. Heavenrich, copies of your book are ‘flying off the shelves’ of our respective outlets for news and literature. Perhaps this controversy has actually boosted your sales, but we do plead with you that your future writing efforts will give us proper notoriety in the world of plants.”

Ms. Heavenrich did respond to their concerns:

“Please accept my apologies for not including you in ‘13 Ways to Eat a Fly.’ As you are well aware, there are thousands of species of which flies are an important part of their diet and there were only so many that I could profile. I assure you that I will do my best to highlight and promote the role of pitcher plants in future writing efforts.”

“13 Ways To Eat A Fly” can be purchased at Riverow Bookshop in Owego or on Amazon.