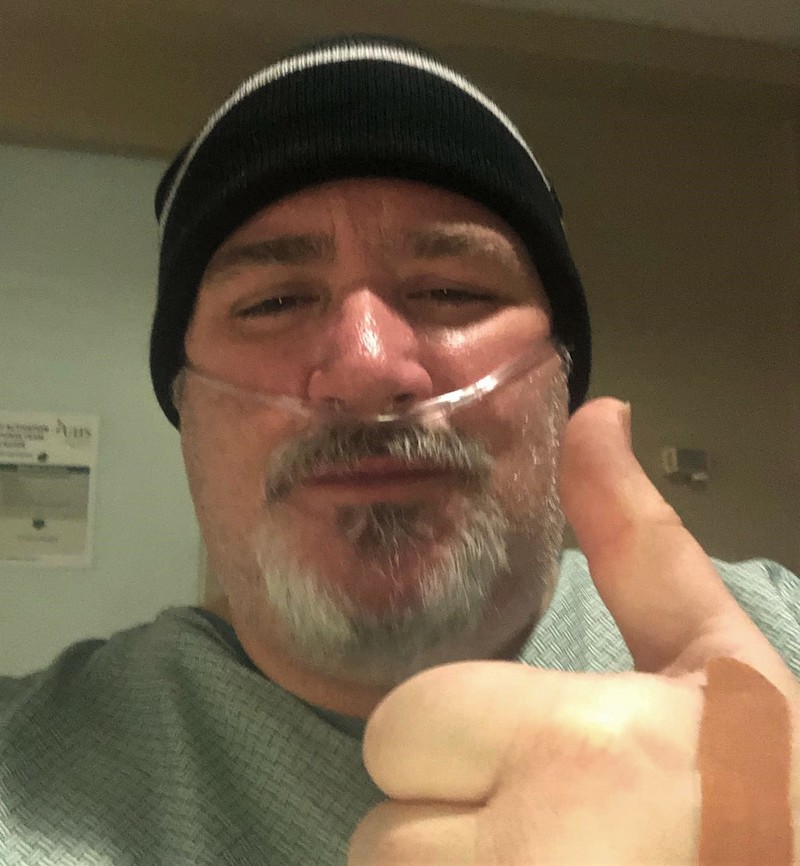 Jack Kalb, of Endicott, hopes that by sharing his COVID story it will lift the spirits of others, and, “Recognize the heroes that are making such a difference in so many lives.” Provided photo.

When Jack Kalb developed flu-like symptoms shortly after the New Year, he wasn’t worried at first. Chills and fever that often accompany flu stuck with him for several days, but when he began experiencing changes in his breathing, concern kicked in.

A friend suggested that Kalb check his oxygen saturation level. Jack used an O2 sensor, and something available for purchase on-line or at most pharmacies. His result returned a below-normal reading.

Not long after, Kalb, an Endicott resident, found himself being admitted to the Wilson Hospital COVID unit, and where, he remarked, “I was dealing with a rapidly declining ability to breathe.”

Kalb continued, “I was terrified on so many levels. First and foremost, I had an obvious lack of understanding of this virus,” and then began to wonder, “If my personal pre-existing conditions played a part.”

At age 50, Kalb acknowledged that he is overweight and had a higher than normal blood sugar level.

It was the oxygen saturation reading, Kalb said, that triggered him to get checked out, and is convinced had he not done that, the disease could have attacked his lungs more seriously. He suggests others consider doing the same.

How Jack’s COVID-pneumonia diagnosis came to be, he is unsure, and couldn’t trace it back to anything specific.

Kalb explained that he and his wife, Treena, had been respecting recommendations about social distancing, and also made sure they only gathered in small groups. Treena was working a normal schedule, but Kalb’s schedule had been winding down in construction due to the winter season. In an effort to be proactive and reduce their risk of COVID, the couple were taking several types of vitamins together and focusing on other healthy choices.

Back in the unit, Kalb said that in the initial onset he was filled with self-doubt, and had thoughts about never seeing his family and friends again. His wife remained at home with her own symptoms.

Kalb remarked that the first two or three days were the most harrowing, and where he found it, “Really hard to breathe.”

At the end of about Day 2, Kalb said he felt more reassured when, “A treatment plan was put in place and I concentrated on ‘one breath at a time.’” Kalb’s “Oxygen Team” helped him through the process.

As vitals were checked every two hours during his stay from Feb. 2 through Feb. 9, Kalb chuckled, “Treatment injections (including Remdesivir) went into what seemed like every single vein I had.”

When Day 3 or 4 approached, Kalb shared that he went through, “A horrible morning of coughing.”

Soon after, Kalb was told, “It’s time for a ventilator,” and not what he wanted to hear.

He then reached out for support from friends in the medical field, and, in turn, was able to work through an alternative treatment plan that called for “aggressive oxygen,” or forcing more oxygen in at a higher level.

Kalb said he saw a better breathing rhythm within a few days, and called the treatment “blasting oxygen.”

Kalb credits a circle of heroes for his care. Noted is the Oxygen Team, along with the nursing staff and doctors, the hospital aides, housekeepers and food service personnel.

Kalb shared a thank-you letter to the Wilson COVID unit staff, which stated, in part,

“Dear Heroes, I want to thank the entire team at the Wilson COVID unit. My level of care far exceeded any expectations or understanding I had,” adding, “The care felt real, and I could feel the pride. It felt like it was coming from the heart!”

Kalb continued, “During this horrible time in my life you all shined so bright and are exceptional human beings. You all took part in saving my life and I am forever grateful and I will never forget.”

Kalb is also appreciative of the entire community who rallied behind him, and thanks everyone for the “massive prayer chain.”

After a week-plus at home, Kalb said he is getting better every day. As of Feb. 17, Kalb received good news from his doctor that his “lungs were very clear.” Moving forward, he will slowly reintroduce tasks, do breathing exercises, and go for follow-up tests. The goal is to be “all clear” in about three months.

By sharing his story, Kalb hopes that it will lift the spirits of others, and, “Recognize the heroes that are making such a difference in so many lives.”

Be the first to comment on "One breath at a time"