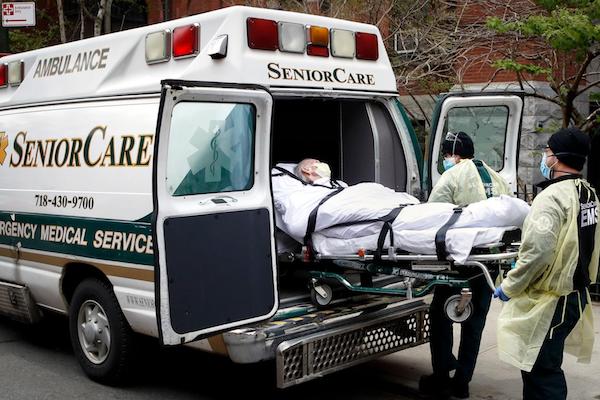 A patient is loaded into an ambulance by emergency medical workers on April 17, 2020, outside Cobble Hill Health Center in the Brooklyn borough of New York. The nursing home has seen multiple deaths from the coronavirus outbreak. John Minchillo / AP photo

Posted By: By Steve Bittenbender | The Center Square contributor February 21, 2021

(The Center square) – New York Republican officials at both the state and federal levels said they welcomed the investigation of the Cuomo administration for its handling of nursing homes during the COVID-19 pandemic.

The statements come after a report Wednesday evening by the Albany Times-Union, which stated the Federal Bureau of Investigation and the U.S. Attorney for New York’s Eastern District were in the early stages of a review into Cuomo’s task force.

The report comes after Cuomo attacked a Democratic assemblyman in the news media who claimed the governor had obstructed justice by withholding information on nursing home deaths due to the virus.

Senate Minority Leader Rob Ortt, R-North Tonawanda, said in a statement Thursday there’s a “growing cloud” looming above the administration. While the investigation looks at just the nursing home issue, Ortt also criticized the administration for their handling of the vaccine rollout, as well as for the number of departures within the state Department of Health in recent months.

“If this investigation reveals deliberate obstruction, as I suspect it will, the Legislature must move toward impeachment,” Ortt said.

In a statement, U.S. Rep Elise Stefanik, R-Schuylerville, said the FBI and U.S. Attorney’s work represents “an important first step towards justice and accountability.” She said it should also provide answers for thousands of New York families whose parents and elderly relatives residing in long-term care facilities died from COVID-19.

She also called on state lawmakers to take their own action against the governor as well.

“In light of this news, the New York State Legislature must immediately revoke the Governor’s emergency powers,” she said. “The State Senate and Assembly should immediately issue subpoenas to the Governor and his senior staff.”

Meanwhile in the U.S. Senate, Republican members of the Senate Judiciary Committee on Thursday said they would ask Merrick Garland, President Biden’s nominee for U.S. attorney general, whether he will commit to investigating Cuomo.

“The American people deserve to know the extent to which Governor Cuomo and his senior staff violated the civil rights of New York seniors, lied to the Department of Justice about their actions, and violated federal civil and criminal laws in the process,” the GOP lawmakers said.

A spokeswoman for Senate Majority Leader Chuck Schumer, D-N.Y., told CNY Central on Thursday that the senator “trusts” the reported investigation will seek the facts and not face any outside interference.

Be the first to comment on "Amid word of new federal probes into Cuomo administration’s COVID-19 response, Republicans push for more"