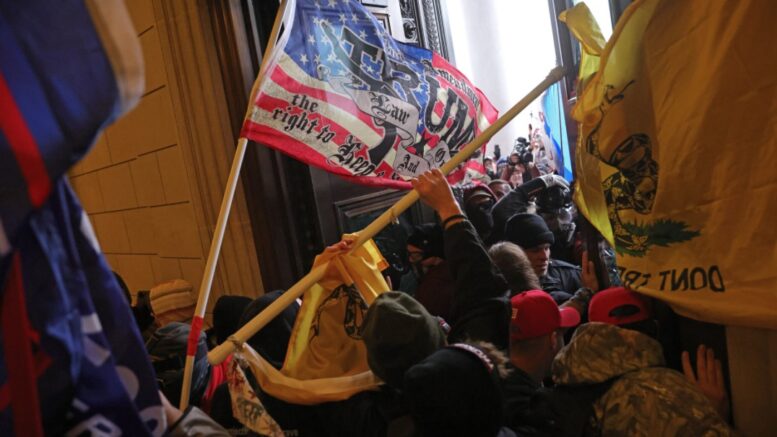 The insurrection at our nation’s Capitol might seem far removed from our small town lives, but it is not; nor is it an event that appeared out of nowhere. I write this after my post echoing this sentiment to the “Village of Owego – Community Forum”, a Facebook group promising uncensored access to community members, was suddenly taken down / hidden. Clearly that access does not apply to public criticism and community discussion of sedition, or the actions of the elected officials who enabled it.

Before this post was censored, someone in the comments asked me a fair question: “What does this have to do with Owego,” and I am grateful I have the opportunity to answer here. It has everything to do with our town. My post read as follows:

“We are living through an attempted violent coup at our nation’s Capitol today, at the hands of domestic terrorists, drummed up by the rhetoric of a sitting president. We are witness to the dangers of unchecked misinformation; dog whistling, and hateful rhetoric encouraged and allowed to continue by Republican politicians who stood to benefit from the support of a tyrant. We are witness to how news-turned-propaganda and widespread media illiteracy can lead to violence. We are witness to the extraordinary privilege afforded white people in this country. We are witness to the stunning but predictable hypocrisy of those from the “law and order / protect the sanctity of the Constitution” camp, applicable only to the already oppressed and downtrodden. We are witness to the astonishing dichotomy of how our media, how our police forces, how our politicians treat and frame this event as opposed to how it met with peaceful protests decrying the butchering of Black and brown bodies this past summer. We have a role in this and we must not forget or deny it.”

Owego is part of the United States of America, and yesterday our Capitol was attacked for doing the people’s business, our business; our halls of justice desecrated, our elected officials terrorized. We as a community should talk about our involvement in this, and if we do not want to talk about it, we should ask ourselves why. We should educate ourselves on the topics of media literacy and how public narratives are shaped and spread via shares on our social platforms. We should learn about political tactics, such as the idea of quietly starting fires you can later publicly take credit for putting out. We should evaluate our own level of civic engagement, and make sure we are registered to vote, and then do so [locally, not just during a presidential election].

We should all be talking about this at our dinner tables, examining how things got to this point. We should ask ourselves how the violent and divisive rhetoric of one man, enabled by those who stood to benefit from his political clout, amplified by social media, and bolstered by the fallacies of “fake news”, “alternative facts” and a general neo-conservative disdain for expertise, resulted in the modern American day that will live in infamy.

Domestic terrorists roamed our sacred halls, equipped with plastic cuffs for taking hostages. They ransacked the offices of elected officials and posed for selfies with police officers. They had weapons stockpiled, and two IEDs were found on the grounds. These terrorists were also carrying pro-Trump flags, Confederate flags, and Nazi white nationalist affiliated clothing and tattoos. They removed the American flag from our Capitol building and replaced it with a Trump 2020 flag instead. They were there, not to protest the continued oppression and murder of Black people at the hands of a taxpayer funded institution like the Black Lives Matter marches of the summer, which is what this domestic terrorist attack is falsely, and intentionally, being equated to, but because a sitting president told them to be there, because he did not win re-election and would not concede.

This false equivalency should not, and cannot stand. Because if we bury our heads in the sand, if we disengage, we will be complicit in paving the way for this to happen again. Owego might be a small town, but we are part of something bigger than ourselves. So, as I said before, as I implore you to consider now: We have a role in this and we must not forget or deny it.

(To contact Irena Theresa Rose Horvatt Raia, she can be reached by email to irenahorvatt@gmail.com.)

6 Comments on "Guest Editorial: Owego might be small, but it’s a part of something much bigger"