Pictured are Peter and Gloria Ward of Candor, N.Y. The couple, wed in 1950, celebrated their seventieth wedding anniversary on Dec. 24. This photo is from their fiftieth anniversary. Provided photo.

Long time Candor, N.Y. residents, Peter and Gloria Ward, celebrated their platinum wedding anniversary on Dec. 24, 2020. The couple, married for a remarkable 70 years, shared their vows at the McKendree Methodist Church in Candor on Christmas Eve in 1950.

While choosing to wed on Dec. 24 holds a romantic essence, the day also proved practical for the couple, and especially since Peter, a student at Cornell University’s College of Agriculture, had a break from school. Gloria, a graduate of Ridley’s Business School in Binghamton, was working as a bookkeeper in Ithaca at the time for the Farmers Production Credit Association.

“I had a week break between Christmas and New Year’s,” Peter said, and then chuckled, “But not as long of a break as students today.” 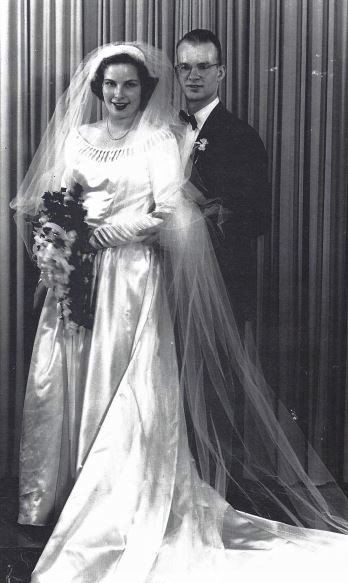 Pictured are Gloria and Peter Ward of Candor, N.Y. The couple celebrated their seventieth wedding anniversary on Dec. 24. Provided photo.

The couple took a week’s wedding trip to New York City. Gloria even wrote her own wedding article for the Candor Courier, which focused on every detail of the nuptials, and today is a keepsake from that special day.

Peter, a native of the area, first met Gloria while at Candor schools. Gloria was born in Brooklyn. N.Y., and also lived in Queens. She moved with her family to Candor just prior to her teen years.

The couple started dating during their sophomore year at Candor High School.  They sang in the chorus together, and Peter played football, basketball and baseball. Gloria was always nearby; she was a sports manager and scorekeeper.

The Candor Class of 1947 graduates recalled a time when an English teacher challenged them to do a project involving the classic Nathaniel Hawthorne novel, “The House of the Seven Gables.” Peter and Gloria opted to create a replica house that received rave reviews, although the first round of construction using Shredded Wheat boxes ended up needing a little makeover.

You can say they’ve been working together, building things together and spending time together ever since. 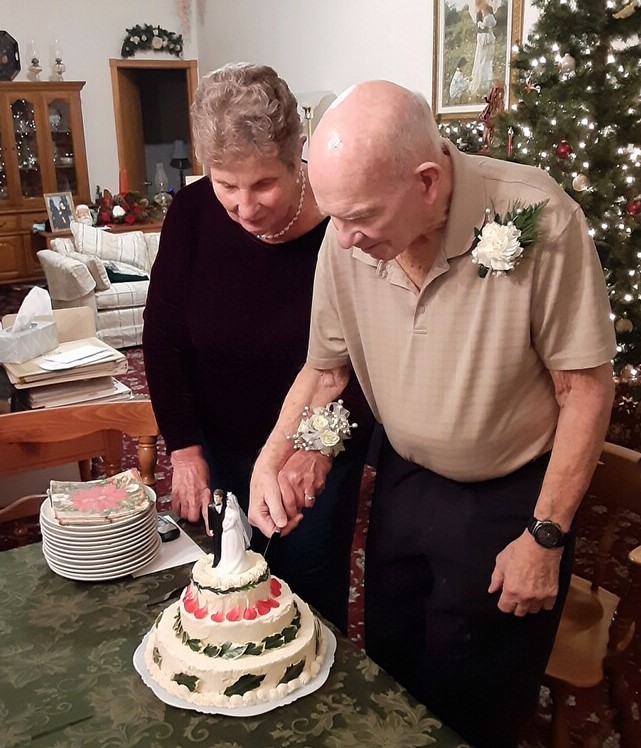 One of the only times they were apart from each other was during Peter’s Korean War service. After graduating from Cornell in 1952, Peter opted to enlist in the ROTC program versus the draft, and which took him to Fort Bragg, N.C. and California.

Shortly after Peter returned home from the service, the couple began a 30-year dairy farm journey that lasted through 1985. Some of that land was later turned into a subdivision, and where they built three houses from start to finish, and today encompasses several lots known as Deerfield Estates.

The couple is proud of their time working the dairy farm, and Peter explained it was good for their children to, “Learn responsibility early.”

The couple’s family includes four children, two boys and two girls, with one daughter who lives nearby, along with 15 grandchildren and 21 great-grandchildren.

And yet another reason to love Dec. 24, Peter and Gloria’s first son was born on Christmas Eve, and on their third wedding anniversary.

Peter, however, didn’t get to see his first-born for nine months. At the time, Peter was serving during the Korean War period. He recalls a time where he made a collect call home to Gloria and enjoyed hearing his son make noises during their conversation. Otherwise, handwritten letters were sent back and forth the old-fashioned away. 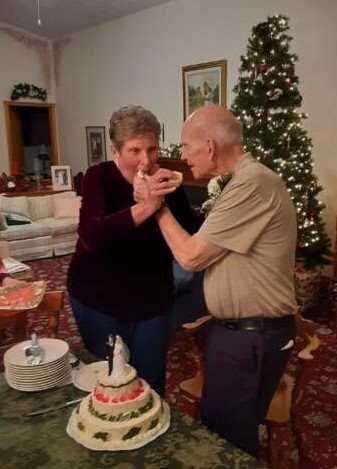 Today, Peter and Gloria are amazed at all of the methods available to stay in touch with their family members, from phone calls to text messages, FaceTime, and others.

Peter remarked, “We do try to have a reunion every year.”

COVID, however, has put a damper on those types of plans. The Ward family extends all across the country now, as far west as Portland, Oregon, and south to North Carolina and Atlanta, and other places in between like St. Louis, Kentucky and Delaware, to name a few.

This year, some family members were able to return home for the Ward’s milestone anniversary celebration, a “Drive-Around Meet and Greet (COVID-Style).” The community was invited to honk their horns as they drove by the Ward’s house on Christmas Eve, and then on Dec. 26, the Drive-Around offered the chance for friends and family to say hello and congratulate the couple using COVID-safe practices.

Gloria remarked, “About 30 people showed up, it was a cold day.” The Ward’s were happy for those who were able to stop by, and visitors were asked to sign a guest book and take home a treat, which was a cleverly designed chocolate bar featuring a sentimental anniversary message.

As for the Ward’s secret to a longstanding marriage, Gloria shared, “It’s important that Christ is the Head of the Household,” and added, “We’ve just enjoyed being together all of these years.”

Peter replied, “You have to find the right person, find the Lord, and need to respect one another and each other’s different points of view.”

The Ward’s hope that 2021 allows for a family reunion again; they especially look forward to seeing their grandchildren.