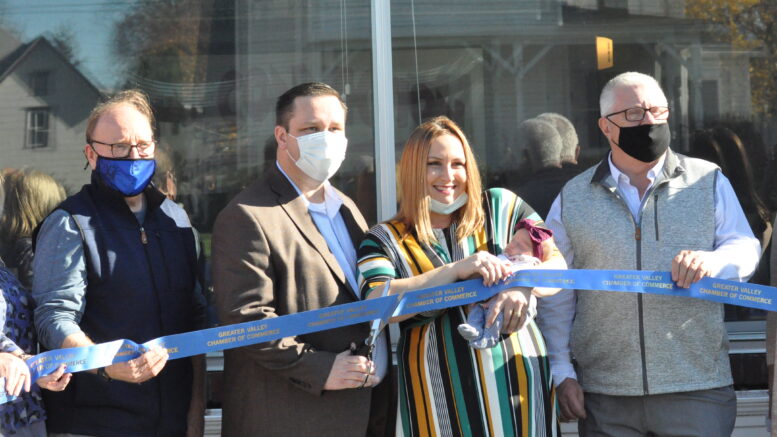 David and Irene Radigan pose with Chuck Carver for a photo just before David cut the ribbon outside of the Choice 102 station on Nov. 10. Photo credit: Samantha Latos, The Daily & Sunday Review.

Posted By: Contributed by The Daily & Sunday Review November 21, 2020

The WATS-WAVR radio stations in Sayre are being sold to David and Irene Radigan of Radigan Broadcasting, LLC once the Federal Communication Commission hands down its approval, which is expected around the end of the year.

The sale of WATS Broadcasting, Inc. was celebrated on Tuesday, Nov. 10, with a ribbon cutting ceremony that welcomed the Radigans to their new business, and signified the end of current owner Chuck Carver’s 44-year tenure at the Choice 102 station once it is complete.

Carver told The Daily Review that he never thought he would retire. He felt that he was good at what he did at both stations and lived three blocks away from the Keystone Avenue location in Sayre for most of his career.

He thanked the community for supporting him ever since he first arrived in Pennsylvania as a recent college graduate.

Carver came to the Valley right out of Ohio State University with a Bachelor of Arts degree in Journalism in 1976. He chuckled as he remembered his original plan of being there for a year to get some experience and then to go back to his “beloved home state of Ohio.”

Career opportunities kept popping up for Carver and kept him in the area; he was soon named the news director and then the station’s general manager.

As the owner retired in 1986, he was given the chance to buy the WATS-WAVR stations with three coworkers.

“As the years went on, I bought them out, and it ended up just being me,” he said.

For 44 years, Carver was up at 4 a.m. every morning giving the news. 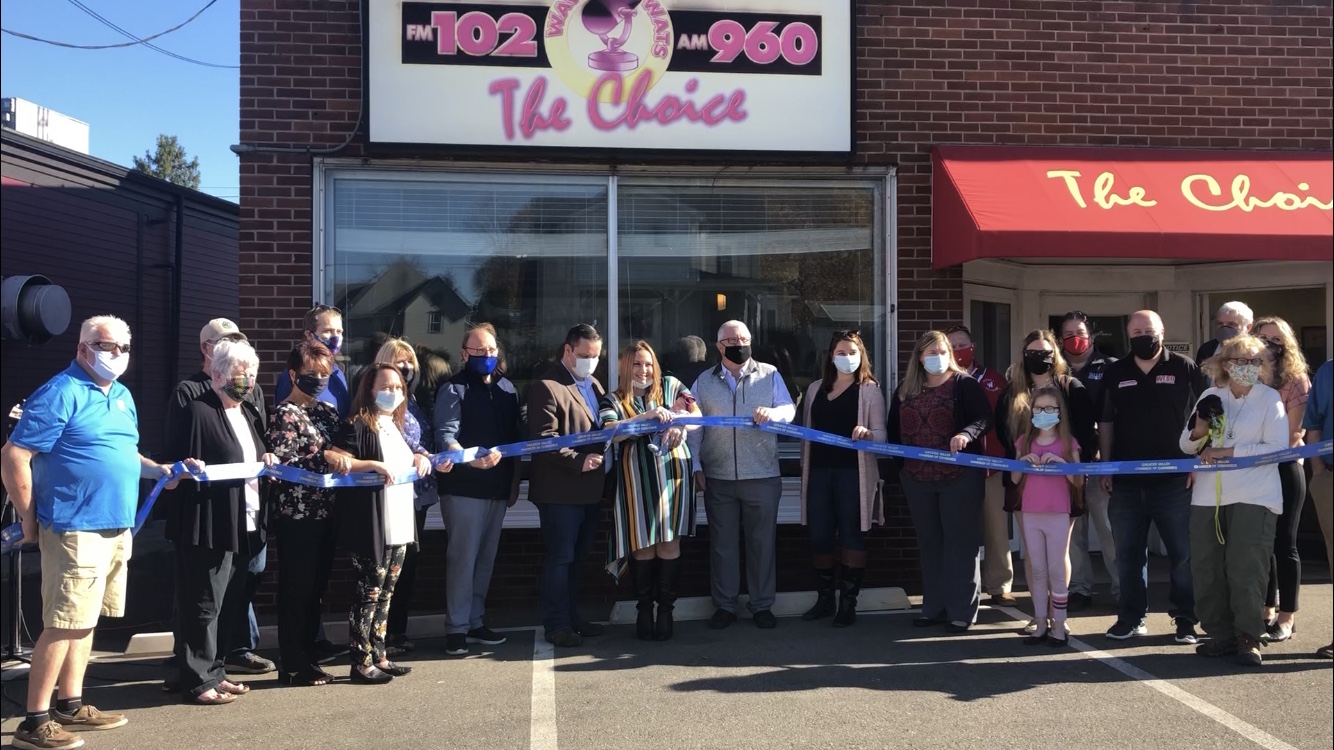 David and Irene Radigan gave an acceptance speech to take on WATS-WAVR to a crowd on Nov. 10 outside of the Choice 102 station. Photo credit: Samantha Latos, The Daily & Sunday Review.

Under Carver’s leadership, Choice 102 won 109 first-place state and/or national awards for programming excellence. The station’s newscast won best in the state 13 times, and the quiz show that he created, “Scholarship Challenge,” has won almost 30 times.

“We’ve been very successful in that regard, but it all goes back to the community,” Carver said, “If you don’t have the advertisers and the listeners to keep you going, it doesn’t matter how good the programming is, you’re not on the air.”

In the last year, Carver and his wife moved out to Lititz, Pennsylvania to be close to their children and grandchildren.

“Of course, technologically, nowadays you can broadcast from the moon if you want, so I kept doing the morning show and the news,” he said. 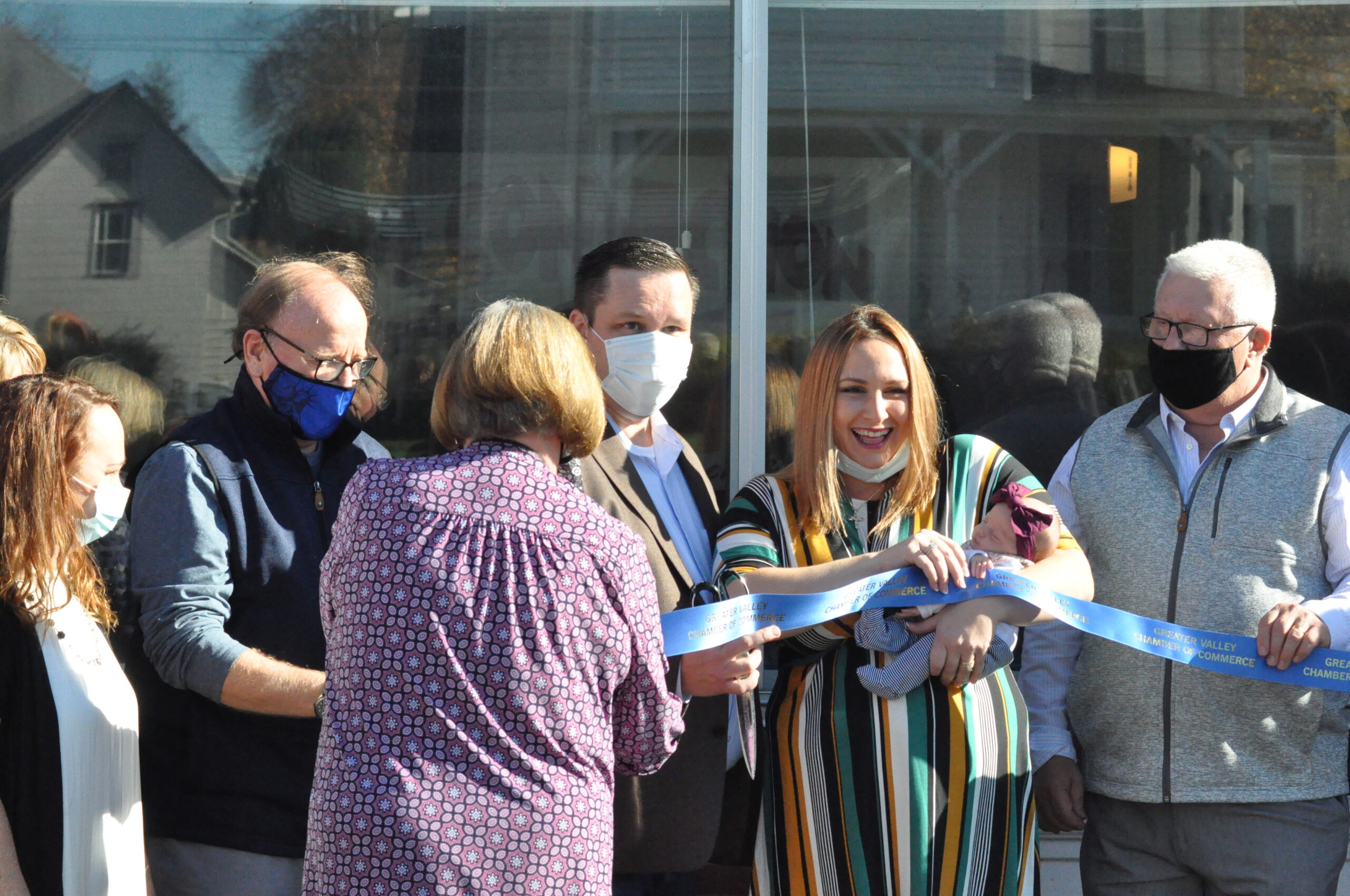 David and Irene Radigan laughed alongside Chuck Carver as baby Emily grabbed onto the ribbon moments before they cut it in front of Choice 102 station. Photo credit: Samantha Latos, The Daily & Sunday Review.

The Radigans noted that they came to Carver interested in buying the stations from him. He wasn’t interested at first, but was impressed with the way they spoke so passionately about serving the community.

“Their commitment was important to me because we’ve had other potential suitors before who were only interested in our license,” Carver said, “They didn’t want the people, the building, or our equipment, they just wanted to take our license to another community.”

He felt good about handing the stations over to business owners who will continue the legacy and expand upon the work he has done for years.

Their admirable track record from owning the WEBO station in Owego since 2006 was a big plus as well. Carver noted the Radigans were “head and shoulders” above the other potential buyers who popped up after hearing that they were interested in purchasing the stations. 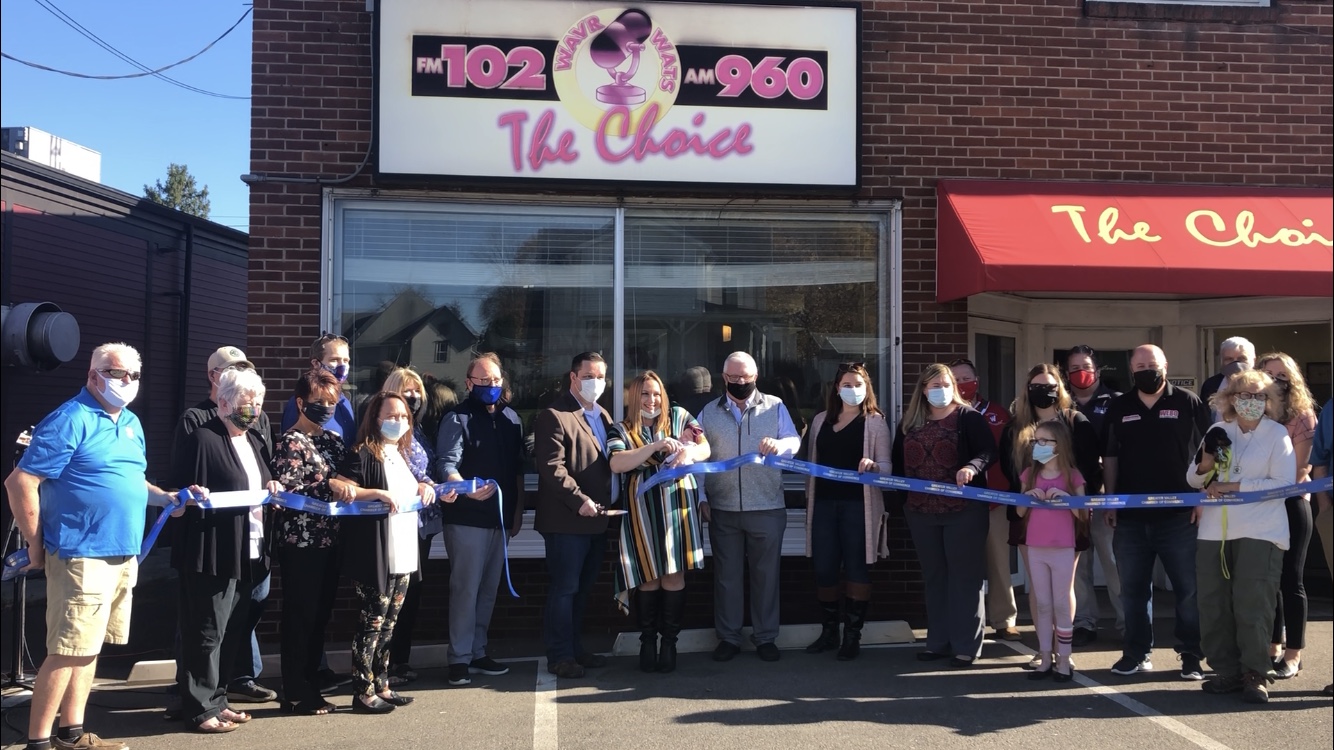 People posed at the WATS-WAVR ribbon cutting ceremony outside of the Choice 102 station on Keystone Avenue in Sayre for a photo on Nov. 10. Photo credit: Samantha Latos, The Daily & Sunday Review.

“Local radio and serving the community is what we’re all about. Being the owners and operators of radio stations in town and not far away is so important to us. I wish I could come up with as great ideas as ‘Scholarship Challenge’ and ‘Christmas is for Kids,’ but I am proud that we will take on those programs and keep doing them here,” David Radigan said in his remarks, and just before the ribbon cutting ceremony.

He thanked the people of Sayre and gave a shout out to he and Irene’s children who were in school, except for baby Emily who was present and in Irene’s arms.

David has been in broadcast journalism since he was 13 years old and has been on the radio for 25 years. He and Irene said that they are “radio people” and that their job is to maintain Carver’s programs and keep the news station going for those in the community.

A crowd gathered in front of the Choice 102 station on Keystone Avenue in Sayre on Nov. 10 for the ribbon cutting passing the station on to David and Irene Radigan. Photo credit: Samantha Latos, The Daily & Sunday Review.

The couple and business partners will continue to run WEBO at its current location on North Avenue in Owego as they take on the WATS-WAVR stations.

They told The Daily Review that they look forward to learning more about the local community and how they can better serve their listeners and advertisers, one step at a time.

Their shared goal is to keep the WATS-WAVR stations as a “community resource, now and always.”