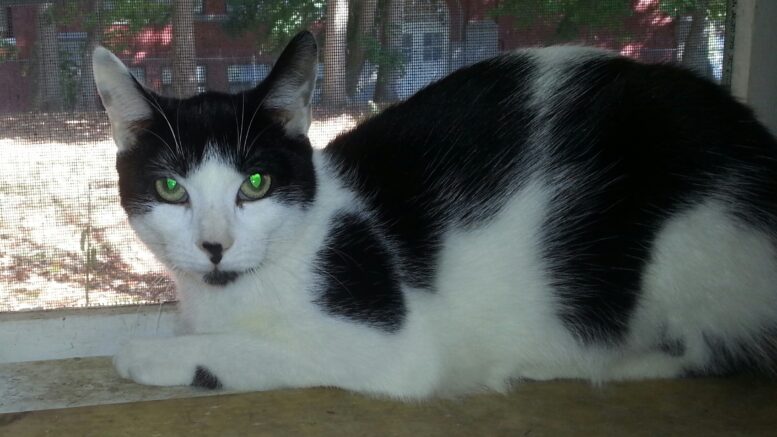 This kitty’s name is Marbles and she is about as feral as a kitty can get while coexisting with humanity, namely me. Marbles came here in October 2015. She was about one year old then.

Marbles came from a feral cat colony in Ulster, Pa. A young woman contacted me crying her eyes out because she was being evicted from her house and she was going to have to leave behind the outdoor cats that she had been feeding for a few years. She had approximately 40 feral cats at the time. No one else would take care of them when she left, and as a matter of fact she suspected that the other person that lived there would probably kill them. He had a target in the back yard and he didn’t like the cats.

This is where I became the ‘crazy cat lady’ because I made approximately eight trips to Ulster and trapped most of them. I wasn’t able to get them all because I just didn’t have room for anymore.

They were all feral and in cages. I managed to find some homes with people who didn’t mind a feral cat or two, and some were not very healthy and died. A couple of farms took around ten total, and I ended up with the rest.

Marbles has been here for five years. She spends most of her time either under my bed or under the couch. She sleeps on my bed occasionally if I am not around or maybe she will hang out in the closet.

I can actually get quite close to her now, but she does not want to be touched. Most of the other ones from down there have come around to being people friendly or have passed away. They were not very healthy.

Spitfire from the Oct. 18 posting was from her colony but he was just a little kitten when he came here, she was full-grown. Her life is quite simple. I bring her a dish with canned food on it for breakfast. She will eat that and then go look for a likely spot for a nap. There is dry food and water in several locations all day and then she gets treats before bedtime. How hard is that?

Would you consider donating to help make it possible for her to continue to live here? If you can help, please send your donation to Maddie’s Meadows, P.O. Box 445, Owego, N.Y. 13827. If you would prefer to donate supplies, please call me at (607) 768-6575 to find out what we need. Thank you in advance.

Be the first to comment on "Maddie’s Meadows Pet of the Week for the week of November 17, 2020"