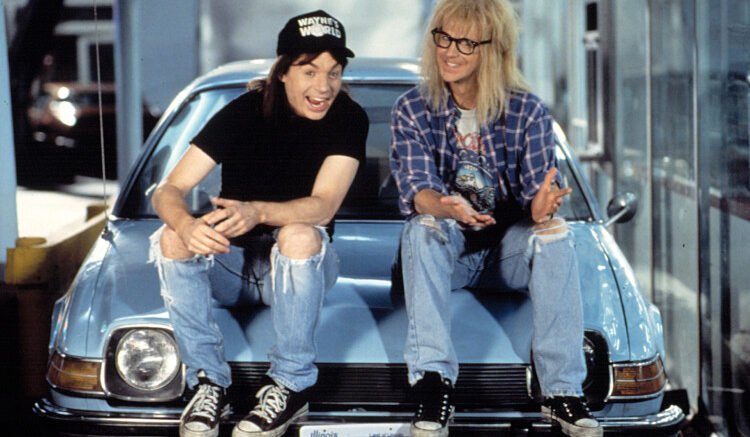 Mike Myers, left, and Dana Carvey sit on the hood of their 1976 AMC Pacer in the 1992 hit movie “Wayne’s World.” By this time, the Pacer had been out of production for 12 years but the movie still ranks high for renewed AMC interest. (Paramount Pictures publicity photo)

Q: Greg, I owned a 1974 AMC Ambassador Custom Brougham 4 dr. sedan back in the 1970s with the 304-V8 engine. What is this car worth today? I read your column in the Cape Cod newspaper and I know you owned AMC cars. How many AMC cars have you owned and what are your feelings on the AMC Pacer and Javelin/AMX? Finally, how many Ambassadors did AMC sell back in 1974?  Bill S., Hyannis, Mass.

A: Bill, American Motors Corporation (AMC) had a very good year in 1974 when it sold a total of 431,798 vehicles of which 17,901 were Ambassador Brougham sedans. The Ambassador and the Matador sedan were same-size siblings with the Ambassador delivering more plush amenities and a more chrome pizzazz.

As for me, I owned a 1974 Matador 4-door sedan with the 304-V8 as I traded two Gottlieb pinball machines called “Paul Bunyan” and “Sing Along” for the car.  To this day, I’m not sure who got the better deal, me or the Chrysler dealer I traded with as neither the Ambassador nor the Matador have set any collector car value records.

On the plus side, I used that ’74 Matador for everyday trips to and from the weekly newspaper office where I worked, and it got fairly good fuel mileage for a V8. (Around 15 MPG if I kept my foot out of it) The car only had about 50,000 miles when I did the trade in 1983, so it was an outdated car in good condition during an era when American manufacturers were building small, fuel-efficient cars. I kept that Matador for about three years, and it never missed a beat. 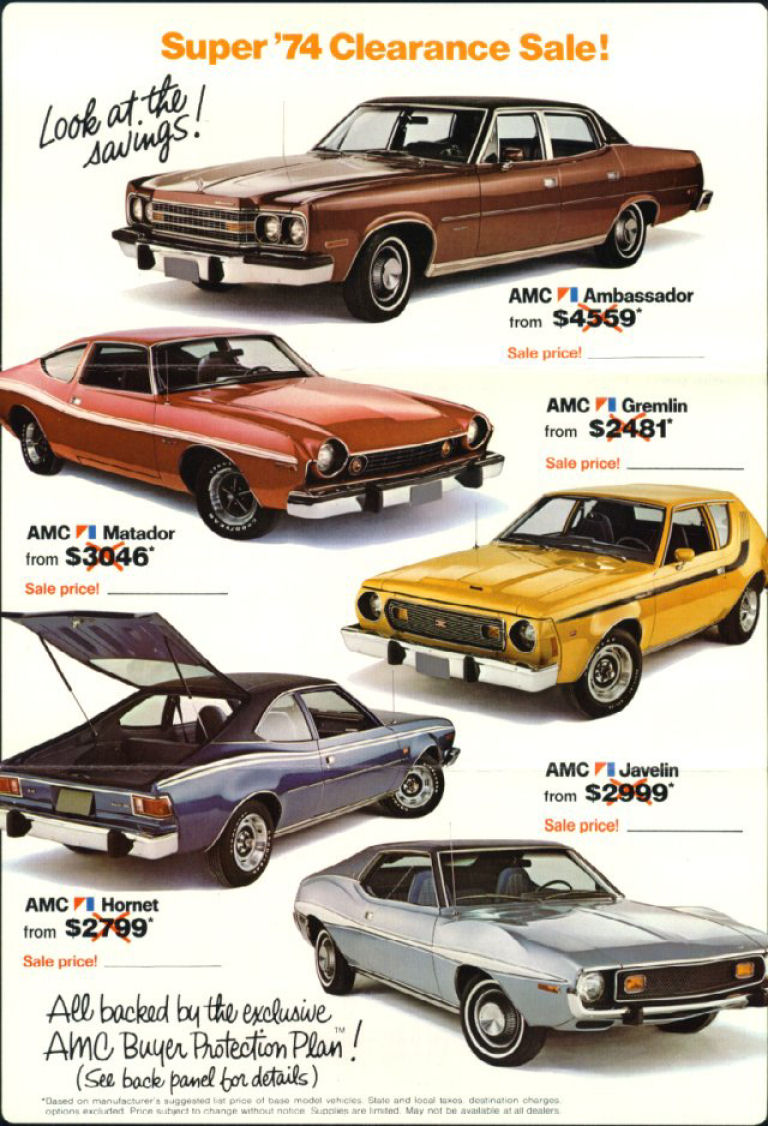 The AMC Ambassador was the top line luxury ‘74 AMC available in full size form. It came standard with a 304-V8 engine although 360 and 401 V8s were also available. Shown here is the complete AMC line for 1974. (Compliments former AMC)

The AMC Pacer, meanwhile, was to be AMC’s breakout success all-new compact car, but it never happened. Produced from 1975 through 1980, the Pacer was built around a spacious, four-passenger cabin and actually looked a bit like an alien bubble car as it was finished with lots of glass everywhere. Pacers were as wide as a full size luxury car of the era, and “Car and Driver” and “Road & Track” magazines both gave it some praise, with the latter calling it one of the 10 best forward-looking designed vehicles.

With the actual in-house prototype designs beginning in 1971, the Pacer was to originally utilize a Rotary Wankel engine, but the extra costs involved, poor Rotary fuel mileage and the fact that we were in a gas crisis in 1973-1975 didn’t help matters.  Thus, the Rotary idea was scrapped at the 11th hour and instead of the Wankel Rotary, AMC decided to use a GM built 4-cylinder engine. However, that deal also dried up so AMC had no other choice but to adapt its inline 6 cylinders, in 232 and 258 inch versions, and later the same 304-V8 that powered our Ambassador and Matador models for Pacer power.

Still, initial first year Pacer sales were quite good as over 145,000 consumers signed on the dotted line. But by 1980, the total of all six years of selling amounted to only 280,000 and the Pacer went away quickly from the AMC lineup. In its place came the AMC Spirit, a car that I also personally owned in 1979 and it came with a Volkswagen built 4-cylinder engine and it was a really nice car.

Today, you can probably own a well-restored Pacer for $5,000, which is what Haggerty Insurance rates the value of the ’75 Pacer with the 232 6-cylinder. The Pacer received its best, albeit late, publicity thanks to Mike Myers and Dana Carvey who rode around in Garth’s (played by Carvey) 1976 AMC Pacer in the 1992 hit movie “Wayne’s World.” 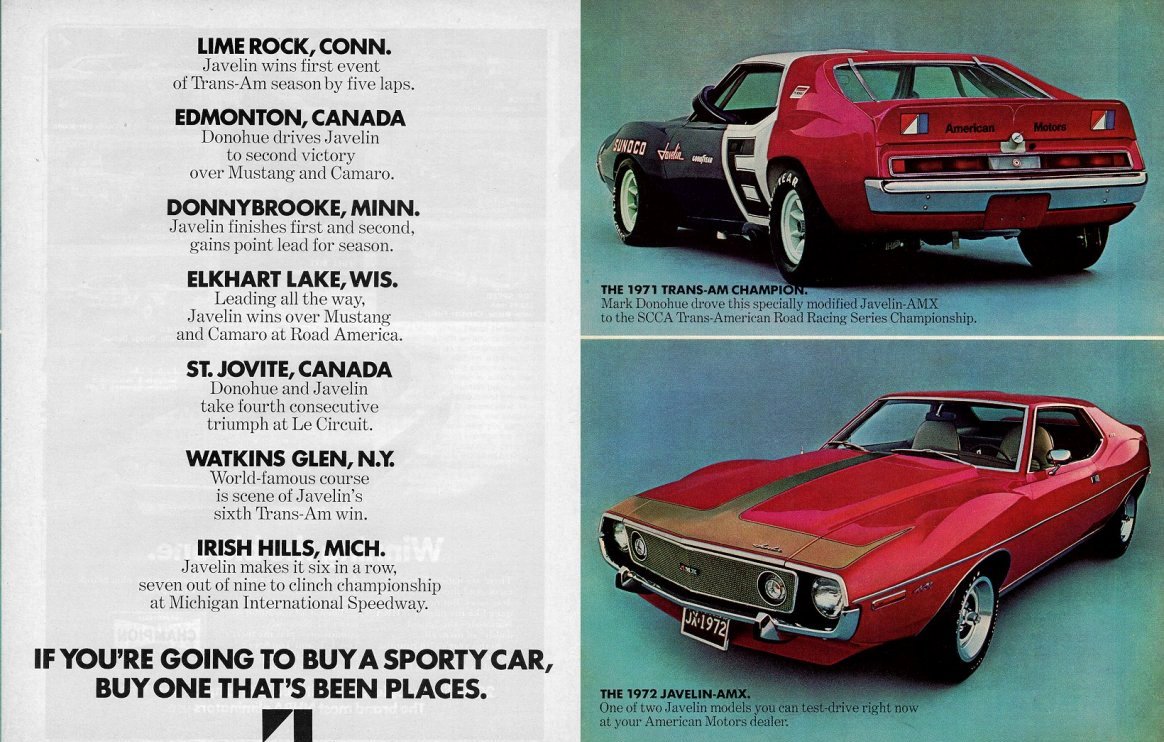 As for AMC ownership, I also owned a new 1974 Hornet X 258, a new 1976 Gremlin X 258, along with the aforementioned ’73 Matador and low-mileage ’79 Spirit. Again, all of which I used for selling newspaper advertising. I always felt AMC offered low cost, dependable transportation and to this day I still own a 1980 AMC Concord 258-inch six with just 27,000 miles that I purchased about five-years ago.

In ending, the Javelin and AMX were two of the best looking AMCs ever built and to this day look pretty good sitting next to modern day Mustangs. If you owned a Javelin/AMX with the 390 V8 Go-Package or later one of the 401-V8s, you had one nice, hot AMC.

The Javelin was available from 1968 to 1974 while the AMX in two-seater form was only available from 1968 to 1970. Notable is that Roger Penske led AMC Javelin to two Trans-Am Championships in 1971 and 1972, but. I’ll keep some of this info for another week as I have a reader that has asked about the AMC Matador coupe winning NASCAR success, also headed-up by Penske.

Stay tuned, there are more AMC columns coming and thanks for your letter. Long live those wonderful Ramblers and AMCs.

(Greg Zyla is a syndicated auto columnist who welcomes reader inquiries on collector cars, auto nostalgia and motorsports at 303 Roosevelt St., Sayre, Pa. 18840 or at greg@gregzyla.com).