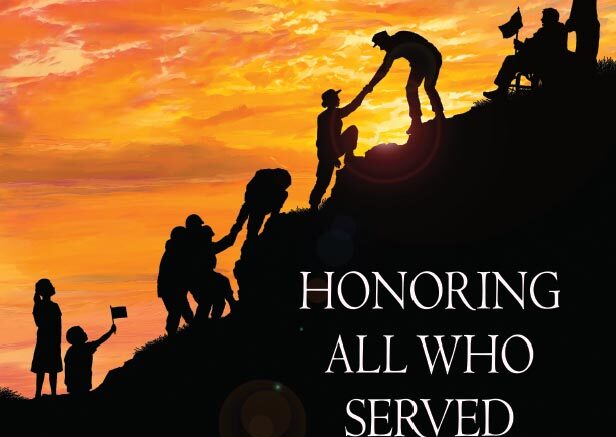 Veterans Day is this Wednesday. Unlike Memorial Day, which pays tribute to those who died serving the military, Veterans Day honors all who served. The younger generation may appreciate a backgrounder on the topic; seasoned generation may use it as a review.

The Great War, World War I, officially ended when the Treaty of Versailles was signed on June 28, 1919. The treaty came after seven months of on again off-again combat when the adversaries put a temporary stoppage in place on Nov. 11, 1918 – the eleventh hour of the eleventh day of the eleventh month. The stoppage was also called an armistice. The term, the war to end all wars, was widely used to mark the armistice.

Nov. 11, 1919, was the inaugural Armistice Day observance, as proclaimed by President Woodrow Wilson.

Federal legislation in 1918 made Nov. 11 of each year a legal holiday – Armistice Day. But given World War II in the 1940s, Korea in the 50s, and the mobilization of hundreds of thousands of soldiers, sailors, Marines and air corps (later Air Force), Congress amended the 1938 act in 1954 with the term Veterans instead of Armistice.

Old school patriotism and historic pride has kept Veterans Day on Nov. 11 since 1978, regardless of the day of the week. It honors America’s vets for their duty, service, patriotism and sacrifice for the greater good.

The profile of the veteran is changing. They are older and less healthy. U.S. Department of Veterans Affairs says 389,000 of the 16 million veterans who served in World War II were alive in 2019. Almost 300 die each day. Vietnam era veterans likely have a median age greater than 68 years. Memories are fading with each passing, regardless of the military branch of service.

Thanking a vet is easier said than done. Many are unassuming but likely can be found next door or in the neighborhood. Thank all veterans. Honor all who served.

Ask a veteran about their time in the military, and listen to the answer. Hang an American flag in your front yard. Ask an aging veteran to share with you the song that most takes them back. Visit the gravesite of a veteran, say his name out loud, and thank him for his service and sacrifice. Take dinner to a veteran. Take flowers or a wreath to a veteran’s memorial.

Write and send a letter to someone who’s currently serving in the military or residing at home or Riverview Manor, Elderwood of Waverly, or Oxford Veterans Home. Call a veteran family member. Thank a veteran co-worker for their service. Take a private moment to be proud of your country. Teach someone (a child, a friend, a neighbor) what it means to be a veteran.

Say a silent prayer for those who are serving. Observe a moment of silence with family and friends. Get a Buddy Poppy. Wear it all day, attach it to your purse or bag and keep it there until it falls apart. When people ask what it is, tell them. Read and share the poem, “In Flanders Field the poppies grow.” Write on social media about your appreciation for veterans.

Make sure our children and grandchildren know who the veterans are within their own family, and share the family stories with them. Do a project about veterans with young children or grandchildren. For example, let them make their own veterans flag and plant it on a pot of flowers in front of the house.

Take a moment to reflect on what it means to live in America. Take a quiet moment and imagine hearing “taps” played in your head. Think about what it means. Send an email that tells a veterans story to the people on your contact list.

But not this year because of the pandemic. Alternative is WEBO AM FM Radio. Two other major veteran celebrations won’t be held. Elderwood of Waverly always honors its veterans in its first floor lobby, the Valley Elks, Color Guard, tributes from Valley Mayors, and profiles of veterans read out loud ending with a thank you card, cake and ice cream.

Central Baptist Church – Greene Pastor Norman Reeder of Owego will remember the late Owego Pastor G. Terry Steenburg for his role as Chaplain to the Veterans of Modern Warfare and the Owego’s Wreaths Across America Program.

Tioga County’s Fallen Heroes will be remembered in a short ceremony at 11 a.m. by Post 1371 VFW Honor Guard at the Tioga County Veterans Memorial. Vietnam Veteran Dean Morgan does the memorial reading. Vietnam Veteran and Deacon Mike Donovan will render the benediction and Veteran Steve Palinosky will play Taps.

What else can be done by the community. “Toot” the Central Fire Station and Flats Fire Station Fire Alarm for two minutes or 11 times. Ring the church bells 11 times. Play the chimes at St. Paul’s Church. Place Thank You Veterans banners and signs on both sides of the North Avenue Underpass and entrances / exits to Owego. Or you can pause voluntarily for two minutes to honor the sacrifice of veterans at 2:11 p.m.

Be the first to comment on "Veterans Day in Tioga County"