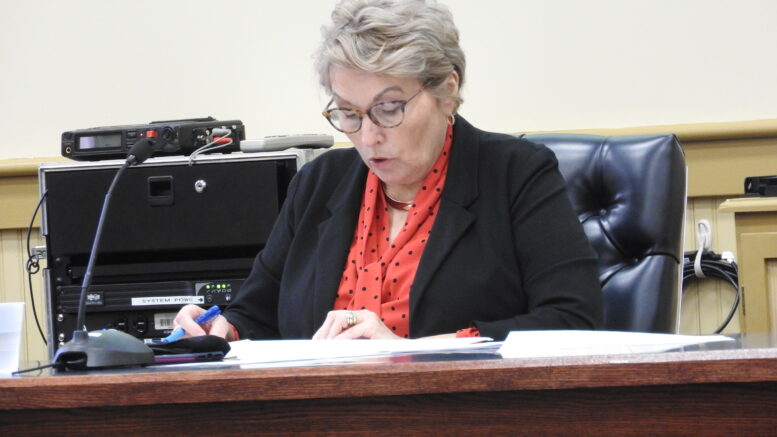 Legislative Chairwoman Martha Sauerbrey is pictured during Tuesday’s meeting that addressed recycling as a service in Tioga County. (Photo by Wendy Post)

On Tuesday, Oct. 13, Tioga County’s Legislature passed a resolution that will repeal the former recycling law, and establish a new Tioga County Mandatory Source Separation Law, effective Jan. 1, 2021. What that means is that the county will no longer provide this service, and the recycling fee will be removed completely from your 2021 Town and County taxes.

Continued recycling, once the new law is enacted, will now be worked out through your individual trash hauler, or by personal delivery of recycled materials to a transfer station or landfill. The legislature did note that the alternative efforts would most likely be accompanied with an additional fee.

“We are in communication with the trash haulers that work in Tioga County and we are working out the details,” said Tioga County’s Legislative Chair, Martha Sauerbrey.

She noted, however, along with the remaining Legislators, who all voted unanimously, that the decision did not come easy.

As part of this process, the Legislature held a public hearing on Sept. 23, 2020, and heard comments from the public and written comments in the days following. After much discussion, the Legislature chose to implement the new law based on financial concerns of increasing property taxes as well as recycling taxes.

Dennis Mullen, legislative representative for Waverly’s District, stated on Tuesday, “I can’t say to my constituents that we’re going to double the cost and provide less of a service.”

Legislator William Standinger echoed these words, adding, “In these economic times, the county is already taking a hit; I will vote yes to eliminate the law from 1992.”

Legislator Loretta Sullivan called the change in the law a “win” for area farmers.

As an example, a farmer owning acreage, but only putting out recyclables for a single household, is taxed based on their acreage and assessment, not the number of recycling bins.

“It’s not fair,” said Sullivan during discussions that preceded the vote, adding, I can’t support doubling the burden; especially for the ag folks, they will take a huge hit.”

Standinger added that the recycling is a problem nationally, noting, “Although we don’t agree, we don’t have a choice.”

With that, lawmakers repealed the law, adopted in 1992, with a unanimous vote across the board.

As for how it will work, if your garbage is collected curbside, the trash hauler you are currently doing business with will be required to pick up your recycling and transport it to a certified materials recovery facility, or MRF. Customers will likely be charged for this service.

Residents who normally take their garbage to a transfer station or landfill should continue to do so with a charge expected. If your municipality collects your garbage, they will provide recycling collection.

If the law was not repealed, and service continued as usual, county residents would have faced a 5.1 percent tax increase. And although many were willing to assume the additional costs, it would have affected the STAR Rebate, as they would have exceeded the allowable tax cap of 1.14 percent.

“We really don’t have a choice,” added Sauerbrey.