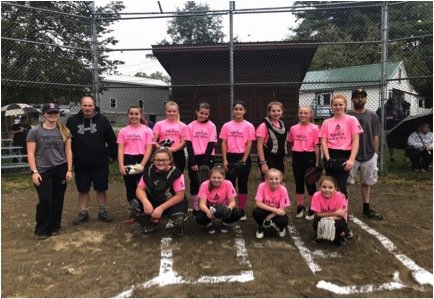 Tioga Youth Softball Organization finished its 2020 season with a 15-3 record. When COVID-19 hit, they didn’t think we would have a season. The other schools in the regular season league dropped out of the 2020 season due to the pandemic.

Tioga Youth Softball opened up the Tioga program to children from all Tioga County schools in the league, and has now become a half and half mix of Tioga and Waverly kids.

The teams that participated include Watkins Glen, Chenango Valley, Horseheads, Lady Lightning, and Binghamton Lady Lions 14U. They would also like to recognize the 2019 MVP’s – Lizzie Shaffer and Emily Bidwell.

The season was made possible by team and board sponsors: Taylor Garbage, Scott Smith & Son, and Cooley’s; along with board sponsors: Nichols Community Bank, Richard’s Funeral Home, Wagner Lumber, the Tioga County Sheriff’s Department, and Huckle’s Towing.

Thanks were extended to the Town of Tioga for allowing them to use the fields. The minors (10U) also played a few games with Watkins Glen this season.

In a press release from the organization, they wrote, “Thanks to coach AJ Sindoni, Chet Babcock, and Greg Nichols, as well as the parents, players, and coaches for a great season.”