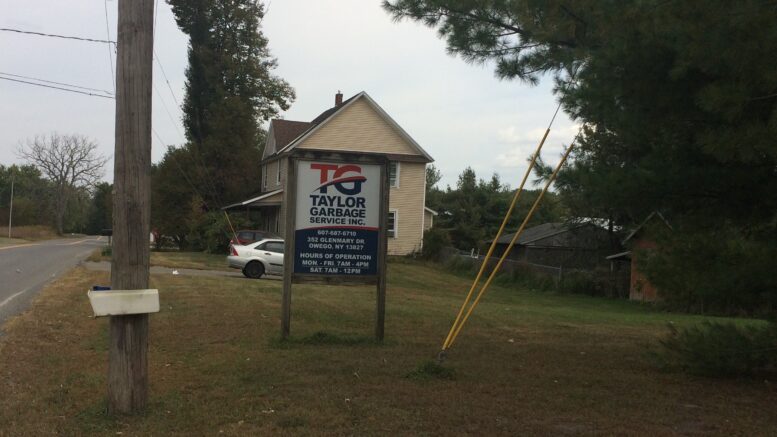 There are currently two locations for recycling, one at the Barton Transfer Station and the other at the Glenmary Drive Transfer Station, pictured. At this time they do not charge for those locations. Photo credit: Scott Armstrong.

On Wednesday, Sept. 23, the Tioga County Legislature held public hearings to introduce a change to the County’s Motel and Hotel tax, an action that was postponed to a later date, and to introduce changes to the county’s recycling law. The proposed law would require residents and trash haulers to assume responsibility of recycling, and would remove the Recycling Tax off of the County’s tax bill.

The well attended hearing, held in-person with limited capacity at the Tioga County Office Building and via zoom, offered residents a chance to voice their concerns.

According to Martha Sauerbrey, legislative chair, the county’s current contract for recycling with Taylor Garbage will conclude at the end of the year, and bids were sought for renewal. However, according to Sauerbrey, the bids came in at double the cost of the current fee.

“The increased costs would be passed on to the taxpayer,” said Sauerbrey.

According to Ellen Pratt, the county’s sustainability manager, the lowest bid came in at $2.48 million per year, a $1.26 million increase.

This increase, according to county officials, is primarily due to the plummeting of recycling commodity prices, an increase in wages, and an increase in equipment and materials.

The new law, as proposed, would require individual garbage haulers operating in Tioga County to collect the recycling along with regular garbage, and most likely at an additional fee. If approved, the recycling fee found on a residents’ tax bill would be removed. Residents will also have an option to sort and then deliver their recyclables to a transfer station.

Currently there are two transfer stations, one in Barton, and one on Glenmary Drive. Neither have a fee at this time for recyclables.

And even though there are alternate options for recycling, residents are concerned about the contract’s cancellation.

Esther Woods, a garbage hauler from Nichols, N.Y., addressed lawmakers during the public hearing. Woods stated that she is unsure of how much they would have to charge their customers for the recycling component, and is also concerned that residents will start putting their recyclables in the trash.

One Apalachin resident also addressed the legislature, presenting a petition signed by 625 area residents that want the curbside recycling kept in place. She noted that of the services offered, recycling is one that residents would be willing to pay for.

“Some will burn it, some will deposit their recyclables along highways, and some will just mix it with their trash,” said Barton, adding, “Sometimes it costs money to do the right thing.”

Kevin Millar, Owego resident and past Mayor, reminded the legislature that the cost went up at the landfill; therefore, he noted, people will see an increase to their individual garbage bill. He also noted that there are too many unknowns.

“The cost of recycling to the county is known; individual charges by haulers are unknown,” he added.

Others that addressed the legislature spoke of the educational and environmental component. In Spencer, students are being taught about composting, recycling, and more.

Most see this as a step back in responsible recycling, and feel that many residents will discontinue recycling entirely, and that these items will end up in the landfill or on the side of the road.

Sister Mary O’Brien, from Tioga County Rural Ministry, also addressed the legislature, suggesting they give this decision some more time.

“We need more time for such a big business venture,” said Sister Mary.

The problem, however, and according to officials, is the property tax cap, as well as the added expense to taxpayers.

In a release sent out following the hearing, officials wrote, “What we have heard from the community is they are willing to pay more to keep the same program. However, it is not that simple.”

They further explained, “New York State municipalities have a 2% property tax cap. Based on the 2020 budget numbers, the new recycling cost calculated in our property tax equates to a 5.1% increase in property tax. That means when property owners receive their town and county tax bill in January, the line item for recycling will more than double and there will be an increase of 5.1% for your regular property tax.”

The County is currently experiencing a 20% cut in funding from the State, and is experiencing a 9% reduction in sales tax, to date. In addition, revenues from Tioga Downs are non-existent at this time.

“Because of all of this, we know that we will need to draw from our fund balance to cover budget costs for three to five years to recover from the COVID-19 experience,” county officials stated, adding, “The bottom line is that this is a decision based on providing service and spending tax dollars wisely.”

Only three of 62 counties in New York State have countywide curbside recycling funded through their county, according to officials, and most require that private haulers and municipalities that provide garbage pickup also collect recycling.

The current plan for Tioga County is as follows; if your garbage is collected at your curb, the hauler you choose will be providing recycling, likely with a surcharge.

Residents that bring their garbage to a transfer station or landfill should bring their recycling with them and place it in the appropriate location. There may be a charge. If your municipality collects your garbage, they will provide recycling collection.

Mayor Jim Tornatore from Newark Valley, who addressed the legislature on Wednesday, stated that they offer municipal trash collection and will continue to do so. He noted that they would add recycling as well, if the changes were approved.

If the Legislature goes through with the plan, the recycling tax line will be removed from your property tax bill completely.

“No one really likes change, and we certainly would like to keep the weekly curbside recycling program; however, the overall costs of maintaining the program outweigh the convenience of the program,” officials stated in the release.

Written comments will be accepted until Oct. 1, 2020 at recyclingcomments@co.tioga.ny.us.