The VFW Post 1371 proceeds to the grounds of the Memorial Service in Owego. (Photo by Wendy Post)

On Sept. 11, the Town of Owego was host to a ceremony at the 9/11 memorial, located at Hickories Park in Owego. The event commemorated the attacks of 9/11, and honored and remembered those who lost their lives on that day. 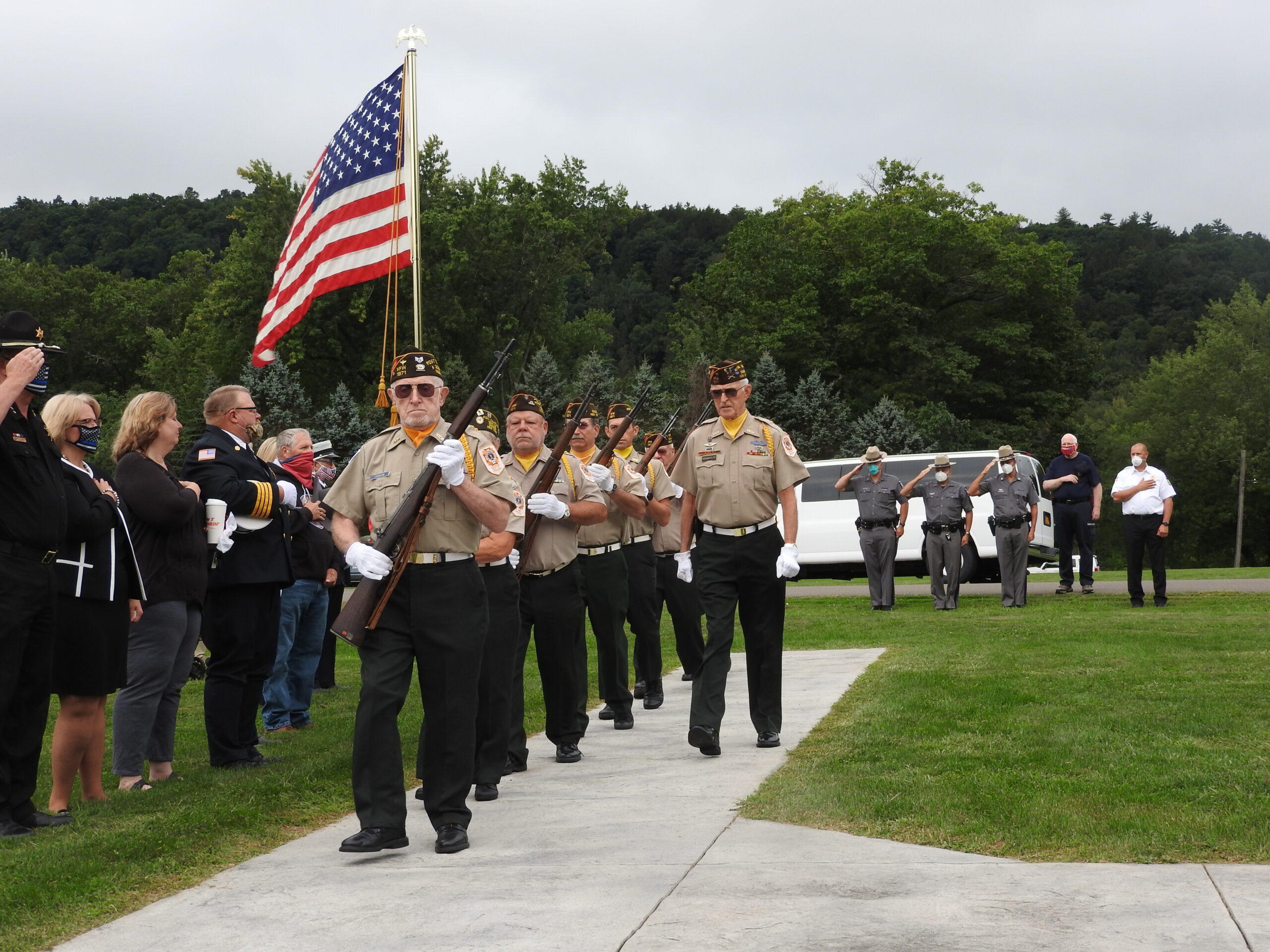 The VFW Post 1371 proceeds to the grounds of the Memorial Service in Owego. (Photo by Wendy Post)

On September 11, 2001, 19 militants associated with the Islamic extremist group al Qaeda hijacked four airplanes and carried out suicide attacks against targets in the United States. Two of the planes were flown into the twin towers of the World Trade Center in New York City, a third plane hit the Pentagon just outside Washington, D.C., and the fourth plane crashed in a field in Shanksville.

Nearly 3,000 people were killed during the attacks, which triggered major U.S. initiatives to combat terrorism. 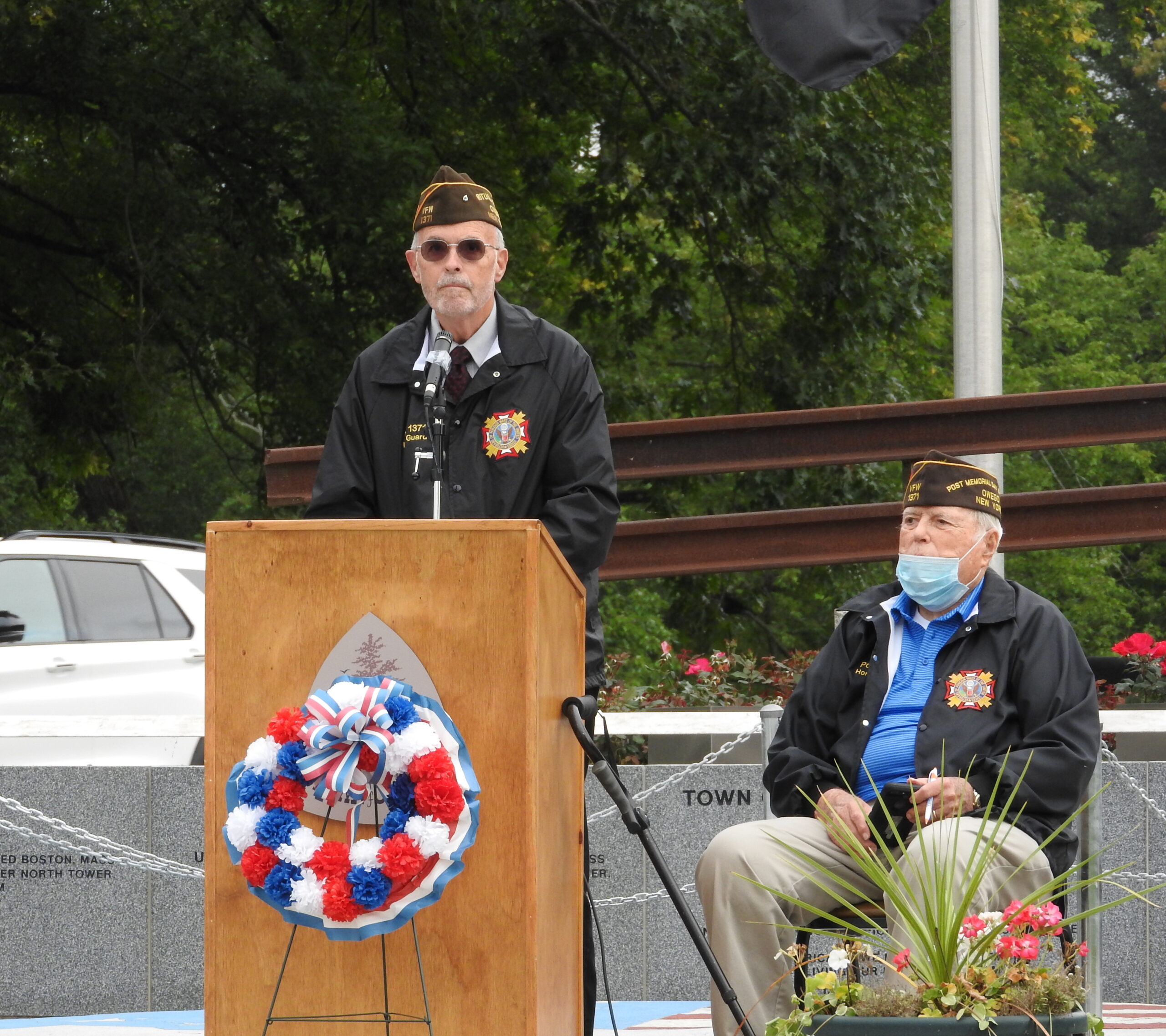 Among those at the World Trade Center on that fateful day was former Town of Owego resident Derek James Statkevicus. Derek grew up in Apalachin, and graduated from Vestal High in 1989. He was also a scout, earning the rank of Eagle Scout with Troop 43. He also attended St. Peter and St. Paul Eastern Orthodox Church in Endicott.

Derek was on the 86th floor of the World Trade Center’s South Tower on 9/11; he died that day at the age of 30, leaving behind his wife Kimberly and their one-year-old son Tyler, and a second child, Derek, who was born on Jan. 2, 2002, four months after the attacks.

A granite bench now honors Derek and is an integral part of the 9/11 Memorial in Hickories Park. Last Friday, Dean Morgan spoke about Derek, and then placed a wreath in front of the bench in his honor. 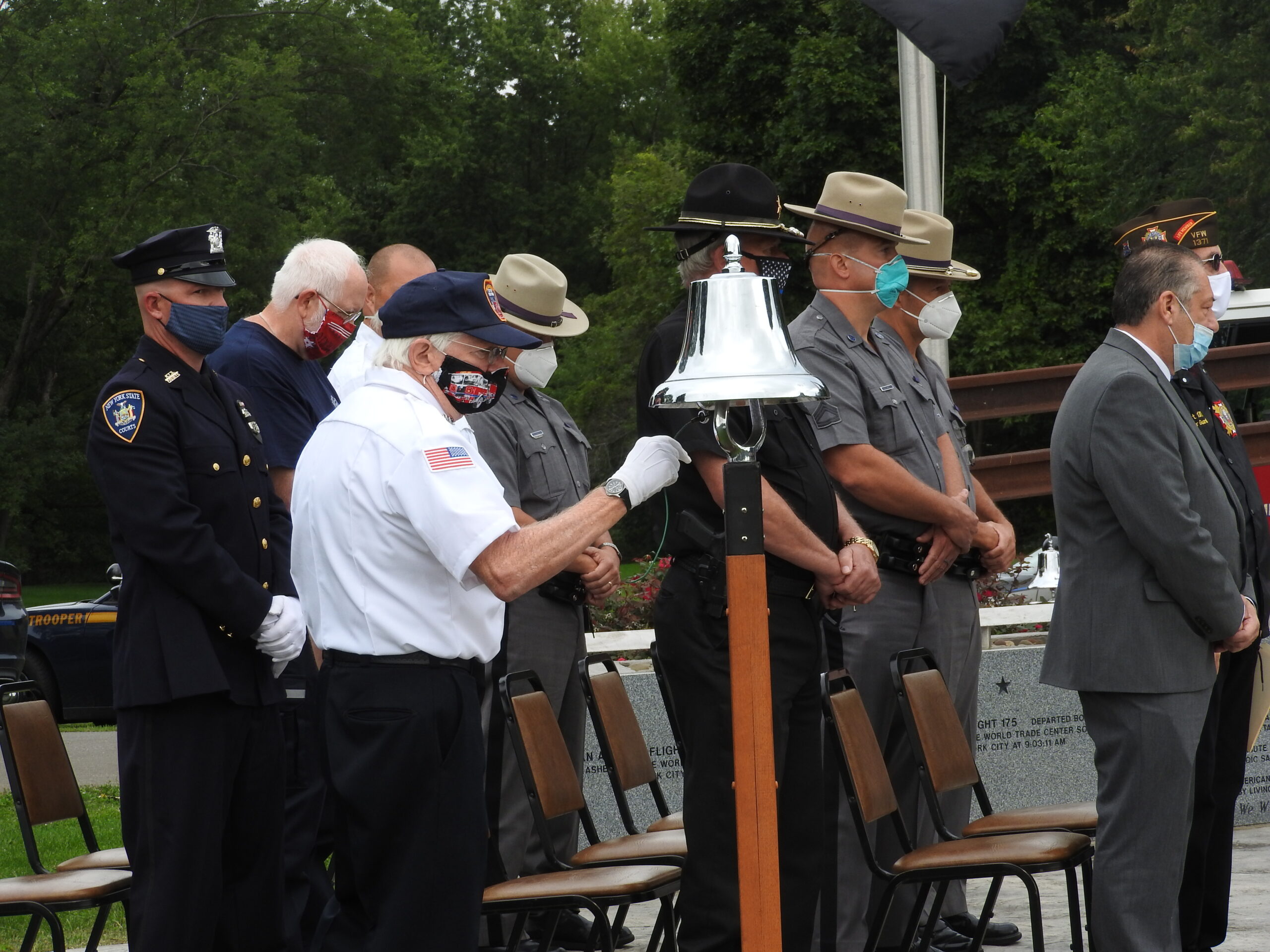 John Hitchings, first responder, tolls the bell during a ceremony held last Friday at the 9/11 Memorial in Owego. During the ceremony, the bell tolled at the exact time that each plane crashed, and on American soil. (Photo by Wendy Post)

With Jim Raftis, Sr. serving as emcee, and John Hitchings standing by to toll the bell, the ceremony also welcomed several dignitaries, area first responders, and a member of the Edward P. Maloney Memorial Bagpipe Band.

Among the dignitaries that addressed the gathering, they all echoed the same sentiment – that our first responders are all heroes. They also talked about American spirit. 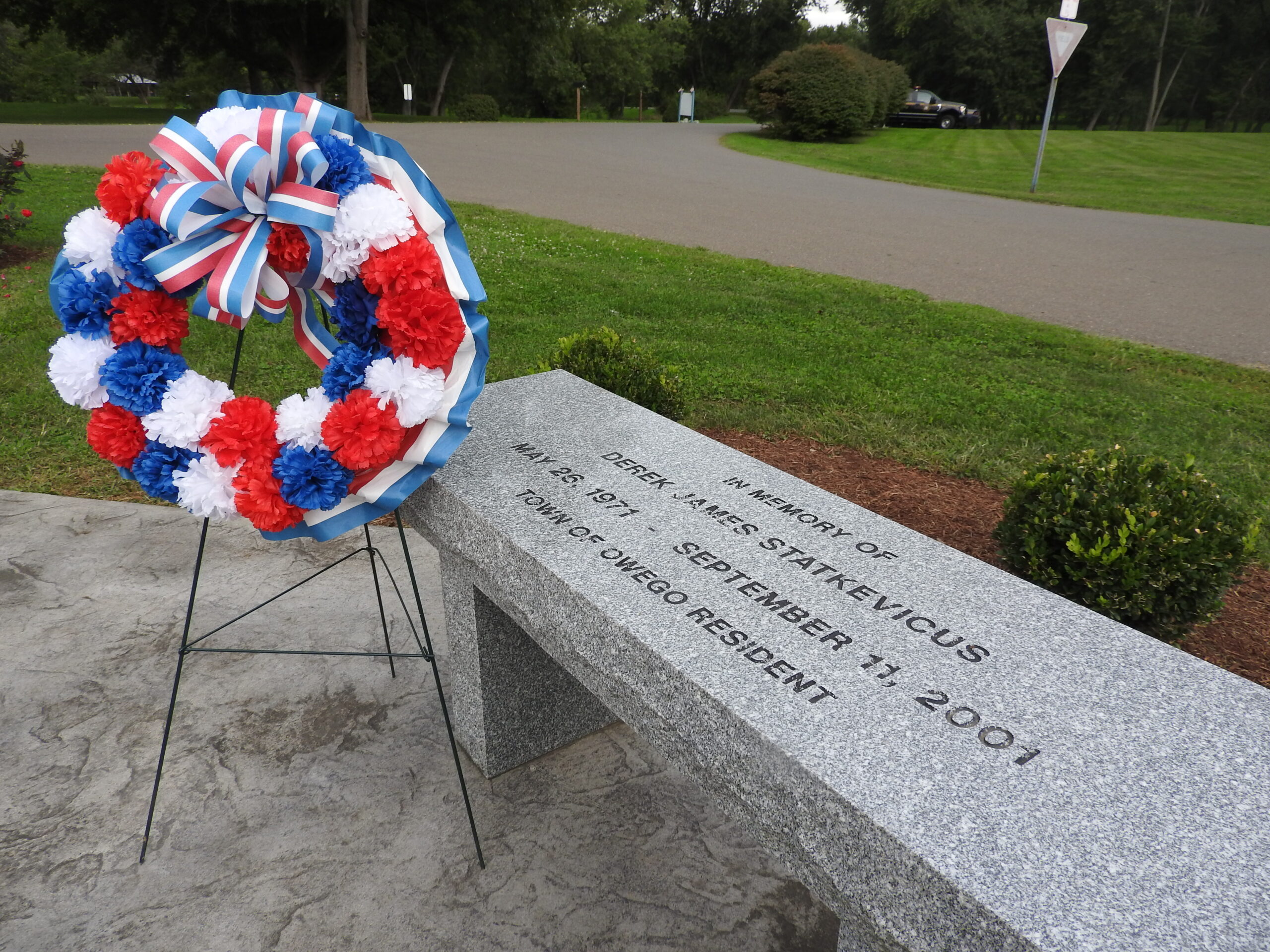 A wreath rests near the granite bench at the 9/11 Memorial in Owego that honors Derek Statkevicus, who died in the World Trade Center on 9/11. (Photo by Wendy Post)

Assemblyman Christopher Friend, who attended the ceremony, stated, “Americans always come together when faced with chaos and tragedy. Responders are heroes and represent what America is all about.”

“The American spirit cannot be broken,” he added.

Congressman Tom Reed spoke as well, emphasizing that people need to be educated about 9/11. 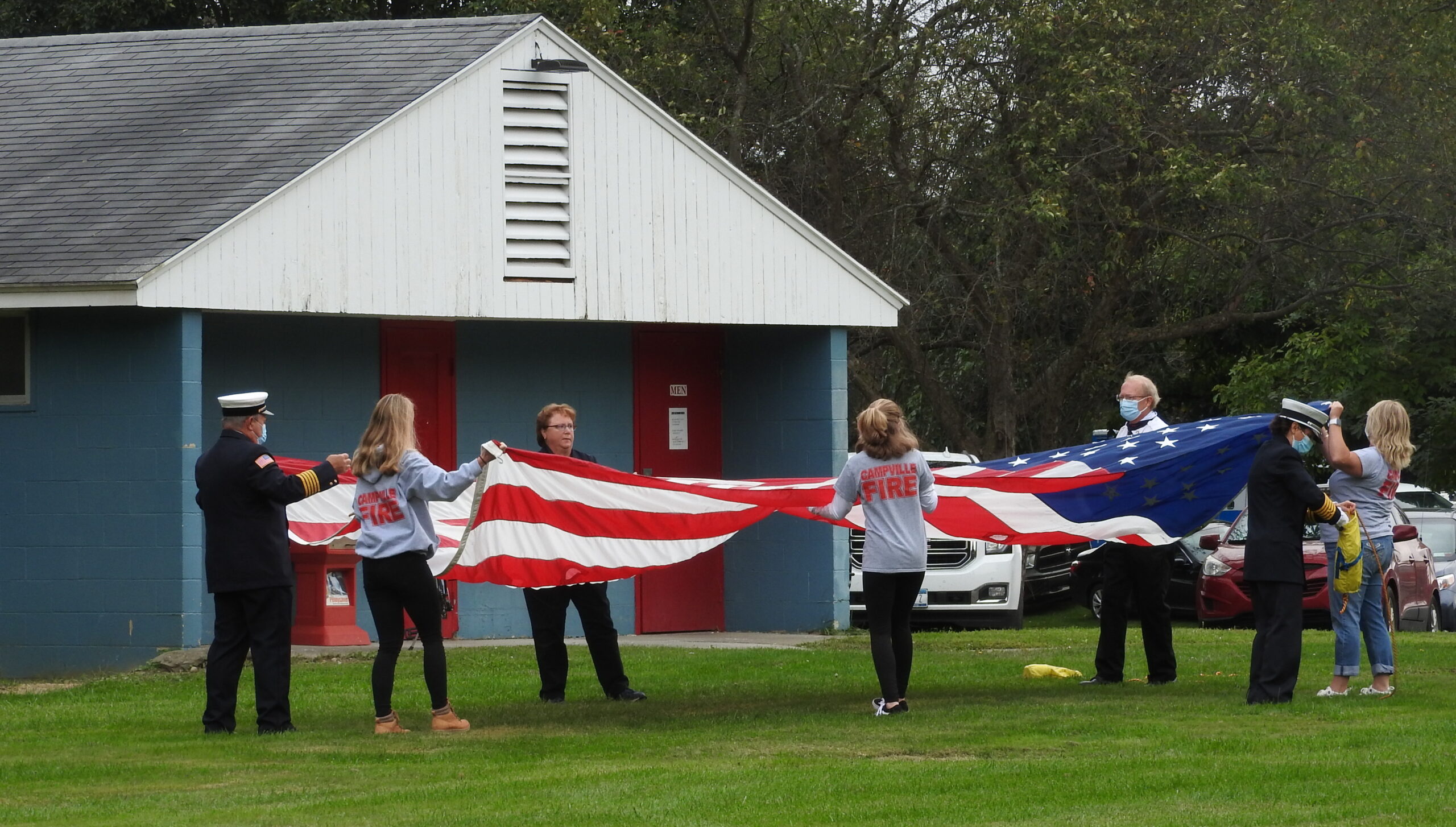 First responders fold the flag at the end of last Friday’s 9/11 ceremony held at Hickories Park in Owego. (Photo by Wendy Post)

“We must pass the lesson of what happened on to the younger generation,” said Reed, adding, “We must not forget.”

Following the ceremony, a ‘Back the Blue’ ride departed from the park and traveled through town in an effort to rally around our first responders, to include law enforcement.

From left, Jerry Pierce and Police Officer Rick McCulskey lead guests on a brief ride through town in an effort to rally support for first responders and law enforcement. (Photo by Wendy Post)

“We stand with our police every day, and the men and women that serve us,” Congressman Reed added.

And in the words of Ken Easton, a former Fire Chief that served in Owego during 9/11, and spearheaded the collection of a scholarship fund honoring a department’s member in New York City, “We have not forgotten.” 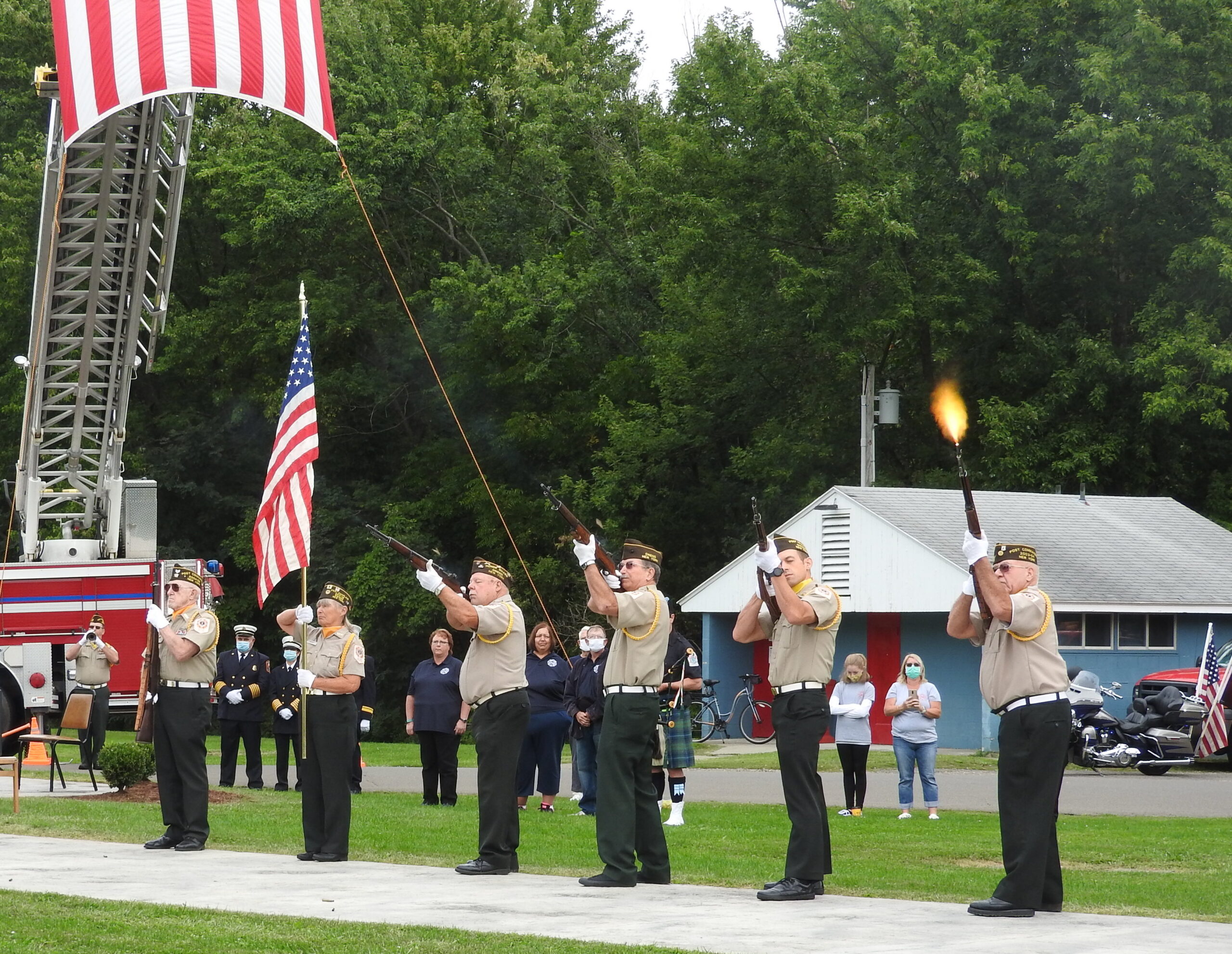 A rifle salute is rendered as Taps is played near the conclusion of the 9/11 ceremony held last Friday in Owego. (Photo by Wendy Post)

Be the first to comment on "‘We have not forgotten’"