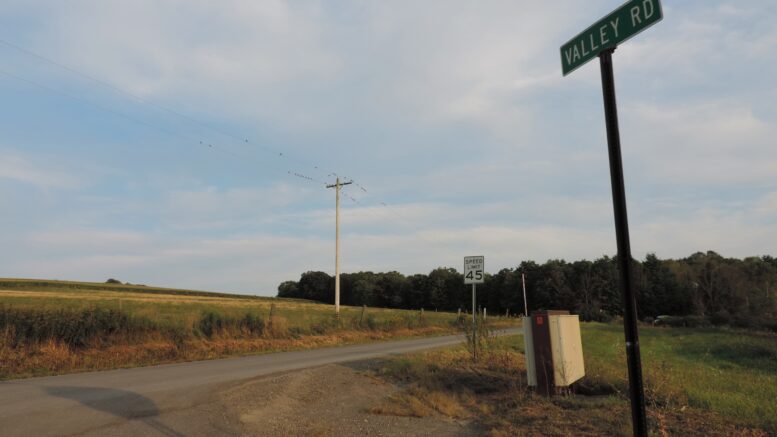 Pictured is the intersection of Valley Road and Montrose Avenue in Owego. Several residents of the Valley Road area have been dealing with a problematic upset to Internet and cell phone service for an extended period of time. (Photo by JoAnn R. Walter)

Staying connected hasn’t been so simple for some residents of Owego. The increased need for reliable Internet and cell phone service for those working from home or participating in remote learning is a hot topic.

Several residents of the Valley Road and surrounding area have been dealing with an upset to Internet and cell phone service for an extended period of time.  Many utilize a separate landline.

From AT&T to HughesNet, Plexicomm, Verizon, Spectrum and more, residents have tried many carriers, and even started a neighborhood group where they share information and personal experiences about the subject.

Kelly Crapser, a Valley Road resident for over 13 years, is concerned about remote learning for her ninth grader at Owego Free Academy, which takes place three days a week; and another who has started college, and all remote learning.

“My oldest is concerned about losing a connection to a Zoom class,” Crapser said. Alternate plans are to connect at a friend’s home.

Lorna Tiefenthaler, who has lived on Valley Road for 26 years, has found it challenging to work from home and has modified her schedule so that some days she is online prior to 6 a.m. when there is less traffic. However, that isn’t always successful.

Valley Road resident Sharon Frampton remarked, “I had great service for a solid year [and then switched service].” She noted that since March that service has declined significantly.

Frampton and other neighbors have contacted the FCC related to their individual concerns.

According to Frampton, “We were told that we are in a ‘hard to service’ area and that increased traffic due to COVID is a factor, too,” adding that, “They concluded that no changes were necessary and that the next upgrades were scheduled in 2022.”

Frampton added, “It’s not my mission to put down the carriers, we just want to resolve the issues.”

According to some residents, including Frampton, they felt as though the carriers were suggesting they look elsewhere.

Darren Dodge, who has lived in the area his entire life, commented that Valley Road seems to be, “The road that time forgot.”

The Dodge family enjoys where they live and have actually lived without solid Internet access for years. Now that utilizing the Internet has become more of a necessity in these times, they are searching for the right answers.

Dodge has five children who attend Owego-Apalachin (OA) Schools. He explained, in one instance, a carrier could not get a signal due to an obstructed line of sight. OA Schools provided the family with an iPad in August that includes an AT&T hotspot.

Dodge said, “It has worked a little better,” however questions if the hotspots could pose a strain on the system.

Dodge complimented the district’s efforts, “OA Schools has been fantastic, and the teachers work with us because they understand our Internet situation.”

Dodge also has a Plan B, which means loading up five children and driving elsewhere to access a reliable internet signal, although he hopes it is not often or during the winter.

Valley Road resident, Rhonda Baker, with one child in OA Schools, explained that should Internet issues persist, alternate plans are to go to the homes of friends. Baker hopes that teachers will understand if an Internet hiccup occurs during a required on-line class, and remains concerned about spotty cell service, and especially in case of emergency.

Valley Road residents have also voiced their concerns to elected officials.  Another option for residents, a survey and analysis conducted by Spectrum was completed last week.

McEvoy explained that numerous surveys were conducted with students and families in order to understand and help those with no Internet, or unreliable Internet.

OA Schools has worked with Plexicomm to create Wi-Fi access at several locations within the district, and also expanded outdoor access points. Students and families should reach out to the district for information

McEvoy continued, “Every student, K-12, has a school issued iPad. We issued five AT&T hotspot devices and 20 Verizon wireless data enabled iPads in the spring. Heading into this school year we have issued, or are in the process of issuing 15 AT&T hotspot devices to assist students and families who have contacted the district,” and added, “We are waiting on devices to be delivered.  They (families) should be receiving information on their devices soon.”

A Technology Family Help Desk has been launched that allows students and families to fill out a Google form with any iPad, App, or technology issue they have with their school-issued devices and classroom assignments. OA Schools encourages families to complete a ticket on the Help Desk, which is monitored by the OA IT Department, or call the main office at their child’s school to request a ticket be submitted on their behalf.

You can find information on the OA App or at www.oacsd.org/CurriculumInstruction.aspx.

Be the first to comment on "Staying connected to virtual learning"