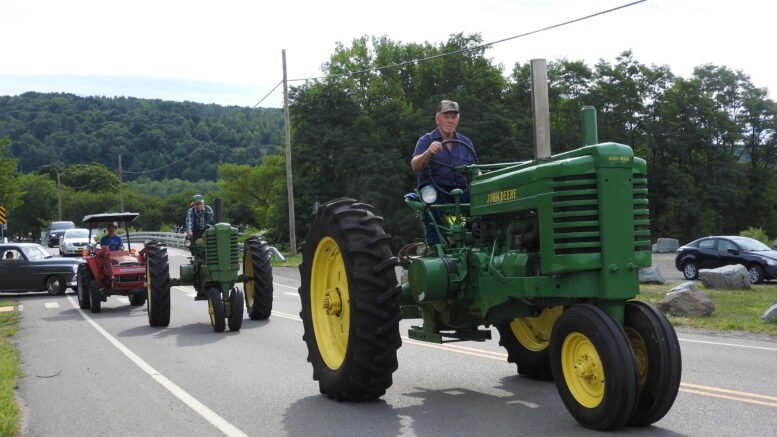 Pictured is Lewis Campbell of Sayre, Pa. on his 1947 John Deere. Behind him is 89-year-old John Berry of Nichols. (Photo by Wendy Post)

Earlier this year, the Roki Club out of Nichols announced the cancellation of events surrounding their annual Labor Day event that takes place around town, and with its main events normally taking place at Kirby Park. But when Tim Taylor, a native to Nichols, N.Y. who currently resides in Waverly, N.Y. thought about it last week, he felt they needed to do something. 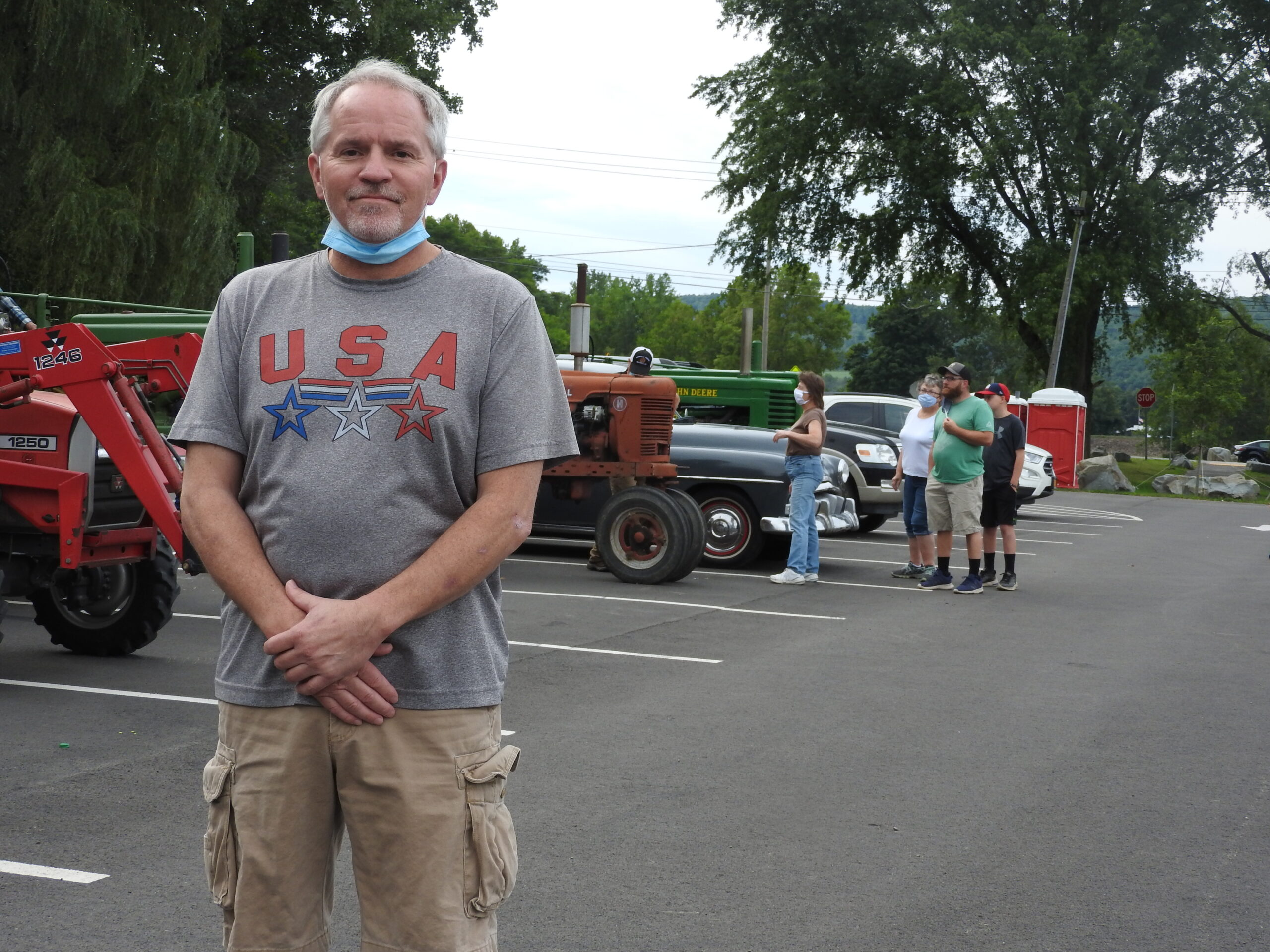 Pictured, Tim Taylor, formerly of Nichols and now residing in Waverly, N.Y., put together the annual Old Home Day parade in a very short period of time. Behind him, tractors and old cars line up at Kirby Park for the parade. (Photo by Wendy Post)

“I wanted to keep the tradition alive,” said Taylor as he stood at Kirby Park while tractors and a couple of old cars, and even a motorcycle, pulled in to form the annual parade. This year also would have been the 109th year for the celebration, dubbed Nichols Old Home Days.

According to Taylor, Old Home Day honors the tradition of small town America and brings together the close-knit families.

“A lot of my friends and relatives come every year,” Taylor added. 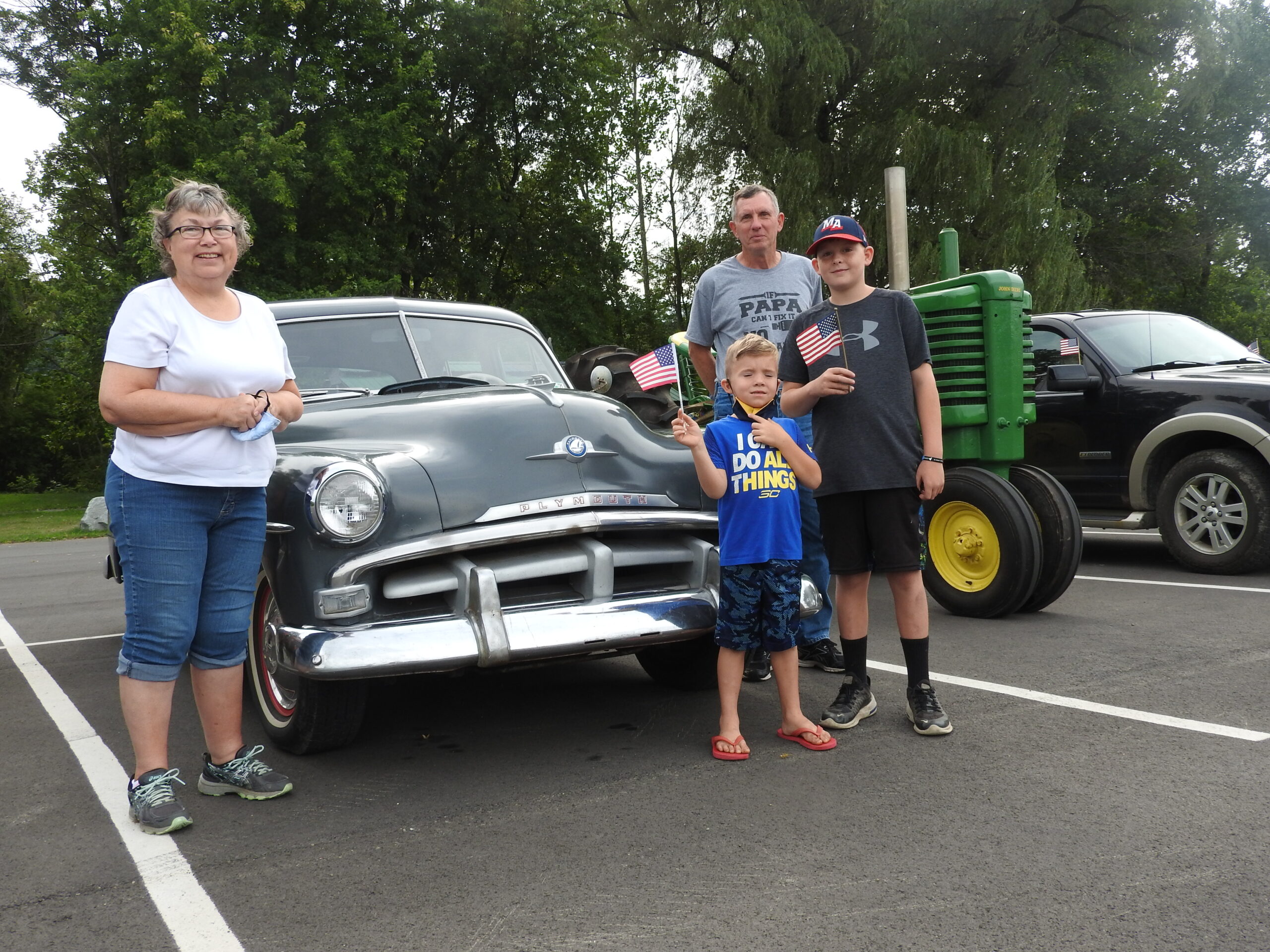 Pictured are Dave and Karen Kunte of Rome, Pa., along with Owen and Charlie Parker, with their 1952 Plymouth Cranbrook. The crew arrived to participate in an impromptu parade, organized by Tim Taylor and forming at Kirby Park in Nichols, N.Y. on Labor Day. (Photo by Wendy Post)

Dave and Karen Kunte, of Rome, Pa., arrived in their 1952 Plymouth Cranbrook along with Owen and Charlie Parker. The couple shared they were very excited to learn that the parade was on.

Eighty-nine-year old John Berry, of Nichols, N.Y., arrived on his tractor to participate in the parade.

“A friend told me about it,” said Berry, noting that he has lived in Nichols his entire life, and has attended the Old Home Day event for many years. 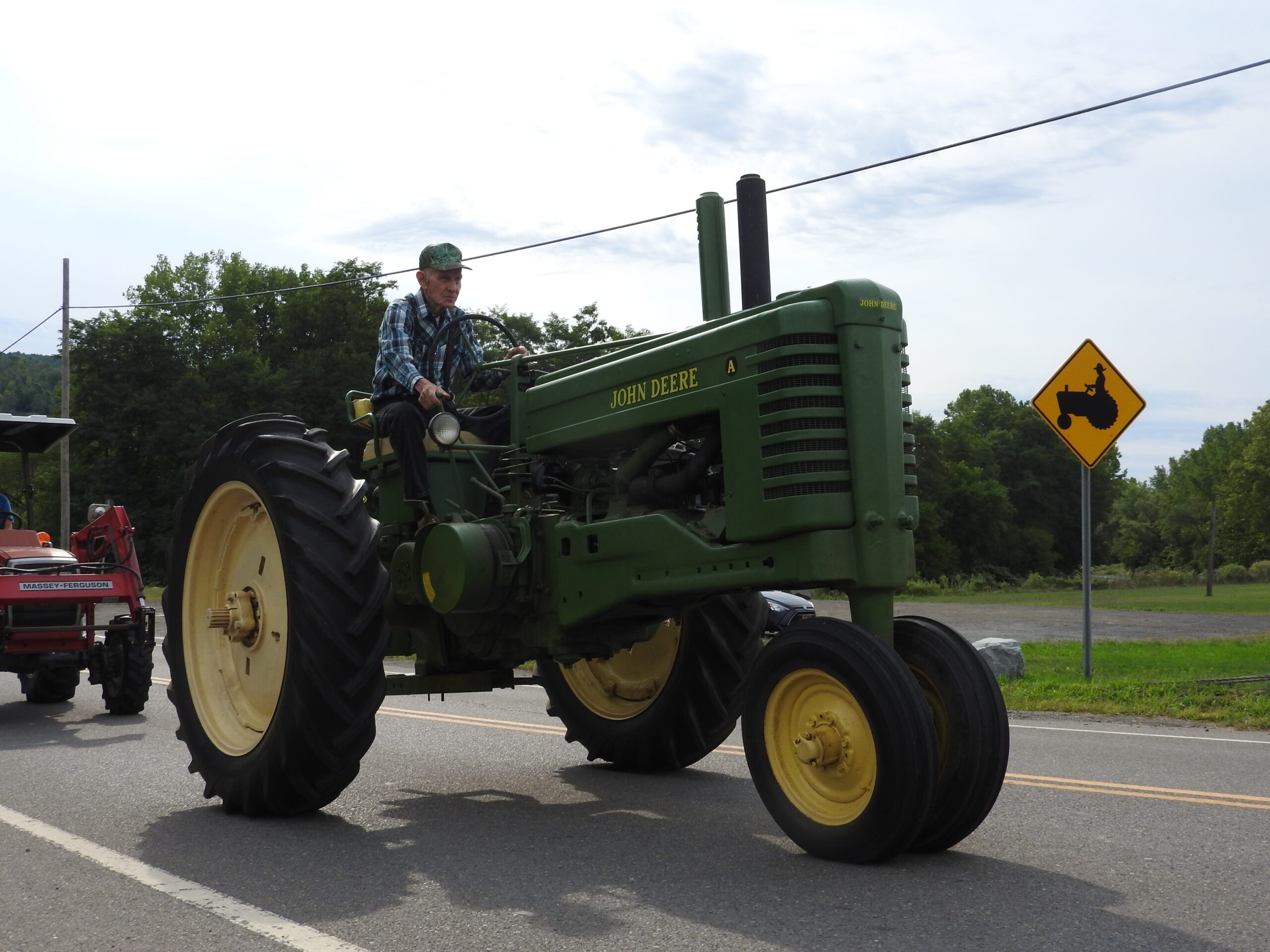 Pictured, 89-year-old John Berry of Nichols participates in another Old Home Day parade. Berry has resided in Nichols, N.Y. for his entire life, and didn’t want to miss the parade. (Photo by Wendy Post)

Others from Litchfield, and Sayre, arrived on tractors dating back to the 1940s. A motorcycle arrived with an extra rider to partake as well. 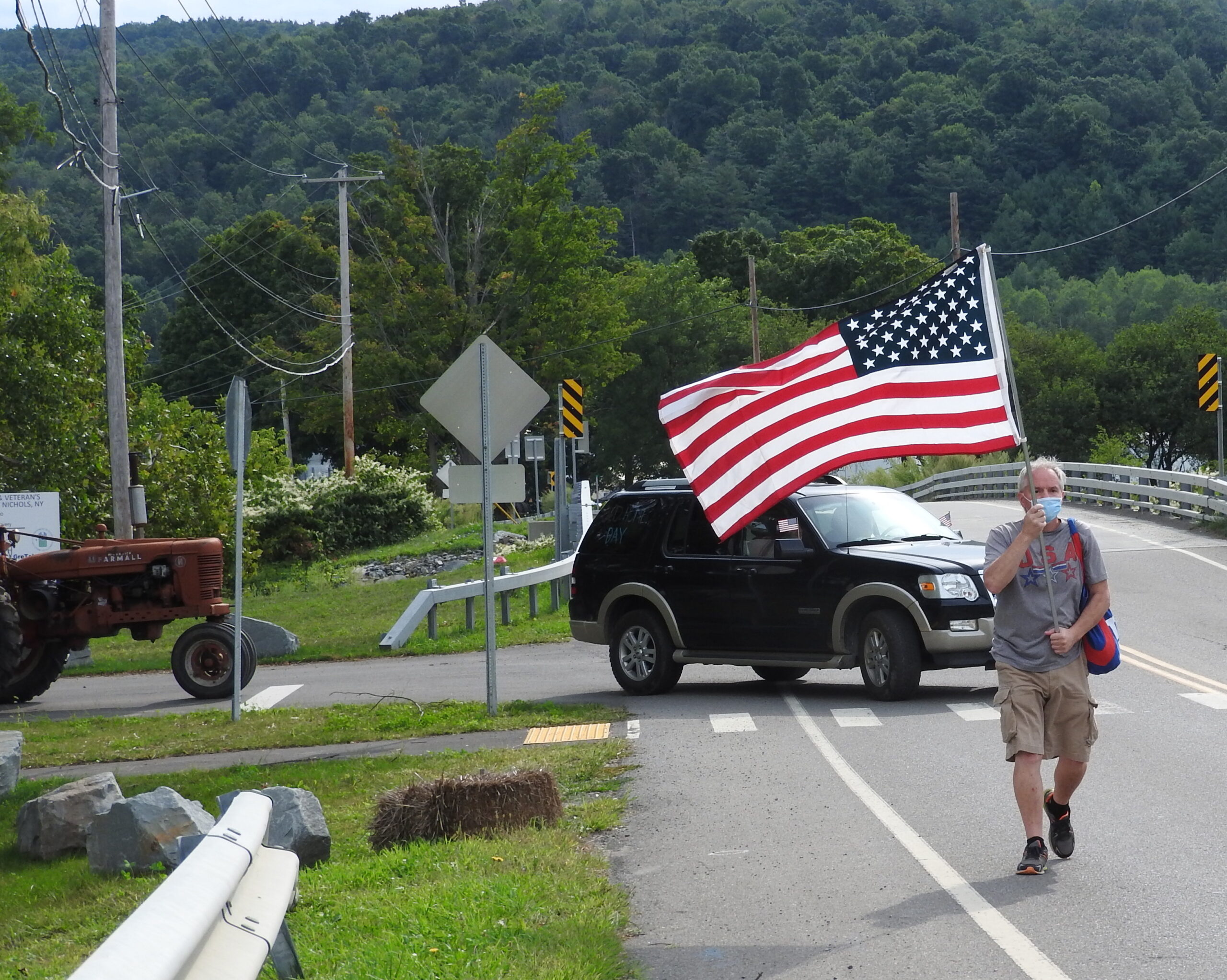 Tim Taylor holds the American Flag as he leads the Labor Day parade’s departure from Kirby Park in Nichols, N.Y. The stream of tractors, cars, and even a motorcycle circled around town before returning to Kirby Park. (Photo by Wendy Post)

“I proudly carried the American flag in the parade as a Boy Scout in 1972, and despite Hurricane Agnes,” said Tim Taylor.

“I will carry Old Glory once again as I lead whoever wants to participate in the parade through our tiny, but very proud community,” Taylor said in an email sent out, just days before the Labor Day parade.

The parade circled around town before returning back to Kirby Park. 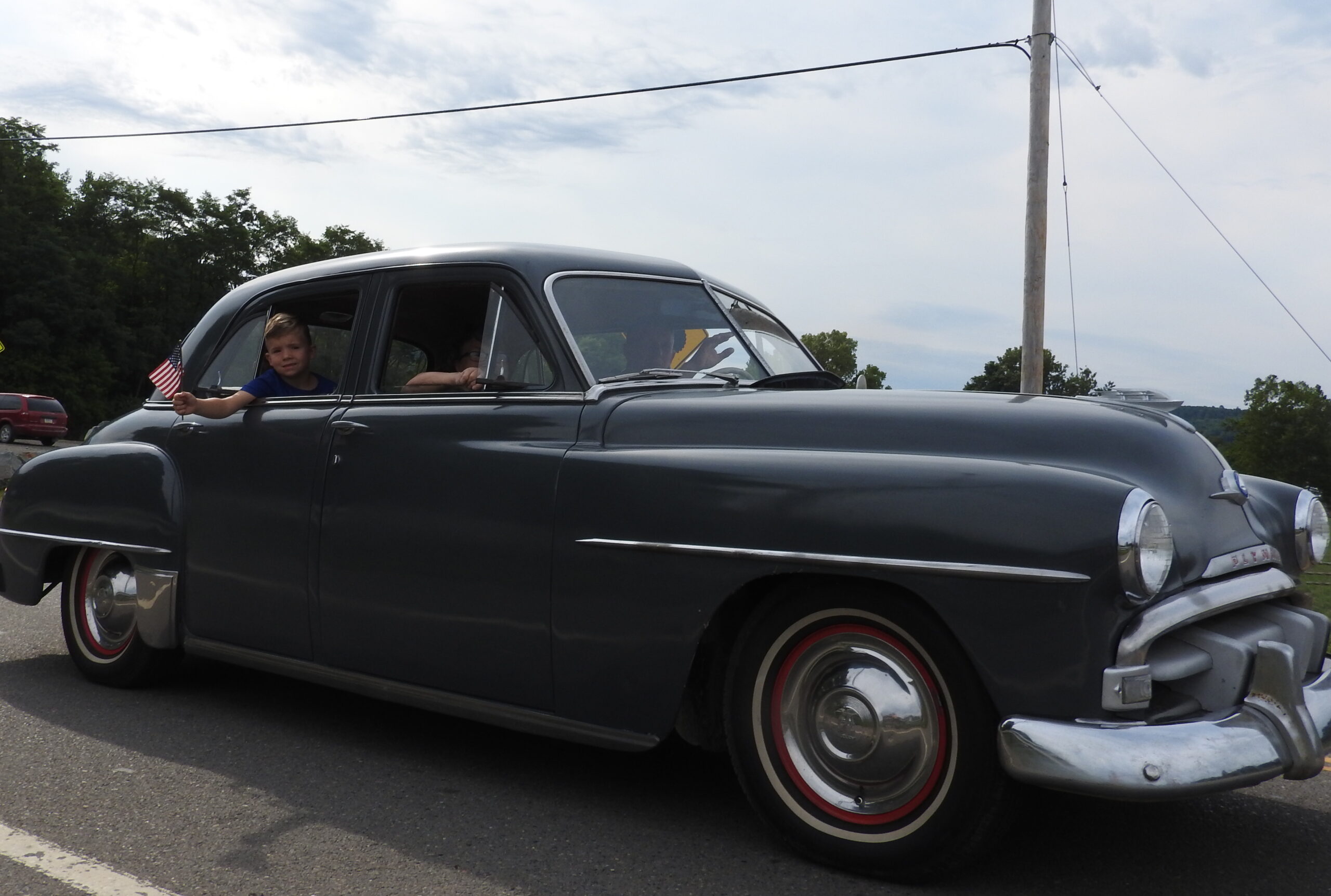 Dave and Karen Kunte, of Rome, Pa., participated in the Old Home Day Parade in their 1952 Plymouth Cranbrook, along with Owen and Charlie Parker. (Photo by Wendy Post)

Taylor made the decision to move forward only days ago, and was having a hard time spreading the word. But despite the lack of time involved, close to a dozen arrived to participate in the parade, and yard sales were popping up around town for the daylong event.

Down the road, the fire department was hosting their annual Chicken BBQ, with proceeds benefiting the department. The event was socially distanced, and many guests were seen wearing face coverings – even those in the parade.

“This longstanding tradition needed to keep going,” added Taylor as he looked at his watch and readied the parade for a 10 a.m. step off.

Be the first to comment on "Hankering for a summertime parade"