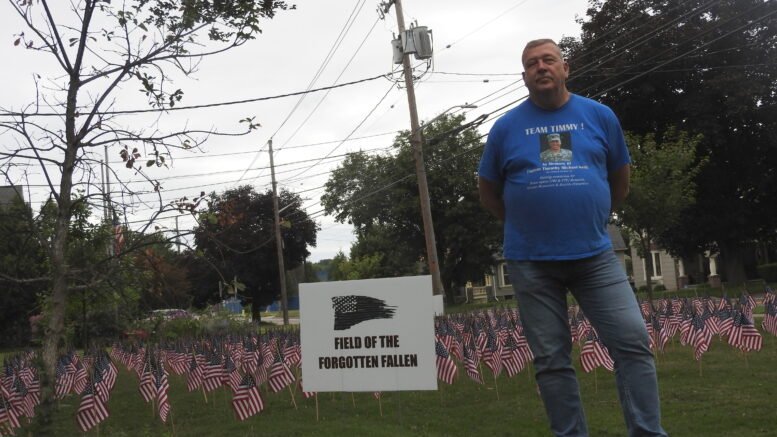 Pictured, Rick Neild, Captain Timothy Neild’s father, stands by the “Field of the Forgotten Fallen” display that will be set up on the grounds at 56 Main St. in Owego through the month of September. (Photo by Wendy Post)

Last Tuesday, the Tioga County Veterans’ Service Agency and Tioga County kicked off September’s recognition as “Suicide Prevention Month,” especially among soldiers. The “Field of Forgotten Fallen” is set up to recognize those who die each day of veteran suicide, and is on display at the County Office Building, located at 56 Main St. in Owego through September.

During the presentation to kick off the month long observance, Michael Middaugh, who serves as the director of the Tioga County Veterans’ Service Agency, stated, “One veteran suicide is one too many.”

This month’s display also recognizes Captain Timothy Neild of Candor, who committed suicide three years ago; Sept. 12 would have been his 40th birthday. 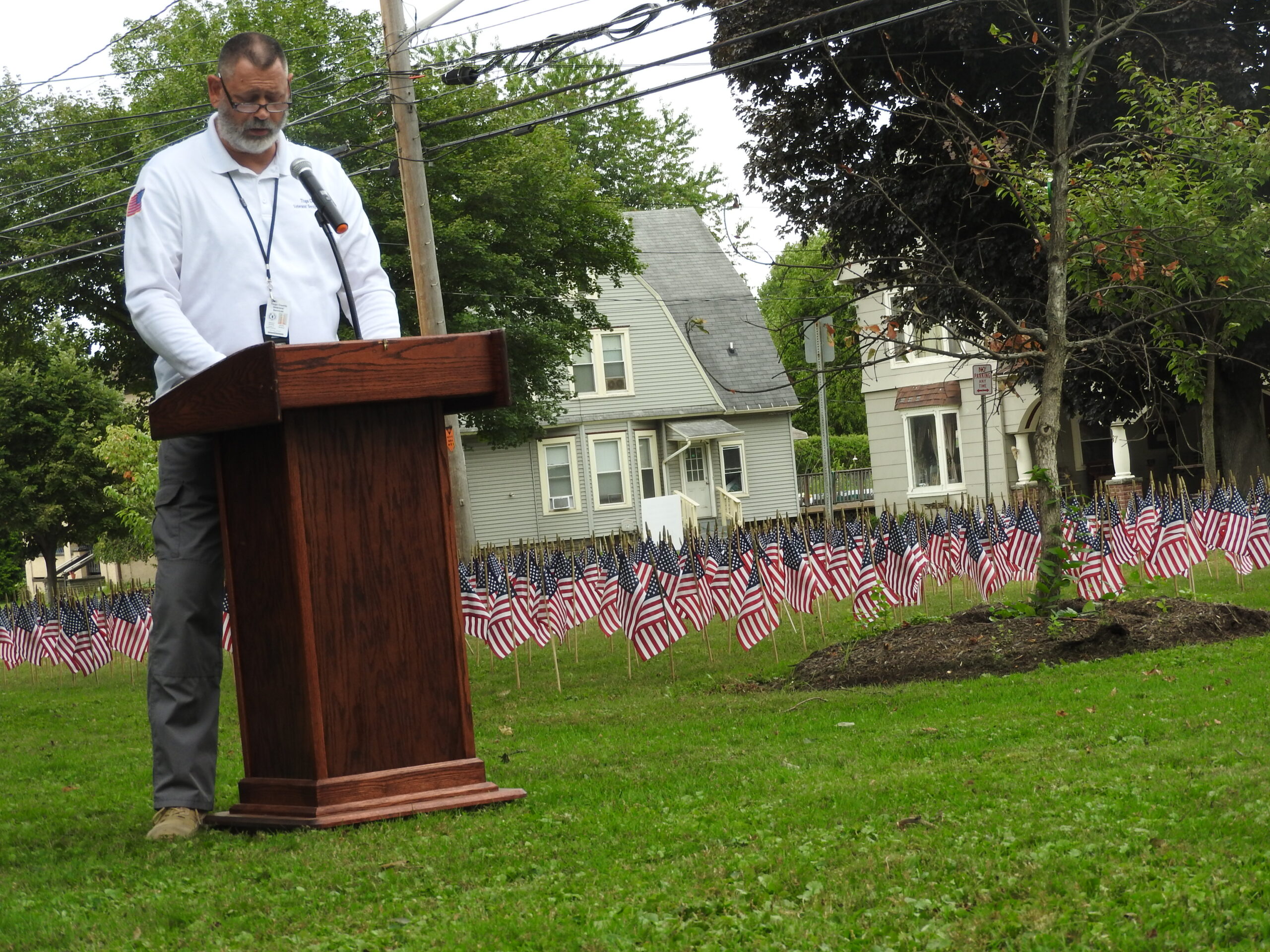 “Since this is our third year of putting up the flags, we thought it would be an appropriate recognition,” said Middaugh.

After he had graduated from high school, Neild suffered a brain injury from an accident. About six months later he was deployed and served in Afghanistan for a year. He was wounded, suffered Post Traumatic Stress Disorder and had an injury to his back.

Upon returning home and going back to work, Neild was in a motor vehicle accident that left burns on parts of his body and caused further injury to his brain. Neild would spend some time in a coma, recovering at Walter Reed Hospital for an extensive period of time.

After facing so many of life’s challenges, Neild died in October 2017. On Tuesday, family members were on hand at the opening of the “Field of the Forgotten Fallen” to express their gratitude, and to honor their fallen hero.

Tioga County Legislator William Standinger spoke briefly. Neild was Standinger’s nephew, and he spoke of the help that the family received, especially through A Soldier’s Wish, an organization that supports family members of the fallen.

“They really stepped in to help Tim’s kids,” said Standinger of the organization.

“This is my boy,” said Rick as he held back the tears. 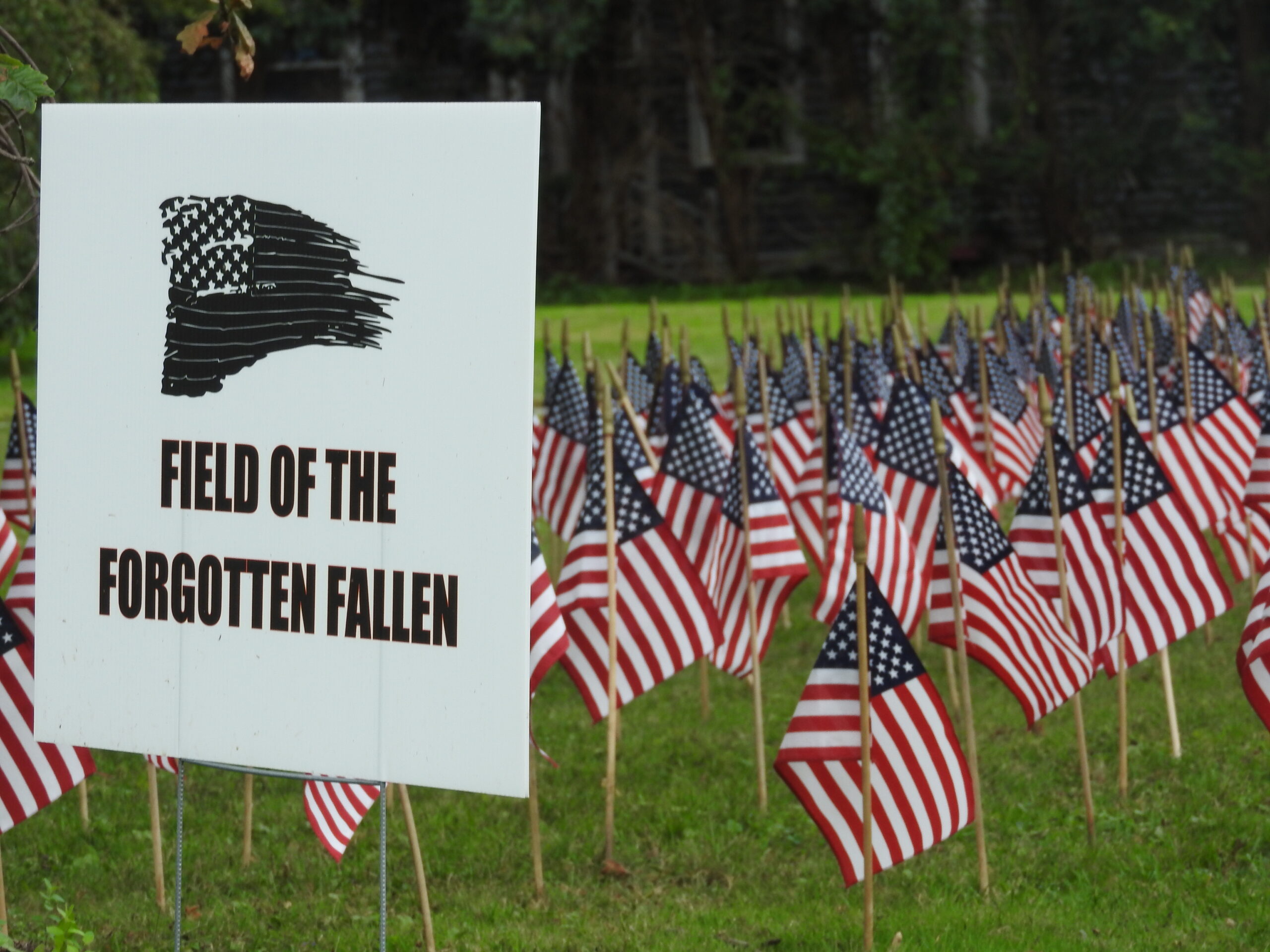 Pictured is the “Field of the Forgotten Fallen,” which will remain on display through September. (Photo by Wendy Post)

Rick also spoke of “Team Timmy”, a group of residents that organized to keep Tim’s memory alive and to continue raising awareness of veteran suicide. The group, according to Rick, is also planning a fundraiser that will benefit a scholarship in his son’s name.

The motorcycle event will take place on Sept. 12, and will depart from the American Legion in Candor for a 70-mile ride to Syracuse. Registration is from 8 to 9:15 a.m., and is a $15 donation.

“Twenty-two veterans die every day from suicide,” said Rick, who noted he has a STOP 22 plate on his motorcycle.

“He rides with me,” Rick added.

He concluded Tuesday’s opening of the field, asking, “Are you ready? Are you ready to listen to a veteran talk?”

If you want to learn more about STOP22, or for more information on veteran services, you can contact the Tioga County Veterans’ Service Agency by calling (607) 687-8239 or 8228.