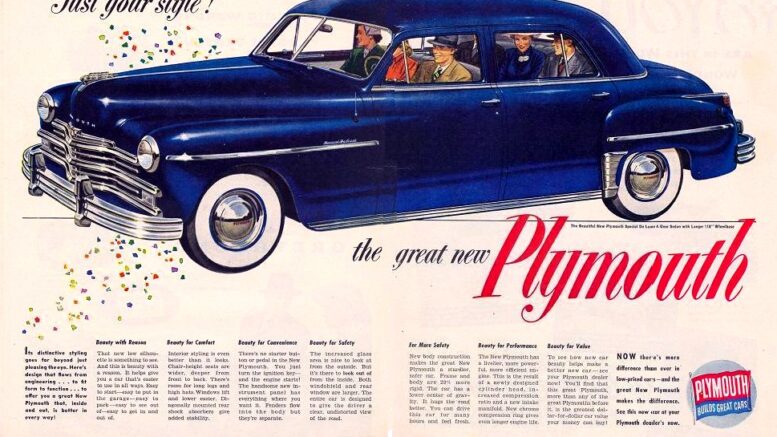 The 1950 Plymouth was available in “small or large” versions in either two-door or four-door designs. (Compliments Fiat Chrysler)

Q: Greg our local paper, the Lakeland Ledger, gave us a great special publication from Gatehouse Media titled “CARS We Remember: The Show on the Road.”

It has 48 pages of information written mostly by you and you did a wonderful job. I have been in the car hobby all my life and I am 82.

I don’t mean to brag, but I have a very great knowledge about all phases of automobiles. In reading the entire 48 pages, I only found one small error and I would just like to bring it to your attention. It was at the very end of the article, the last two sentences of “Chrysler and the war years.” It says in Mid-1949 the new series II Chrysler Windsor and Dodge Coronet arrived. For the Desoto and Plymouth, they had to wait until 1950 for their new motifs to surface. 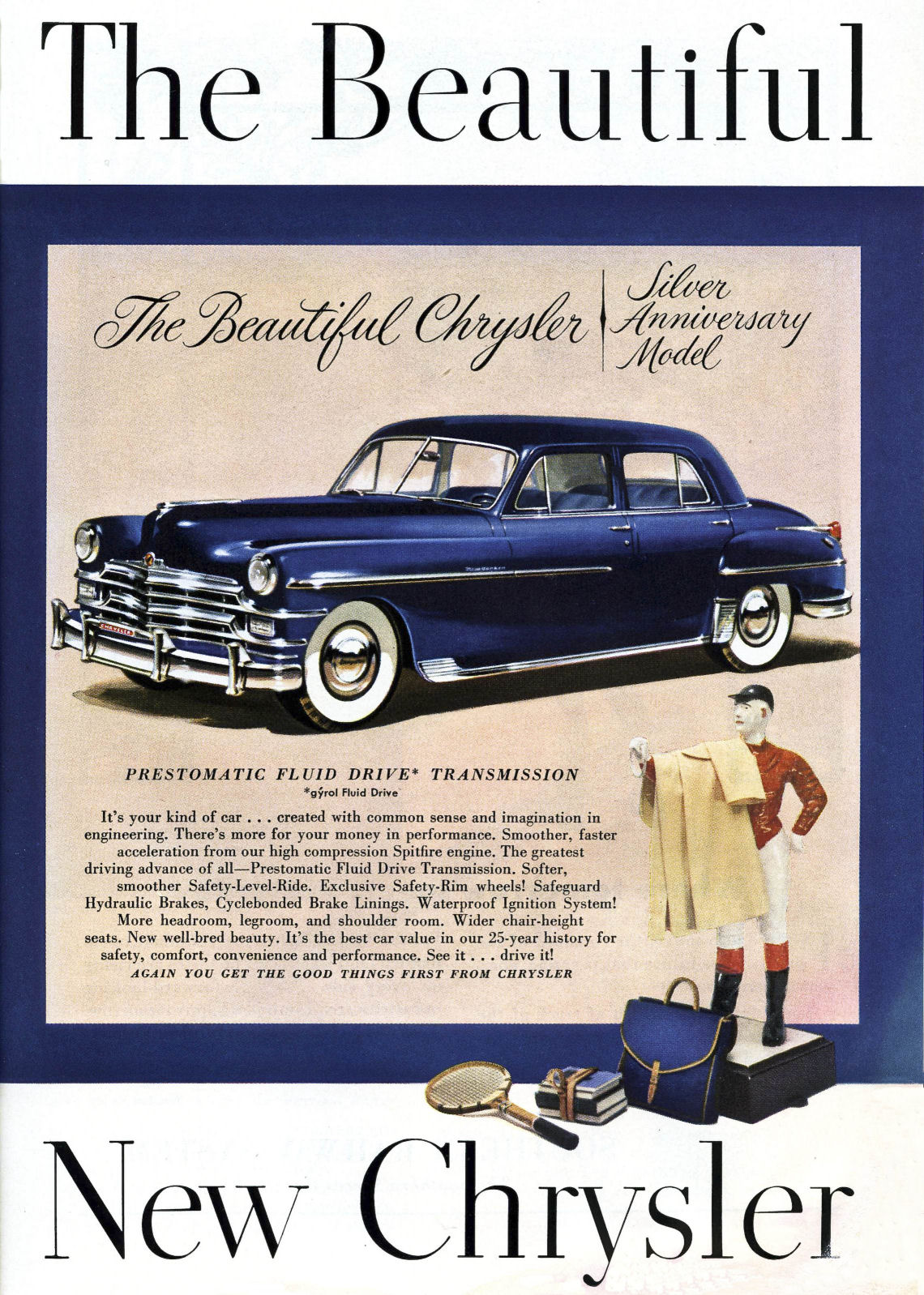 Chrysler Corporation introduced its all-new line of post war cars in 1949, but the cars didn’t arrive to dealer showrooms until mid-1949. Competitors had their new 1949 models at dealer showrooms in late 1948, making or a short year of sales. (Compliments Fiat Chrysler)

This is not true. In March 1949 – I think it was March – the second series came out with all the Chrysler lines. I clearly remember riding the city bus to downtown Orlando, Florida, to the Chrysler Plymouth dealer to see the new 1949 models, and then walking to the Desoto and also the Dodge dealer to see their new cars.

Then my parents bought a second series 1949 Plymouth Special Deluxe 4 door sedan. This is the car I learned to drive in. I hope you don’t think I am a nitpicker, but I just couldn’t let this pass. Don Allen, Winter Haven, Fla.

A: Absolutely not Don! I am very happy you enjoyed that special issue and we’ve received many wonderful comments from people who kept the issue as a conversation piece.

And, you are correct that the Desotos and Plymouths did arrive in mid-1949, and to much consumer interest. That said, Chrysler had some introduction problems and delays, which pushed back its actual assembly line production of the 1949 post war models until January of 1949.

Most of the competitor 1949 cars were already in dealer showrooms by December of 1948, meaning Chrysler was in for a tough sales year regardless of how nice their new models were. In the end, the 1949 models were being “leftover” discounted as the 1950 models were in showrooms by December of ‘49, adding to the woes of a short sales year. It was a costly delay as Chrysler fell out of second place in sales and dropped to third, behind GM and Ford, respectively.

Although ’49 was troublesome, sales of the new 1949s did outpace its 1948 sales, which was one major high point. And instead of those grand old, multi-window, large interior “bathtubs” we came to love that debuted in 1942 and ended in 1948, the new Chrysler designs were lower to the ground, nicely designed, with roomy interiors and good luggage space. Then, just as things got moving selling the leftover 1949s and new 1950s, Chrysler took another “blow to the guts” when the auto workers at all Chrysler plants went on strike for the months of February, March and April of 1950, ruining what would have been a good sales year. 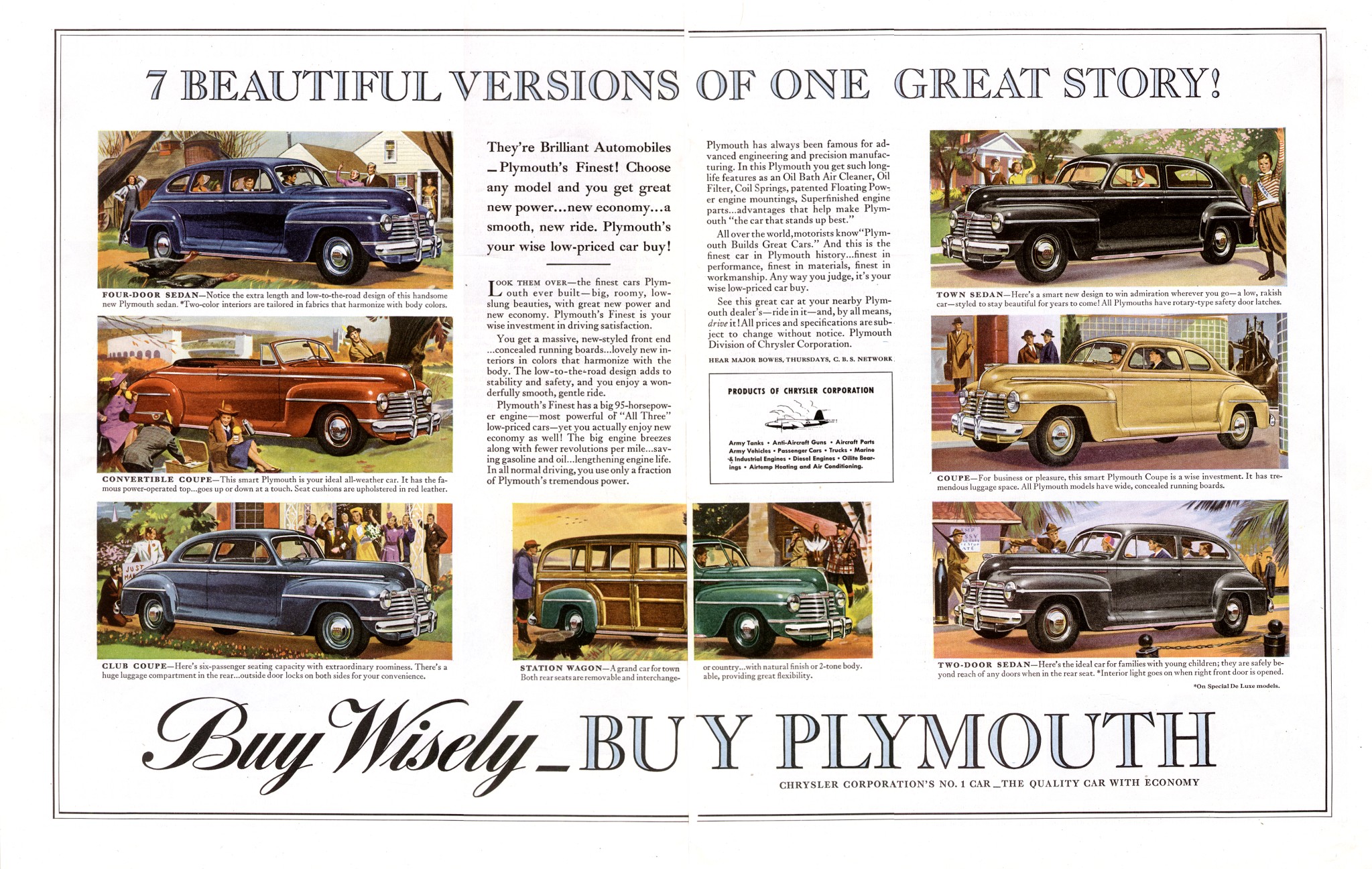 The 1942 through 1948 Chrysler vehicles were popular, roomy designs. They offered outstanding passenger room, especially rear seat passengers. This ad is for the 1942 Plymouth. (Compliments Fiat Chrysler)

To further complicate things, next thing you know the Korean War starts, and just as the government did in 1943 they limited car production, although not stopping it completely. This meant Chrysler would not have full build capacity until the end of the mandate in 1953.

Zeroing in on those 1949 Plymouths you took the bus to see and then took your driver test in, (and with thanks to allpar.com for some important info), there were two series from 1949 to 1952. The smaller wheelbase of the two was called the Deluxe in 1949 and 1950 followed by the second series dubbed the Concord for 1951 and 1952. The wheelbase was 111 inches for the three models, i.e. business 2-door coupe, fastback 2-door sedan, and 2-door wagon. A larger Plymouth available in coupe or four-door designs rode on a 118.5-inch wheelbase and names were changed to Cranbrook and Cambridge in 1951.

Perhaps most memorable for the 1950 Plymouth was the inaugural NASCAR Labor Day Southern 500 where some 75 cars took the green flag on America’s brand-new superspeedway in Darlington, SC. A little fastback Plymouth, with just 97 horsepower and slowest qualifying time, was no class for the powerful GM brands like Oldsmobile, Buick and Cadillac when it came to power, yet one thing it did much better than the competition was not blow its tires off the rims on the high-speed banking.

By the end of the 1950s, Chrysler produced numerous outstanding vehicles including this 1956 Chrysler 300. (Compliments Momentcar.com)

While the competition struggled with extensive tire woes necessitating either lots of time in the pits tire changing or being hooked to a tow truck after a crash, Johnny “Madman” Mantz drove his little Plymouth 6-cylinder down low on the track’s apron and won the race by 9-laps over runner-up Fireball Roberts in a ‘50 Oldsmobile Rocket V8. Mantz utilized over-the-counter Firestone truck tires purchased at a local tire store and ran the entire race on them easily. This race is still talked about to this day as a memorable event for the Plymouth brand. Mantz won $10,510 for his winning performance averaging 75-MPH.

By 1953, things at Chrysler were getting back to normal and all was basically pretty good in the auto industry. The Hemi engine, which debuted in 1951 in the Chrysler Windsor/Saratoga models was a 331-inch design and would become the famous engine it is today.

Chrysler ended up that 1950 decade with some true automotive legends, from those beautiful Chrysler 300s, Desoto Adventurers to the top line Imperials that battled Lincoln and Cadillac for upper-class attention.

There you have it Don and thanks for the very nice comments on our “Cars We Remember” special edition.