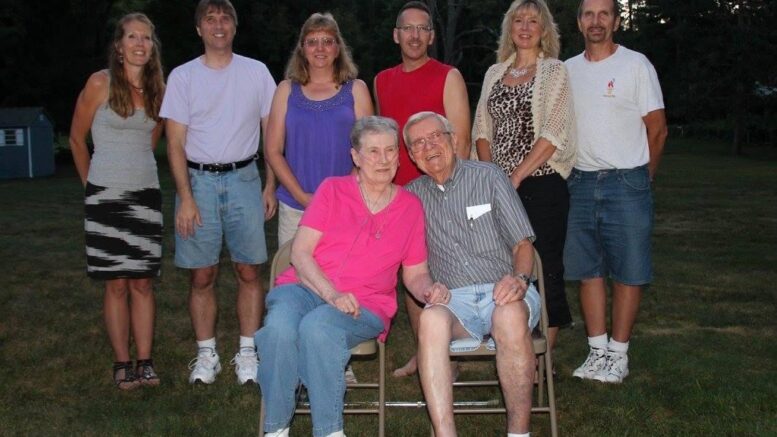 Pictured, seated, are Patricia and Joseph Federowicz,, along with their six children. Patricia passed away in 2019, and Joseph in April of this year. A funeral mass for Deacon Joe will be held at 10 a.m. on Sept. 12 at St. Margaret Mary Church in Apalachin. Calling hours are planned on Sept. 11 from 4 to 7 p.m. at Estey, Munroe and Fahey in Owego. Provided photo.

A local family was unable to hold a traditional public funeral for their father in the spring due to coronavirus concerns. Like many families experiencing the loss of loved ones during the pandemic, the process of grieving and healing has been disrupted.

Deacon Joseph Federowicz, of Apalachin, N.Y., passed away on April 8. A native of Wilkes-Barre, Pa., he moved to the southern tier in the late 1950’s. With his wife, Patricia, they made Apalachin home for 50-plus years. “Deacon Joe” faithfully served at St. Margaret Mary Church in Apalachin for more than 30 years.

Daughter Judy Hawkins, remarked, “We lost him during the height of the pandemic.”

After a fall at home, Deacon Joe was taken to the hospital where he underwent hip surgery. Because of coronavirus, he stayed in the hospital alone for five days without family.

Pictured, is Deacon Joseph Federowicz of Apalachin holding his first great-grandson, Dylan, after participating at his baptism in 2011. Deacon Joe passed away in April after faithfully serving St. Margaret Mary Church in Apalachin for more than 30 years. Provided photo.

Judy added, “It was heartbreaking for us to be kept away from him during that critical time.”

Judy recalled that always in her father’s possession was his prayer book, and where he wrote notes about conversations with individuals he ministered to.  Although Deacon Joe didn’t have his family by his side at the hospital, he had taken along his prayer book.

Deacon Joe was buried alongside his wife on April 14 following a private service.  The couple had celebrated their 60th wedding anniversary in 2017, and marked the occasion by renewing their marriage vows at the church. Patricia passed away in 2019.

“He died during Holy Week,” Judy said, and during an occasion that seemed significantly fitting for a man who was devoted to serving others. Deacon Joe was a recipient of seven sacraments from the Catholic Church, an honorable distinction that Judy said would have made him proud.

A private funeral for the family was streamed live, and as many as 80 viewers tuned in for the Zoom service. A YouTube recording featuring Deacon Joe’s grandchildren playing his favorite music was added, and it was complete with the casket closure and carrying of the casket to the car, along with the cemetery internment.

“We were thankful to have this ability to stream the funeral service,” Judy said, and continued, “Although it was a surreal experience.” 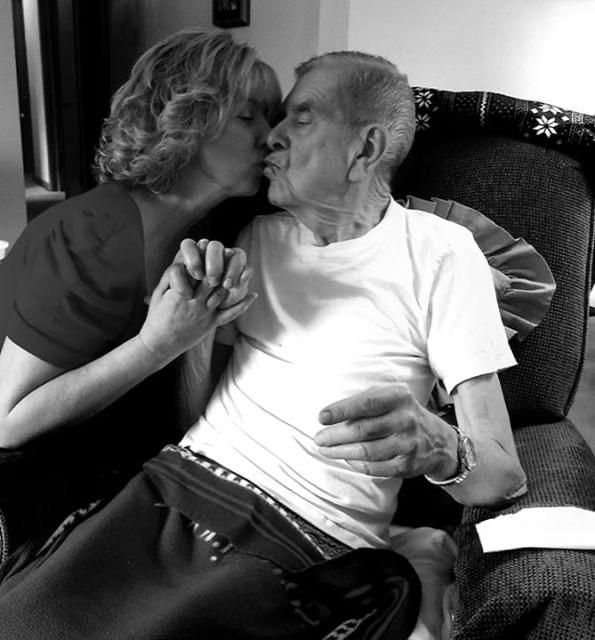 Judy Hawkins embraces and kisses her father, Deacon Joseph Federowicz, prior to his hospitalization in April. Federowicz passed away at the height of the pandemic, and family members were not able to be with him at the hospital in his final days due to coronavirus concerns. Provided photo.

The son of a Polish immigrant, Federowicz was raised in a traditional blue-collar family; his father was a coal miner and his mother was a cook. After high school,  Federowicz served with the Navy Reserves for five years. He then took advantage of the G.I. Bill, went to college, married and started a family, and soon found long-term employment at IBM Endicott and at the Owego facility.  Federowicz earned a Bachelor’s degree in Business Administration from Kings College in Wilkes-Barre and Elmira College, which accelerated a career that spanned three decades as a contract negotiator and consultant.

Federowicz was engaged in multiple activities in Apalachin. He joined the Jaycees, and also served as President of the Apalachin Youth Athletic Association (AYAA). It was Judy who nudged him about playing ball, which prompted Federowicz to help create Cinderella Softball teams.

The Federowicz’s purchased the first lot sold in Apalachin’s Clover Road development, and today that is a bittersweet memory for the family since the house was recently transferred to new owners.

Referring to the church and the multiple programs he was involved with, Deacon Joe had shared in a previous story for this newspaper, “I’ve never enjoyed anything more.”

Judy remarked, “There was always somebody dropping by the house,” adding, “My father never turned anyone away.”

His ministries led him to Lourdes Hospice as Chaplain, and where he worked alongside his wife, as well as the Elmira Psychiatric Center and Catholic Charities as a teen pregnancy counselor, among others.

A tribute video in honor of Deacon Joe for his participation at numerous ceremonies and events notes, “None have meant more to him than those involving his own family,” which featured several marriages, baptisms and confirmations.

Individuals offered endearing comments about Deacon Joe on the Tribute Wall of the funeral home’s website, and one in particular, recognized him as, “The epitome of servant hood.”

Long-time friend, Ken Smith, shared an example of Deacon Joe’s compassion and kindness. Smith remarked, “40 years ago I was going through some troubling times, and Deacon Joe helped me through it. We became friends and I eventually started going with him on ministry visits,” adding, “He never stopped caring.”

The Federowicz family, sons Joseph, Eugene and Timothy, and daughters Judy, Kathy and Mary Ellen, and their families, look forward to seeing friends, extended family and the community at calling hours planned on Friday, Sept. 11 from 4 to 7 p.m. at Estey, Munroe and Fahey Funeral home in Owego. A funeral mass will be held at 10 a.m. on Saturday, Sept. 12 at St. Margaret Mary Church.

Be the first to comment on "A legacy of love"