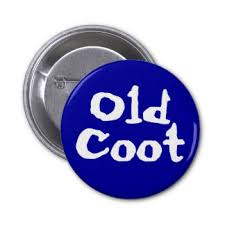 I was hanging out with my friend Bishop in our backyard the other day. She’s married and has a different last name, but she’s still Bishop to me. That’s how old coots are; they don’t adjust to change.

It was a hot, muggy afternoon and we were wading around in our tiny, shallow, garden pool like a couple of two-year olds, shooting the breeze while my wife swept off the back porch, not quite ready to join us in the water.

Then, I heard Bishop utter a word I hadn’t heard in decades, BATTLE-AXE! It’s funny how a word can transport you to another era, in this case, back to the 1950’s when battle-axe was a common term, at least in the Three Stooges, Abbot and Costello, W.C. Fields, and other old rerun movies that I and my 10 year old friends consumed at the movie theater every Saturday afternoon. It was also in everyday use as well.

I wouldn’t be surprised if many of you are not familiar with the term or exactly sure what it means. It was quite popular back in those dark ages of my youth. I’m not sure exactly who Bishop was talking about; I was half listening as usual, but when battle-axe hit my ears, I laughed out loud. She’s a lot younger than me and I was surprised to hear her say it.

Battle-axe, according to the dictionary, is an aggressive, domineering, antagonistic, overbearing forceful woman. A female bully in other words.

This is where I step in it, continuing on with a sexist topic from an era when women who didn’t act “lady like” were labeled with a whole array of negative terms – terms that men escaped even though their behavior was identical; a double standard of the vocabulary variety.

How about fishwife, old bat, hag, nag or backseat driver? That’s quite an array. Men were spared the critique; they were labeled with more positive terms like strong willed, forceful, titan, sharp businessmen and the like.

By the time the 1980’s rolled around, battle-axe fell by the wayside, but women still didn’t get a break. If they were the least bit assertive, they were called aggressive, pushy.

Pushy men weren’t labeled. My wife and I have five daughters and seven granddaughters (not counting the boys), but I don’t advise calling any of them a battle-axe. You just might get a surprise or a big laugh, like the one I gave Bishop.