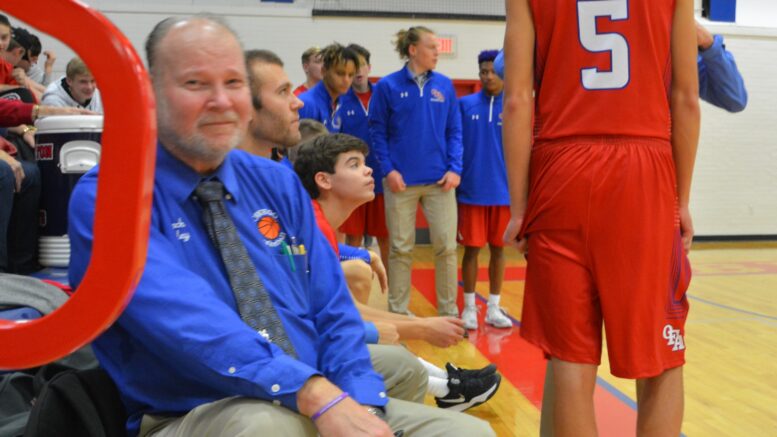 Pictured, is Coach Sibley, who passed away at the age of 69. Provided photo.

To put it mildly, the year has been a challenging one. But amid the divisiveness and the vitriol, the animus and the anger, I choose to listen to the heartfelt musings of a man who taught so many of us the gentle kindness of character and the sage wisdom of loyalty. Our friend and our coach, Charlie Sibley, passed away on Aug. 24 at the age of 69. He had suffered a series of mini-strokes over the past few months, and then a bilateral stroke put him in dire straits.

His death has impacted a great many people. His life will continue to impact even more long after I (and those reading this) am fertilizing daffodils. A coach’s impact can last many lifetimes.

But Charlie wasn’t only a coach teaching the finer points of basketball, he was a man wrapped in the gentle passion of selflessly giving the most precious commodity we can give – our time.

“Our 4th grade coach can’t make it to Athens tonight – can you fill in for him, Charlie?”

Of course he’d say yes – sometimes even at the expense of his golf night. So from Athens to Norwich to Scranton and even to the Bronx, Charlie was a barnstormer of the past, taking 5th graders or 9th graders or Varsity aged kids to travel tournaments, AAU events, and the like.

And although he was deeply loyal to Owego basketball, this certainly didn’t preclude him from working with some of the best players to ever come out of Tioga County (like Toby Foster of Candor and Kyle Dougherty of Owego / Athens). Charlie was all-inclusive when it came to teaching kids how to shoot free throws or how to pivot on either foot (our discussions about pivoting were legendary).

As all great teachers do, Charlie was able to establish a rapport quickly with his charges, his calm demeanor and patience, his humility and natural charm – enveloping the youngsters in a coat of certitude. To truly teach a thing to anyone, trust must be developed. Charlie had the enviable ability to gain that trust in seconds, particularly because the man could shoot a basketball!

When I first met Coach Sibley, I was just a scrawny seven or eight-year-old kid hoisting up shots in the only gym located inside the Tioga County Boys Club (it hadn’t yet changed its name). This gym – most of you know it now as the small gym – was / is about 50 feet long and 30 feet wide. Imagine playing a full court 5 on 5 game in there!

Somehow we did it, and Charlie was there, 15 years older than me and four or five years into his coaching life. Who knew then it would go on for 50 years?

I fondly recall him swishing shot after shot from half court, which was actually the top of the key, but I didn’t really understand that at the time. I was just in awe of his ability to shoot!

As I grew older and after the Club built a larger gymnasium, I recall the many pick-up games that Charlie was such an integral part of. In those days young kids learned how to play by getting beaten up (literally at times) by older and more experienced players. Charlie was one of those guys for me.

I recall one time; I must have been 11 or 12, being run over at half court by a 200-pound freight train. Charlie ran by me and, with that sheepish grin we will never forget, said, “If you want to get better, you better get up.” And here I am, years later, recalling the simple brilliance of those words.

There are certain moments with certain people that stick with you for the long haul. Charlie Sibley will always be there.

I left the area in 1991 but returned about ten years later, family in tow. I hadn’t planned on coaching again for a while (I was feeling a bit burned out after coaching at a few different levels), but somehow managed to land the head job at Owego Free Academy in 2005. The first person I called was

Charlie – I told him we needed an assistant.

It didn’t take much convincing – he was as excited as I was. In the early 90s we didn’t have the video sharing capability that we have today. With that in mind, we had to scout games in person.

The road trips to Elmira, Norwich, Oneonta and all points in between will stay with me always. The comparison of notes, the discussions about seemingly simple basketball jargon, and all the talk about the merits of NBA vs. college basketball are all moments that will creep back to me in the twilight of my own life.

That first year together was magical – a Section IV title spearheaded by Jon Reynolds, Jack Keough, Joe Morabito and others. And there was Coach Sibs in his element, tasting the elixir that courses through the bodies of people like us, people who spring eternal when talk turns to games and strategy and competition.

Charlie stayed on that bench for the next 15 years – remaining loyal to OFA as always when I took a four-year hiatus and he returned as the assistant to Bryan Hathaway. Charlie, with Twizzlers in his gym bag and Orbit gum in his left pocket, was the one constant.

The kids always shared in his vices; prior to practices and games the line in front of Sibs might be six or seven deep, all waiting for their candy. The last four years were some of our happiest times together. We enjoyed unparalleled success together on the court and reveled in joyful camaraderie off it.

Team dinners, an early season tournament in Atlanta in 2017, fundraising outings, graduation parties, Captain and Crew golf tournaments, these were part of our history. And I will forever remember the Sectional title victory over Seton in 2019.

You must understand that Coach Sibley was a rarity – he never had a bad word to say about anyone; however, he was ultra-competitive and Seton was at the top of that list.

After we defeated them for the title, the one thing I will never forget is that look in his eyes and that grin on his face, as he said to me “Coach, we did it!” The big old bear hug he immediately wrapped me in will comfort me until the day I pass.

We live in a world polarized by sound bites and catchphrases. Coach Charlie Sibley did not live in that world. He was immune to it – his nature borne out of a calling. This calling was to give far more than to receive, to honor far more than to be honored, and to vouchsafe his time more than keeping it for him.

He was a character with great character. I can only hope both of my own children, who played many years for Coach Sibley, will be very much like him when they grow up.

May you Rest In Peace, Coach – the legacy you shared with us will only grow stronger as those you impacted so greatly continue to share your wisdom, your patience, and your love.

Be the first to comment on "Remembering Coach Sibley"