Pictured, from left, are Luca Iorga and Irena Horvatt, both of Owego. They are pictured in downtown Owego, and next to one of flags commemorating the anniversary of the ratification of the 19th Amendment, the colors of which represent loyalty (purple), purity (white) and hope (gold), and provide identity for the suffrage movement. (Photo by Wendy Post)

Aug. 18, 2020 marks the 100th anniversary of the ratification of the 19th Amendment, giving women the right to vote. And although the proclamation was not signed until Aug. 26, a day now recognized as Women’s Equality Day, Aug. 18 is a day that celebrates what many women, known as suffragists, fought for with marches, protests, and even jail in some instances, for about 70 years.

Locally, two women living in Owego are participating in protests for Black Lives Matter (BLM) and other causes, and are pushing for change. They, with the same tenacity as many of the pioneering women that have come before them, stand in solidarity to end the violence and hate that exists in the world, and to push for further equality.

We interviewed Luca Iorga last week along with Irena Horvatt, an Owego Free Academy graduate working at Cornell University. Both Iorga and Horvatt have participated and played an active role in the BLM protests at the courthouse square in Owego, protests that have been taking place over the last couple of months. For them, the fight for ‘equality for all’ continues.

“No one handed women the right to vote,” said Horvatt about those that had to fight for it. Today, Horvatt, Iorga, and a progressively younger generation are engaging in this protest era that is creating emotions and reaction from the diverse population in America as a whole; often, however, overshadowed by the violence that accompanies it. 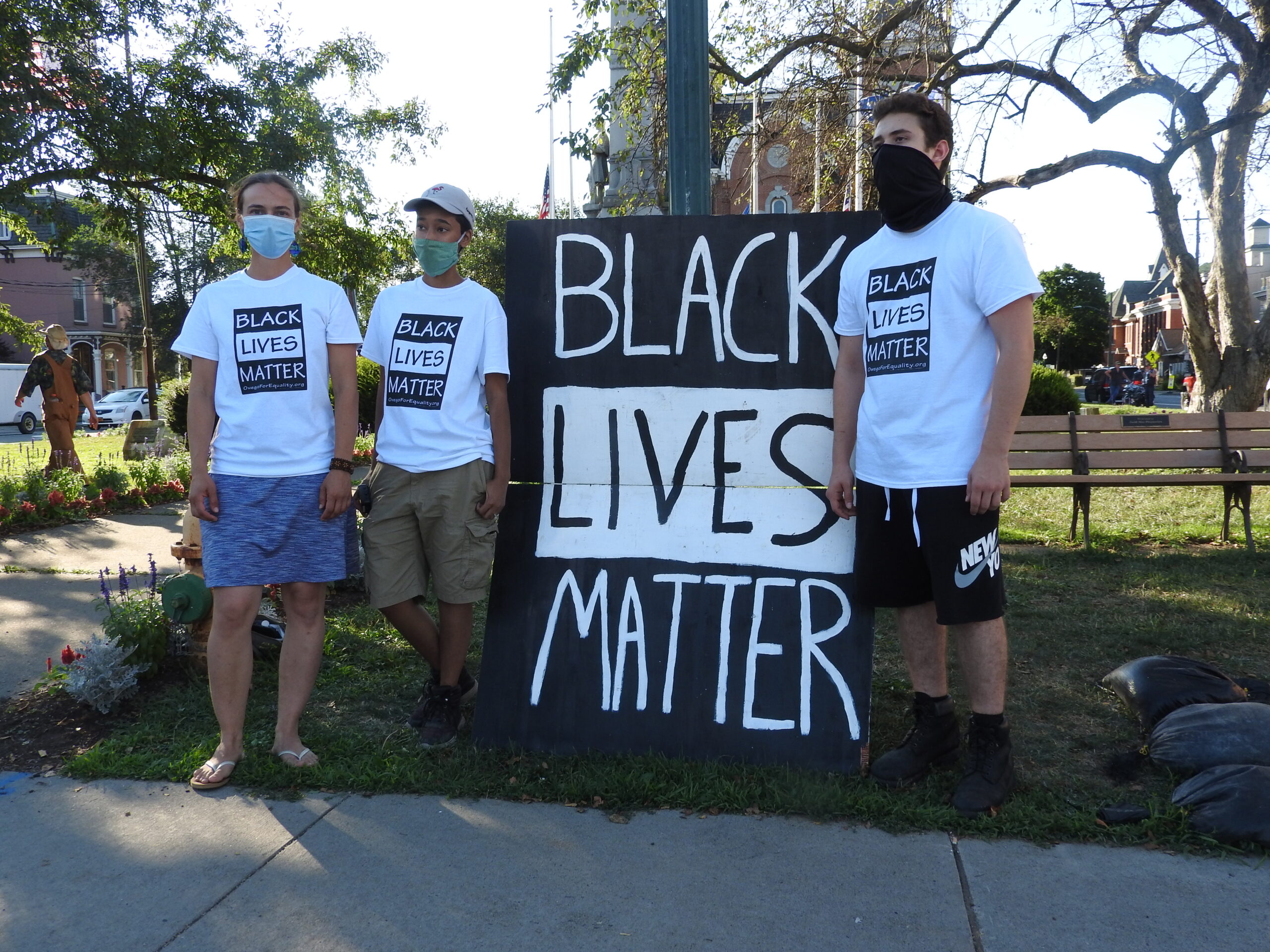 From left, Luca Iorga, Alek (local member), and David Almoney are pictured at the tail end of a protest on the Courthouse Square in Owego. (Photo by Wendy Post)

“There are, and always have been a few bad actors that will take advantage of large situations,” said Horvatt, adding that this outside violence has hurt the movement.

Iorga chimed in, stating that they have no tolerance for violence at their protest events or gatherings – all of them remaining peaceful in Owego, to date.

An overshadowing of violence

Some residents in Owego, N.Y. also have concerns about the protests, fearing violence or damage to the monuments on the Courthouse Square, and at the Sa Sa Na Loft memorial. At some of the larger, organized protests in Owego, scores of veterans and patriots can be found in attendance, keeping a watchful eye on the statues on the grounds. 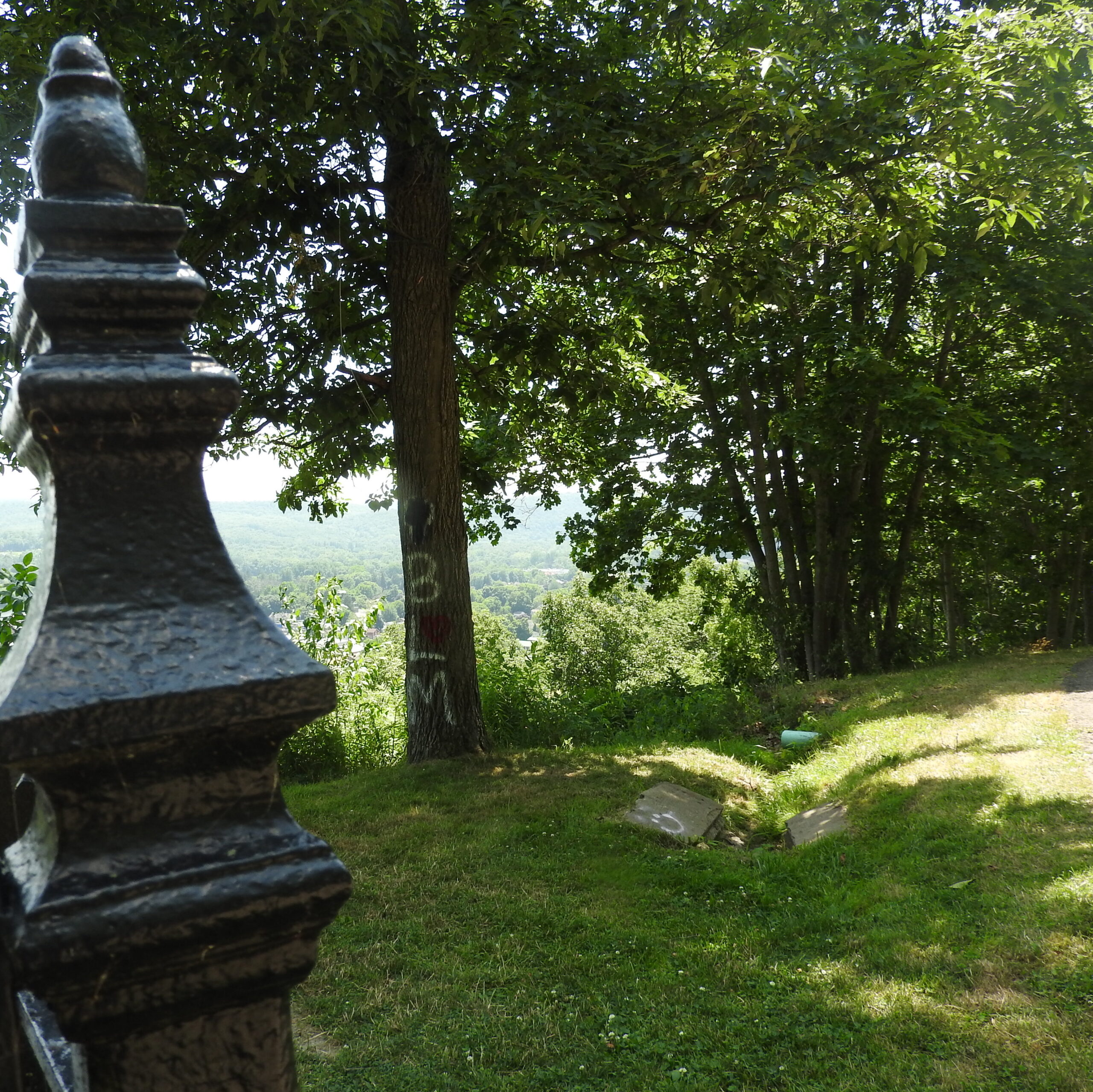 Graffiti was discovered on a tree nearby the Sa Sa Na Loft monument, located at Evergreen Cemetery in Owego. The graffiti was subsequently removed after an inquiry was made to local police and cemetery officials. (Photo by Wendy Post)

Last month, an anonymous tip arrived of some graffiti found near the Sa Sa Na Loft memorial, located at the high point in Evergreen Cemetery in Owego. The anonymous caller also feared that the statue might be harmed at the cemetery; but after an inquiry with the Owego Police Department and Evergreen Cemetery, the graffiti was soon removed, and never a word mentioned of its origin.

Iorga stated she was not aware of the graffiti, and further stated that they have no tolerance for violence at their events or gatherings.

The outline of a chain at the Sa Sa Na Loft memorial had an anonymous resident concerned that protests might have drawn the attention of opportunists, with an intention unknown. (Photo by Wendy Post)

We wanted to find out more, however, about why the two women joined the movement.

Iorga, who is a web designer by trade, moved to Owego two years ago from New York City. Never witnessing racism until she moved to a rural community, Iorga stated that she was inspired to join the group at the Courthouse after she drove by them one day.

Horvatt went to High School with the “Owego for Equality” organizer, Colin Evans. Evans, himself, is a long time activist, fighting for climate change, equality, and other social justice reforms.

For Horvatt, she wants to keep the conversation going and raise awareness about inequalities.

“I would be content if anyone would consider a perspective different than their own when they think of inequality,” she stated during an interview last week.

Iorga echoed this, stating, “If people don’t see something, it doesn’t exist.”

Referring to herself as a fairly privileged white woman living in America, therefore not being subjected to the same type of discrimination, Horvatt went on to state, “I hate seeing people of color living in fear. I’m in a position to use my voice and less likely to get in trouble for it.”

“We’re on a social tipping point, and I would like to be on the right side of it,” she added.

Owego and the Underground Railroad

But as for Owego itself, the argument on whether racism exists can only be measured by the actions of its citizens, and history certainly denounces any claims that the area, in itself, discriminates.

According to Emma Sedore, and various historical records, Owego and Tioga County served as part of the Underground Railroad, specifically in the mid-1800s.

Sedore, who serves as Tioga County’s historian, posed a question to another historian, Ed Nizalowski, about two years ago, “How often would you estimate the enslaved people came through Owego and Tioga County?”

In his response, according to Sedore, an actual escaped slave named John Jones, who came in 1844 and was able to stay in Elmira, kept records that were described as fairly accurate. In those numbers, he estimated that approximately 800 arrived during the 1850s. Broome County Historian Gerald Smith estimated about 400 to 600 came through Binghamton to points north.

But in spite of Owego’s past, both Horvatt and Iorga believe that racism still exists.

“You don’t have to have tendencies to be indifferent or biased,” said Horvatt, with Iorga adding, “There’s value to our presence at the Courthouse Square.”

As far as the current celebrations surrounding the right to vote for women, however, Horvatt said that celebrating the anniversary, for her, is bittersweet.

“I know the history of the women’s suffrage movement excluded black women, who were thwarted from going to the polls until the Voting Rights Act of 1965 was signed,” said Horvatt.

Many racist tactics, to include poll taxes, state violence, education as a litmus test, etc., according to Horvatt, were used to keep black women from the polls in varying states, making it nearly impossible for black women to vote, even though they should have had the right to do so.

She continued, “It is an unfortunate reality that white suffragettes did not come to the aid of their black counterparts in lieu of securing the vote for themselves. Black women were a crucial part of pushing the suffrage movement forward.”

Because of these struggles that have spanned decades, both women plan to continue fighting for equality, something they feel is necessary.

“We’re carrying the torch, and in 2020 we can work on past mistakes,” said Horvatt.

As for the protests in Owego, both said they would be out there as long as they can, or need to be.

Most people that see the protestors, who are generally at the Courthouse Square between 4 and 6 p.m., are thankful that they are there. Others, according to Iorga and Horvatt, are not so friendly to them.

Horvatt stated that Black Lives Matter protests look different in every state and city as the needs are different.

As for the violence, although protesting has led down this path more recently and in cities like Portland, Oregon, Rochester, N.Y., and even in neighboring Binghamton, Iorga and Horvatt noted that most of the protests have remained peaceful.

“Martin Luther King was non-violent, and he got shot in the end,” said Horvatt.

Both carry hope forward with them, however.

“One hundred years ago things were much more radical; the fact that we’re having the conversation brings me hope,” said Horvatt. Iorga echoed this, noting that things are going to take time.

A recent protest at the Courthouse Square in Owego saw 75 arrive throughout the two-hour window to include members representing Truth Pharm, Owego for Equality, and organizations concerned about racism and police brutality, specifically against legislative proposals, and to introduce the People’s Protection Plan. 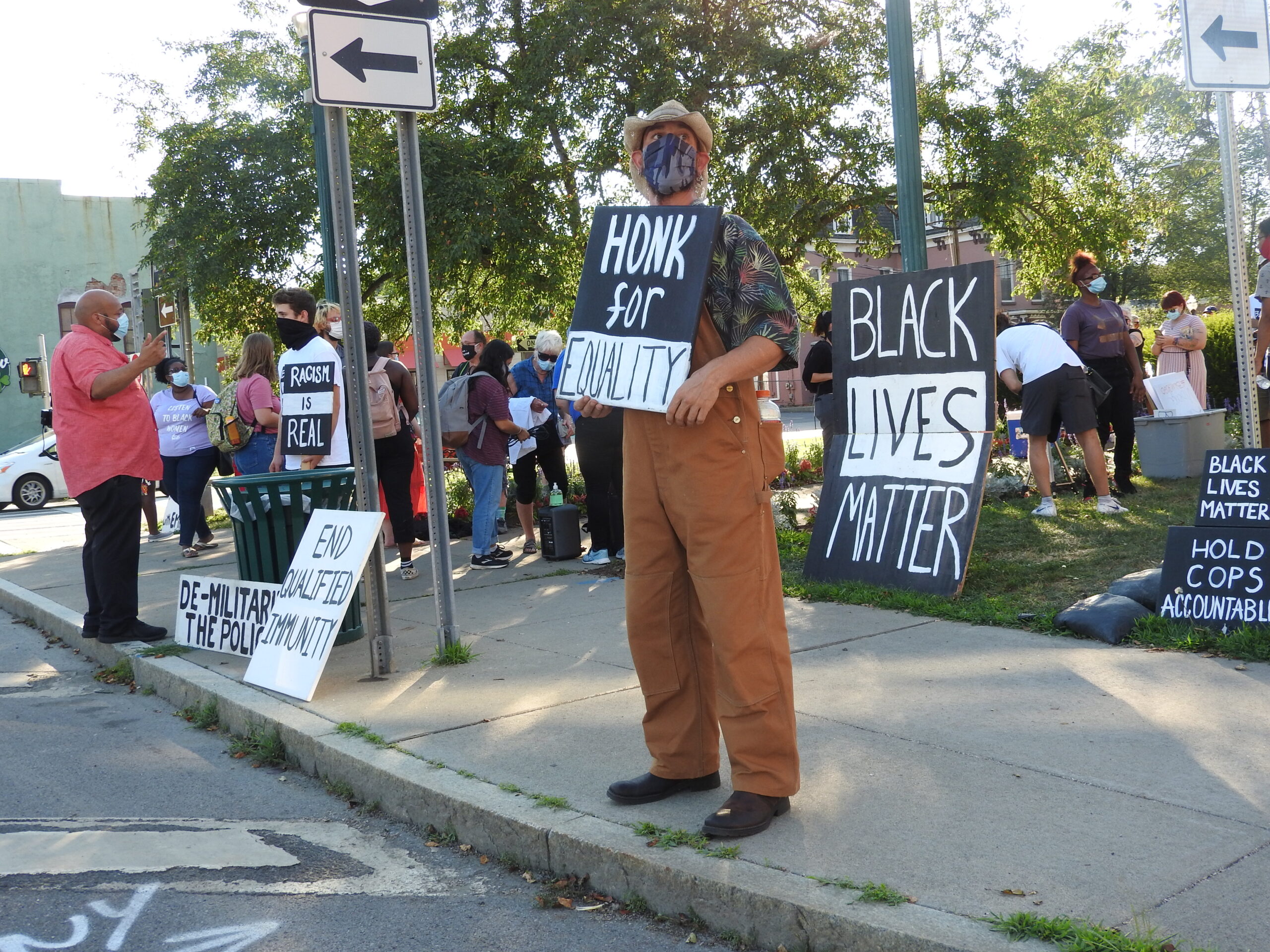 A protester named Luke holds a “Honk for Equality” sign while others assemble at the Courthouse Square in Owego. (Photo by Wendy Post)

In the event’s details, organizers of the movement wrote, “These proposals push for a totalitarian police state. As we all know, peaceful protesters have been demonstrating against racism and police brutality, and to demand greater accountability from law enforcement departments.”

This protest was surrounded by several others taking place in the area. For the July 31 protest in Owego, police officers were observing nearby, often interacting peacefully with the protesters.

“We had a lot of positive support,” said Iorga, while another protester commented, “Some that see us shout expletives, others yell out that there is no racism in Owego.”

Other protesters involved, and who chose to remain anonymous, stated, “It’s rewarding, too,” of the movement.

Either way, protesting seems to be a movement prompted by the younger generation, and an effort that is certainly aligning with those in the past as activists continue to strive for equality for all.

Objecting to the premise that “All Lives Matter”, BLM activists, including Horvatt and Iorga, claim that many forget to include people of color.

“It’s a movement that’s growing, and we need more people to come out,” said David Almoney, another BLM supporter and activist.

“We don’t really know what we’re doing, we just know what we are doing it for,” said another protester as a car drove over the bridge, past the courthouse, and beeped a few times in support of the movement.

And ending on a reflective moment, I often wonder what people were feeling when they watched over 400,000 flock to Bethel, N.Y. on Aug. 15 in 1969, and during an era of civil unrest, for a three day festival on Max Yasgur’s dairy farm. They were searching for unity and peace, but we’ll save that for another story.