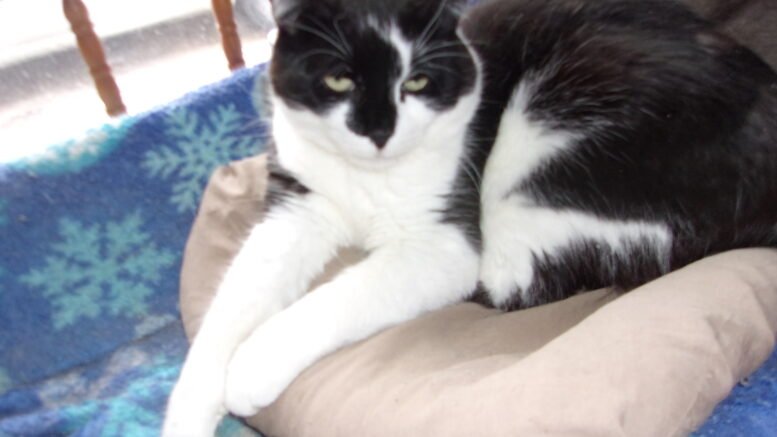 Hello there, Oreo here. I came to Maddie’s Meadows 4-1/2 years ago with a bunch of other feral cats. I was 5-months old and cute as a button because I have shorter legs (probably means a have some Munchkin in me), but they tell me I was a handful.

They were trying to catch me one day when I was about two years old and put me in a carrier. All of the other cats had been caught but me. That is because I am extraordinary at being elusive.

Around and around the house we went, me being chased by Nancy; then she brought in reinforcements and I was being chased by two people. They finally had me cornered on the upstairs porch in front of a screened in window.

I knew my time being free was short until I pushed out the screen and jumped from the upstairs window! A tree growing close to the house broke my fall and I landed without being injured.

I am now free outdoors! Nancy tried and tried to catch me but I was all over the place and she couldn’t. I was running free for five months. It was awesome. She was leaving food on her porch for me and I didn’t have to worry about a thing.  However, another cat came on the scene and started to fight me for the food she was leaving. That wasn’t much fun. Nancy put out a trap to catch one of us with delicious smelling food.

Well of course, I walked right into that trap because I was hungry. The next thing you know I’m back inside the house in a cage. She also caught the other cat, One Eye was his name, and he was here too.

After about a day Nancy came over to my cage and let me out. I of course forgave her and let her know there were no hard feelings. I gave her a couple of head butts and declared game over!

One Eye and I became friends because there was enough food for everybody. I don’t try to get out anymore. Life is good here.