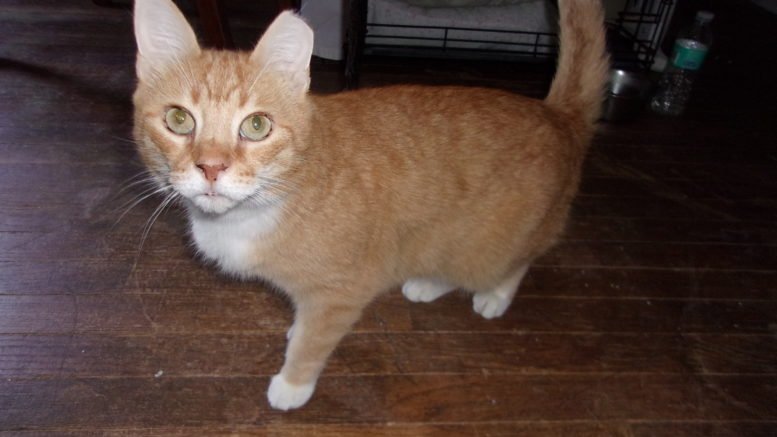 Say hi to my miracle child, Sox. He recently came back to me because the previous owner said it wasn’t working out. After three years! I couldn’t figure it out because he seems like a sweet boy, but whatever.

I took him to the vet to get an FELV test and surprisingly the vet said that he tested positive for FELV. He was the only cat in the household and he had been tested before he was adopted and he was negative then.

This was very upsetting news because FELV is highly contagious and always fatal. I couldn’t keep him here because there is too much potential for other cats to get sick, even if I kept him in a separate room.

There is high potential for the disease to spread since I might leave his food dish out or not latch the door to his room. I tried to find someone to volunteer to foster him by advertising his predicament on my Maddie’s Meadows page. His story was also told on the Happy Tails, Owego site and Angel Eyes’ site. No one came forward.

He didn’t have any symptoms, so it was possible he could potentially live for years before he succumbed to the disease. As a last stitch attempt to save him I had him retested. This time he tested NEGATIVE!

The vet told me that it was rare, but sometimes they could test false positive and she assured me he was indeed negative. It was explained why, but I wasn’t really registering anything other than he was negative.

Praise the Lord! So Sox is happy and healthy and still living large at Maddie’s Meadows. If you would like to help me to take care of these beautiful kitties by donating, please send your checks to Maddie’s Meadows, P.O. Box 445, Owego, N.Y. 13827.