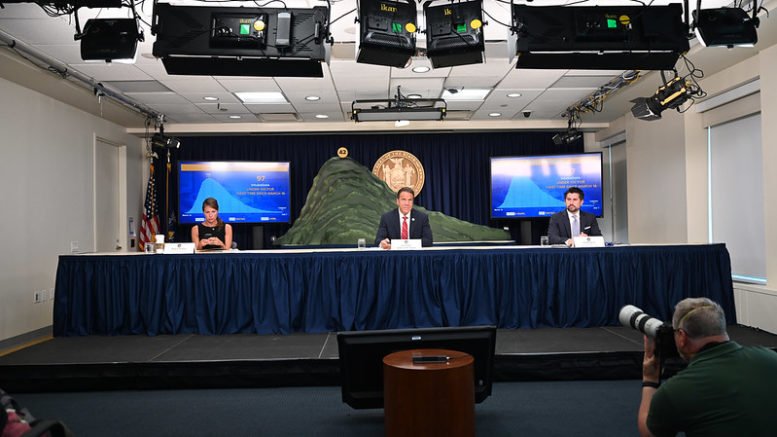 Governor Andrew M. Cuomo today announced malls will be allowed to reopen in New York State this Friday under certain conditions while the state will decide by early August if schools can reopen in September. The Governor said malls would need special air filtering systems, MERV-13 or highest available, to be allowed to reopen. Behind Governor Cuomo is a mountain installation representing the curve of COVID-19 infections in the state, starting from the first day of infections, March 1st, to the peak number of infections/deaths on Day #42, culminating to the gradual decline of cases by Day #111 that continues today to Day #130. (Kevin P. Coughlin / Office of Governor Andrew M. Cuomo)

Governor Andrew M. Cuomo today announced that New York State will decide whether schools will reopen in the fall during the first week of August. New York State is now consulting with stakeholders on guidance, which will be finalized on July 13. Plans to reopen schools are due on July 31.

Governor Cuomo also announced beginning Friday, July 10, malls can open in regions that have entered Phase IV of reopening if they have implemented an enhanced Heating, Ventilation and Air Conditioning – or HVAC – filtration system and follow proper ventilation protocols. HVAC systems will be required to include filters with a Minimum Efficiency Reporting Value – or MERV – rating of which filters out the COVID-19 virus, but can, if the system makes additional protections, run on a minimum MERV of 11. Ventilation protocols include increased outdoor air, reduced air circulation, longer system run times and frequent filter checks.

The governor also updated New Yorkers on the state’s progress during the ongoing COVID-19 pandemic. Long Island enters Phase IV of reopening today. The number of new cases, percentage of tests that were positive and many other helpful data points are always available at forward.ny.gov.

“We have been consulting all stakeholders on guidance for how a school would reopen in September. We have 700 school districts in this state, and they range from rural to urban to suburban areas. Localities are very involved in their schools and school decisions, so we have been meeting with them,” Governor Cuomo said. “During the first week of August, the state will announce a decision on whether or not those schools reopen, and we want to make that decision with the best available data because facts change here day to day and week to week. A week can be a lifetime with this virus because everything changes so quickly. The schools say they need a decision made by the end of the first week in August so they can then turn on the switches and get everything ready for September, and we’ll look at the data in that first week and then we’ll make a decision.”

Today’s data is summarized briefly below:

Of the 57,585 tests conducted in New York State yesterday, 692, or 1.2 percent, were positive. Each region’s percentage of positive tests over the last three days is as follows:

The Governor also confirmed 692 additional cases of novel coronavirus, bringing the statewide total to 398,929 confirmed cases in New York State. Of the 398,929 total individuals who tested positive for the virus, the geographic breakdown is as follows: