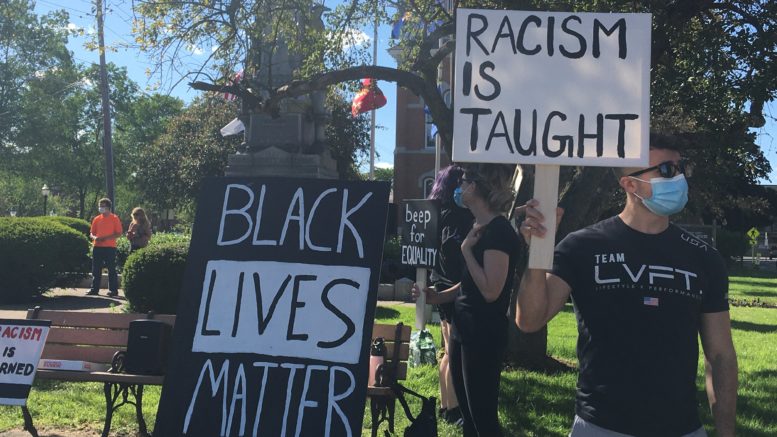 A group of silent protesters could be seen at the Courthouse Square in Owego, N.Y. throughout the week. (Photo by Wendy Post)

Pain and anger have cut me wide open again with the recent killings of Ahmaud Arbery, Breonna Taylor, and George Floyd. I’ve begun expressing these feelings in conversations with friends in the community and on social media. Maybe because I’m a recently retired Law Enforcement Officer (LEO) and I’m also African American, many people showed interest in my thoughts and somewhat unique perspective.

Since the Gettysburg Times invited me to share my thoughts and experiences, I decided to use this opportunity to speak to a wider audience, only hoping to help. The following are solely my thoughts — I’m not speaking for other LEOs of color or anyone else.

Last year, after 25 years, I retired from law enforcement. I’ve described those years as “hard time on ‘the thin blue line.’” I’ve hung up my “blue uniform” but still have to wear my “black uniform.” In other words, I’m a civilian again — a black civilian. This black uniform doesn’t come off.

Reports of racial injustice to fellow African-Americans always force me to reface my own encounters with racism. Retirement and living during a pandemic have given me time to reflect on all of those experiences. The presence of systemic racism and how the denial of it protects people from being held accountable are still undeniable.

Keeping cadence with my white colleagues while marching on “the thin blue line” wasn’t easy. I saw another line within that line. I was confident everyone would back me up, physically, because of my “blueness.” However, I didn’t have that same confidence about my “blackness.”

Throughout my career, I noticed loyalty to “the thin blue line” often blinded some of my colleagues from seeing racial injustice. Few members of the force could recognize subtle racist acts. I overheard others whisper statements that let me know who harbored racist attitudes. The “whitesplaining” away of racism’s existence was regular. 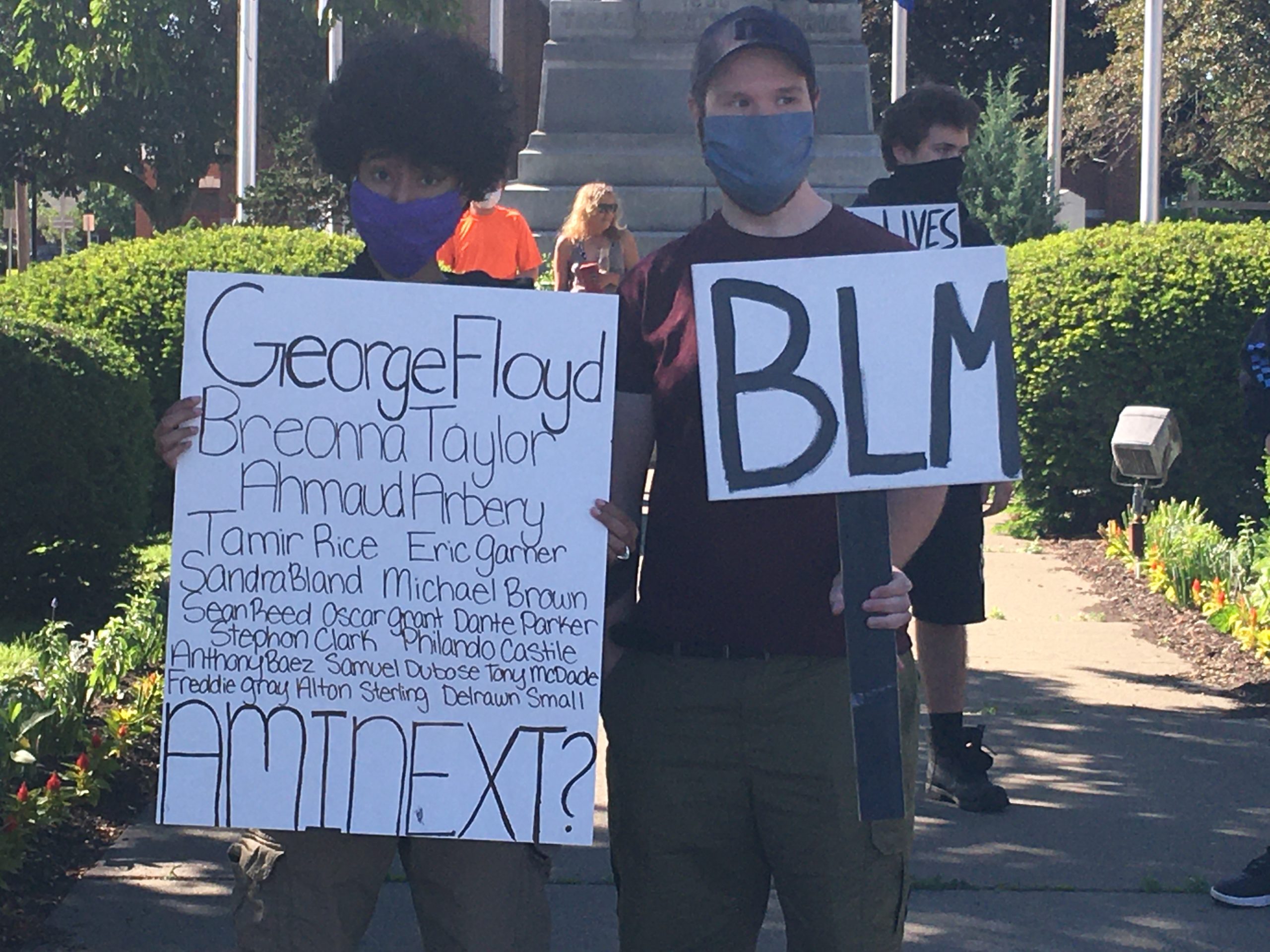 A group of silent protesters could be seen at the Courthouse Square in Owego, N.Y. throughout the week. (Photo by Wendy Post)

I extended grace in those conversations because I understood they were uncomfortable. I used humor or the situation as a teaching moment when I pressed or corrected anyone.

Things were different on the street. White and black citizens saw my “blueness” and my blackness. Repeatedly, white people told me they were “colorblind” and didn’t see skin color. Others said, “I don’t have any problems with ‘your’ people.” Some were simply curious about my law enforcement experiences. By comparison, the intrigue and trust for my “blueness” in the black community wasn’t non-existent, just less. The greatest difference in my interaction between white and black communities was simple. The black community saw my blackness and I saw theirs. Sometimes it was the common bond that allowed us to communicate. Despite the challenges, I gave my best effort to develop relationships with my colleagues and the community alike, regardless of race.

The murder of George Floyd is another addition to the list of atrocities specifically affecting people of color throughout U.S. history. Just knowing that someone who swore to protect committed this horrific act enrages me. The fact that there are still individuals in the same profession, to which I devoted 25 years, who will perceive me as suspicious and dangerous because I’m black is sad and terrifying. Old wounds that took so long to heal have been ripped open — again. This tragedy has made it clear and obvious law enforcement isn’t immune to the white supremacy and systemic racism so deeply rooted in our society.

Some people believe I’m being paranoid, or that white supremacy is a conspiracy theory. My experiences are corroborated by stacks of evidence growing on a daily basis: a twelve year old black boy with a toy gun shot to death in a park; nine black people shot dead in a church by a white supremacist; a black man in his underwear shot to death in his apartment; a black woman shot to death in her apartment; a black man hunted down by white men in broad daylight on a Sunday — our ‘Christian’ nation’s holy day; and the death of a black man killed in broad daylight, in front of bystanders, while three other officers watched Derek Chauvin kneel on the man’s neck for over nine minutes, casually posing for cell phone cameras with his hand in his pocket, while the man used his last breath to plead for his life, and was crushed into the pavement even after EMS arrived at the scene.

They all confirm there is no safe place to be, and no safe thing to do while wearing this uniform of blackness. So, I will not let my love for my brothers and sisters in blue mute my voice about the existence of injustice in the killings of Tamir Rice, Clementa Pinckney, Cynthia Hurd, Susie Jackson, Ethel Lance, Depayne Middleton, Tywanza Sanders, Daniel Simmons, Sharonda Coleman-Singleton, Myra Thompson, Botham Jean, Breonna Taylor, Ahmaud Arbery, and George Floyd.

Critics accuse George Floyd of being a criminal despite the fact he was murdered before he could defend himself. This is America. Citizens are innocent until proven guilty, right? Yet, George Floyd has been posthumously convicted, sentenced, and executed. He received far more punishment than if he would have legitimately been found guilty of counterfeiting money. Although he paid his debt for previous crimes, he continues to be retried. This is not justice and it makes no sense.

Recently, I was with a friend and his 7-year-old grandson. My friend and I were talking when his grandson started asking about George Floyd. He began asking questions and we attempted to answer as simply as possible. I will never forget this or ever be able to say these words aloud without tears. Here’s what he said:

A 7-year-old was trying to put this puzzle together to see a clear picture. But there are missing pieces. One of them is a historical piece. This shapes the context and connects the present to the past. It brings into focus the fact that this has been happening to black Americans for years. And it never mattered if you were a 14-year-old George Stinney, Jr. getting the electric chair or a 39-year-old Malcolm X. You were dangerous. White supremacy denies the picture is distorted. We know better.

Why hasn’t there been change? Who is listening to us? Change hasn’t happened because it’s uncomfortable. So, instead of listening to those who are aching, white America passes the mic to safe black pundits, cranks the volume, and puts them on continuous play. Yes, because they completely agree with white ideologies and they will never require white America to change. They protect the comfort of white America from the difficulty of change while restricting black America from its pleasure. Those who enjoy the most freedom ignore racial disparities while telling people living with those disparities how to feel about them.

How did we get here? How can we affect positive change that restores people without injuring others? The answers are complex and require more space. But, I can tell you this. Trading offense for offense is not an effective method for discipline, punishment, or justice. Our retributive justice system lends power to individuals. The abuse of that power mangles the social, economic, and physical safety of black and brown communities at alarming rates. This has to be acknowledged and changed.

I know some readers turned the page or scrolled down after the second paragraph, but you’re still here. Perhaps, you’ve noticed blind spots in your belief system and recognize how racism and systemic racism influenced those beliefs. You have a desire to change, but you’re wondering what you can do. There’s so much you can do. Educate yourself about cultures and racism by reading books, listening to podcasts, and visiting festivals and museums. Develop genuine and meaningful relationships with people of other races and ethnicities.

Call local politicians to demand accountability and justice for those in authority who abuse their powers. Join peaceful protests and/or donate to social justice advocacy groups.

We can all reduce our devotion to comfort. Let’s step toward being uncomfortable so we can listen to each other and feel pain together. We can’t always relate to the source of another person’s pain, but we all know pain. Let’s start there but not stop there.

Shawn Palmer is a retired Pennsylvania State Trooper and resident of Gettysburg. This column originally appeared in the Gettysburg Times and was contributed by our parent company, Sample Media Group, for publication.

Be the first to comment on "BLACK LIFE: In and Out of the Blue"