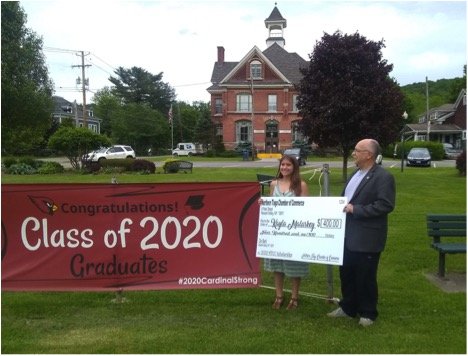 The Northern Tioga Chamber of Commerce is pleased to announce the recipient of this year’s $400 NTCC scholarship is Kayla Malarkey of Newark Valley High School. She has distinguished herself in many areas – scholastically, athletically, and in her community involvement.

In her own words, “I have been the president of the Newark Valley Interact club for three years, student council treasurer for the last two years, a member of the National Honor Society, National Technical Honor Society, and I was previously involved with the Varsity Club. I am a three-season athlete, captain of the varsity volleyball and cheerleading teams, and was able to compete at the NYSPHAA State Championships for track and field last year.”

She continued, “This year I attended the New Visions Health program, through which I was able to explore various health careers. I will be attending Florida Southern College in the fall with a major in marine biology and a minor in Spanish on a pre-med track.”

Kayla competed in the Pentathlon at States. She was also chosen to attend the Rotary Youth Leadership conference last year. She is also this year’s Class of 2020 Salutatorian.