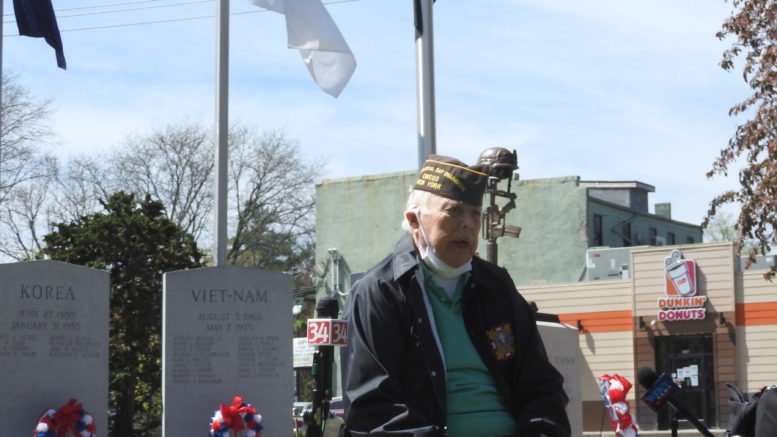 Jim Raftis, Sr., the Tioga County Veterans Memorial Chairman and emcee to services, is interviewed by the Veterans Memorial at the Courthouse Square in Owego last week about the method in which services will be held this year. (Photo by Wendy Post)

Several Tioga County organizations have teamed up to hold a Memorial Day ‘Car’ parade in honor of veterans on Memorial Day, Monday, May 25. Parade assembly will take place on Temple Street in the Village of Owego beginning at 10 a.m. in front of the Owego Police Station, located at 90 Temple St., with the parade kicking off at 10:30 a.m. through downtown Owego.

Area residents are encouraged to join the parade with flags and other patriotic paraphernalia, but will be required to remain in their vehicles due to COVID-19 restrictions and are encouraged to wear facemasks.

There will be no assembly in the Courthouse Square at the Tioga County Veterans Memorial this year due to the COVID-19 crisis and social distancing guidelines will be in effect for the parade. The parade route starts on Temple Street and will proceed south on North Avenue, west on Main Street, South on Park Street, and north on Court Street where it concludes.

Gold Star Mother Barbara Bilbrey will be participating on the broadcast with Raftis, reflecting on the loss of her son Charlie who was killed in the line of duty 11 years ago in Iraq.

The American Legion’s annual chicken BBQ will also take place at 263 Front St. in Owego starting at 11 a.m., with drive-thru or delivery service.