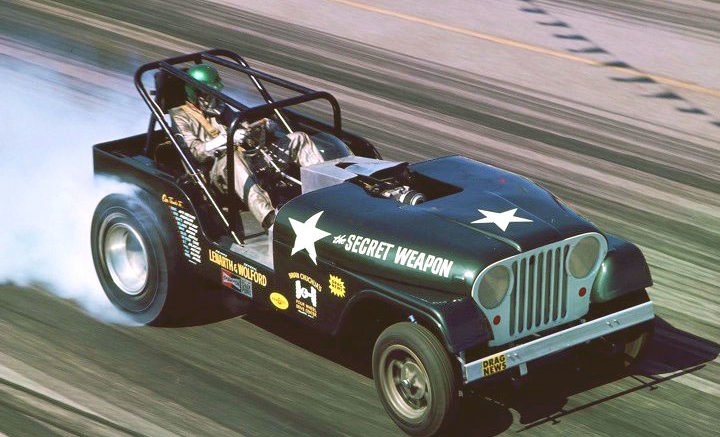 Back in 1966, the Ed Lenarth built and Bob Wolford driven “Secret Weapon” wowed crowds as the one and only nitro Jeep Funny Car in competition. It went a best of 8.03 at 180-MPH but the NHRA quickly outlawed the Jeep from national event competition after a runner-up finish at the ’67 Winternationals. (Photo compliments Speedcityresin.com)

Q: Greg I‘ve always loved those few but fast Jeep funny cars that raced in the mid-1960s. I remember the names Destroyer and Secret Weapon, but would love to hear your memories of these Jeeps that ran back then. Also, was the very first Jeep made by Willys? I know Fiat-Chrysler owns them now. I enjoy your weekly nostalgia columns because you never know what you’ll write about!  Dan L., Ridgecrest, California.

A: Dan, thank you for your comments and before we get to those ferocious Jeep funny cars, let me answer your commercial Jeep question. The first commercial Jeep available to the public arrived in 1945 and was indeed built by Willys-Overland and called the Willys CJ-2A. Willys won a huge military contract in 1941 and trademarked the Jeep name in 1950. Others involved in trying to win the military contract were American Bantam and Ford Motor Company; the latter won a backup contract. 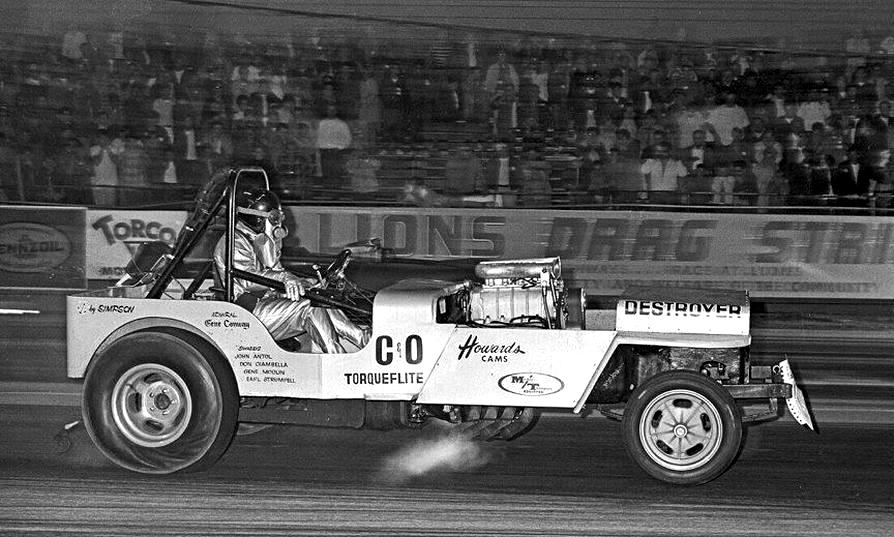 As for how Jeep ended up at Chrysler-Fiat, in 1953, Henry Kaiser, the noted shipbuilder, car manufacturer and founder of the first ever managed health care plan called Kaiser Permanente (still in existence) bought Jeep from Willys-Overland. Then in 1969, AMC bought the Jeep brand and it became the nucleus of its manufacturing business. Following AMC’s demise in 1986, Chrysler bought the brand for $1.1 billion and in 2014, Chrysler joined forces with Fiat and today Jeep continues its strong selling positioning under Fiat-Chrysler ownership.

Now on to the Jeep funny cars that roamed the drag strips from 1966 through 1971. Most important was the era itself, as back in 1966 I got to see my first ever nitro funny car event at Atco Dragway in Berlin, New Jersey. It was a Wednesday night event and over 20,000 fans packed the place. The 10,000 capacity stands were overflowing and the standing room only fans literally knocked down the fences at half-track, delaying the second round of action. The winner that night was Cecil Yother in the Melrose Missile topless Plymouth Satellite nitro injected 426 Hemi, defeating The Gate City Motor Company Ronnie Sox driven Plymouth Satellite with similar power. The feature show was eight “era-correct” funny cars, both steel and fiberglass, and by era correct I mean if it was a Chevy II, Plymouth Satellite or Ford Mustang, it looked exactly like the street car and not an aerodynamic, ultra-modern spaceship carbon fiber creation with Chevy Camaro, Dodge Charger or Ford Mustang decals. 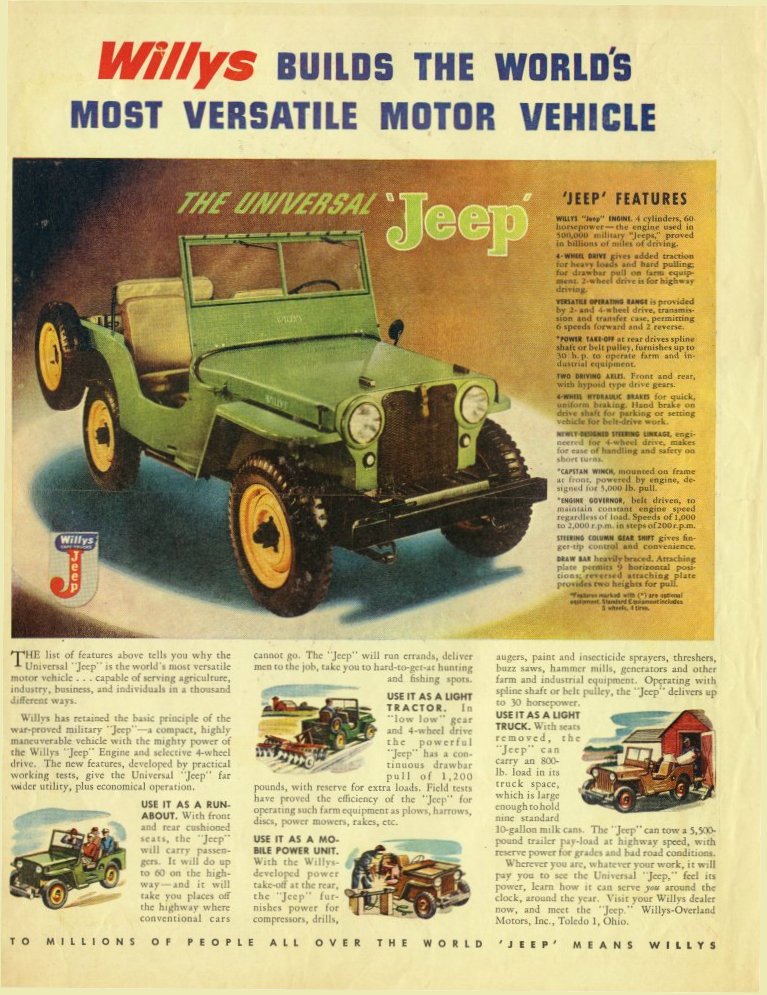 The first Jeep built for the consumer was this 1945 CJ-2A version built by Willys-Overland. (Compliments Fiat-Chrysler)

Two of the three funny car Jeeps I remember well were built by the Godfather of Jeep funny cars, namely Ed Lenarth, from Long Beach, Calif., who also drove his creations when necessary. His first Jeep funny car appeared in 1966 and was called “Secret Weapon.” Along with driver Roger Wolford, Lenarth helped kick off a tumultuous yet so exciting era of early day funny car racing. Back then, “run watcha’ brung” ruled.

The second and third Jeeps most notable were the Gene “Conway” Ciambella “Destroyer” and the Lenarth and Cachuna “Holy Toledo.” These Jeeps, not surprisingly, were all west coast funny cars where the class evolved from altered, wheelbase, full-bodied cars, into fiberglass, flip top body creations. Back then the southern California races attracted sometimes 40-plus cars to qualify for eight and 16-car events and it seemed every day of the week, there was a nitro funny car race going on somewhere. Personally, I couldn’t wait to get my Drag News and National Dragster newspapers to catch up on the action.

Ciambella’s “Destroyer” deserves special note, as it was known for its closer to real Jeep looks and scoring numerous non-NHRA national event match race and open competition wins. The “Destroyer” won against the “best of the west” funny cars and was built in later 1966 with a homemade chassis and Hemi nitro power. 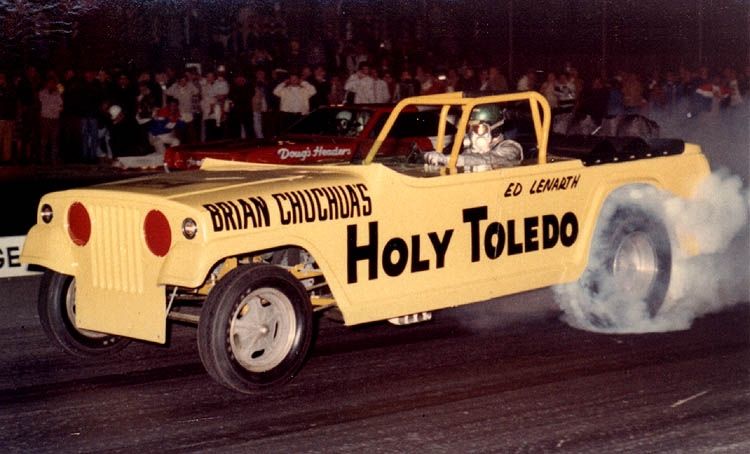 Although Jeep funny cars were outlawed by NHRA in 1967, the “Holy Toledo” Hemi powered nitro funny car competed in open competition west coast events through 1971, and went a best of 7.12 at 200-MPH according to DragList.com. (DragList.com photo)

The biggest problem with the Jeep funny cars is that they did not have a car style body that enclosed the driver. They looked more like a nasty handling fuel altered or a roadster than a funny car, and were brutally quick when they hooked up. They were so fast that the major car manufacturers involved in funny car sponsorship put pressure on the NHRA to have the Jeep declassified as a funny car even though “funny car” was in its birth stages.

I’ll admit they were more an altered than a funny car, and so did the NHRA. Following the 1967 Winternationals at Pomona, Calif., the only two Jeep nitro funny cars in existence, Ciambella’s “Destroyer” and Lenarth and Wolford’s “Secret Weapon,” scored semi-final and runner-up performances, respectively, the latter losing to winner Dyno Don Nicholson’s Mercury Comet funny car. That was the final straw for NHRA, as the Jeep funny car was outlawed from any further national event competition and ruled an altered/roadster instead.

Following the decision, Jeeps pretty much had to rely on match races and open competition funny car events ranging from eight-car up to 32-car qualified events for income (where they did quite well).

Even in the face of being outlawed, Lenarth built the “Holy Toledo” in 1968 with state of the art pieces including a Dick Fletcher funny car chassis. He and partner Brain Chuchua, previously a Jeep funny car sponsor, successfully debuted the new and all-yellow “Holy Toledo” to the many open competition west coast races with Lenarth behind the wheel and a 392 nitro Hemi under the hood. The Jeep won several open competition races out west, and ran a career best of 7.12 at 200-MPH at Lions in an eight car qualified show.

And with the COVID-19 finding many of us in stay at home mode, check out Speedcityresin.com for available models of these fabulous Jeep funny cars and other drag racing kits.

(Greg Zyla is a syndicated auto columnist who welcomes reader questions on auto nostalgia, collector cars and motorsports at greg@gregzyla.com).

Be the first to comment on "Collector Car Corner – Those wild, incredible Jeep funny cars and the first ever consumer Jeep"