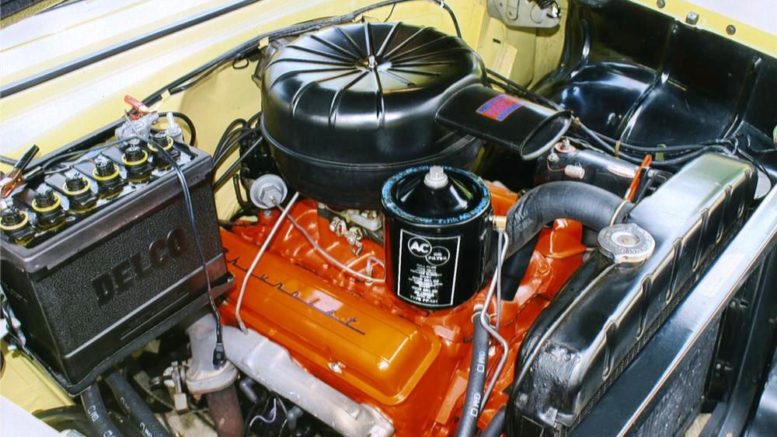 This photo of the 265-V8 in 1955 shows the optional canister style AC oil filter mounted at the front of the engine in gloss black paint. (Compliments Barrett-Jackson Auctions)

Q: Greg I bought a 1955 Chevy Bel Air, 2-door with 56,000 original miles. It has the 265-V8 and an automatic transmission and a two-barrel carburetor. It also has an oil filter kit which I’m not sure if it was a dealer installed or by someone else.

If I put five quarts of oil in, the dipstick will show one quart overfill. Did the 265-V8 back then that came without an oil filter only have a four-quart oil pan?

I don’t want to pull the intake to see if that little breather we called a “beer can” (ventilator) is in place or not as it leads to the road draft tube.

Do you have any ideas why I’m getting oil out of the road draft tube? The engine looks and runs just like it came off the showroom floor and I hope you have some ideas. Thanks much, William (Bill) J. Walker, Mt. Pleasant, Michigan.

A: Bill, it’s clear you already know about the dealer installed oil filter option on the 1955 265-V8, the latter the first ever Chevy overhead valve V8.

The 1955 Chevrolet was the first year of the 265-cubic inch overhead valve V8, which turned into the most popular V8 engine ever built and still exists to this day in modern form. (Chevrolet advertisement)

As you found out, the only Achilles heel of the 1955 V8 was the oiling design, as the base design did not come with an external oil filter canister. This was cleared up with a dealer-installed option called an AC external oil filter, which was added to your car somewhere along the way by either a Chevy dealer or independent mechanic. For 1956, the oil system was revised and included the oil filter canister. 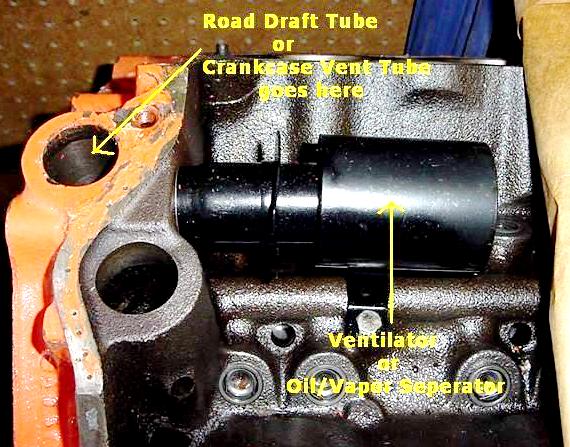 The optional oil filter kit featured a bracket that went under the thermostat housing with longer bolts and gaskets on both sides to seal it to the intake and the thermostat housing. The oil came from a tiny fitting on the front of the block above the timing cover, through a small copper oil line into the oil filter and then the filtered oil would run back into a fitting in the intake and drain back into the oil galley. One of the V8 pictures I attached shows the optional canister in place.

So with all this said and according to the info you sent, I’m afraid you’re going to have to pull the intake manifold and check that little “beer can” breather as that could be where your problem lies. Oil could be coming into the road draft tube via a misaligned or damaged breather as my top guess. (See photo)

As for the oil pan, you can’t tell by looking at it if it is a 4.5-quart refill unit or a 5-quart pan. The baby boomer Chevy mechanics I spoke to who installed the optional oil filter kits back then never changed the oil pan, as that would have been a major job. It also would have necessitated a longer dipstick to matchup with the deeper dimension pan if one existed. So, I assume like you that if you put an external oil filter kit on, you could put five quarts in and not get much of an overfill reading on the dipstick, but we’d both be wrong. It is noted that the high mounted oil filter did not hold one quart, or it drained back into the oil pan when the car sat for any length of time. 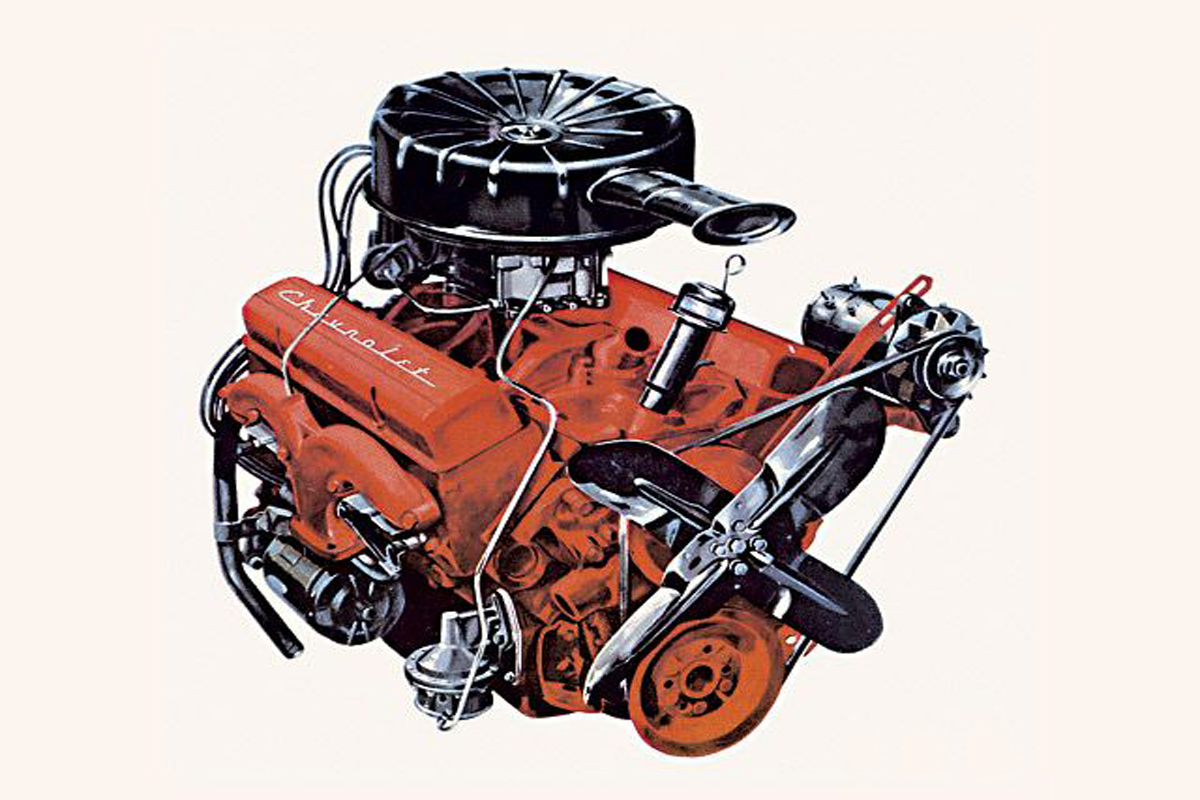 The 1955 Chevrolet 265 V8 did not come with an external canister oil filter. On this artwork, you can see the black road draft tube at the very left of the 265-V8. (Chevrolet artwork)

If you don’t find the leak when you pull the intake manifold and the “beer can” is okay, then you might want to double check the several little oil fittings, including the one near the timing cover or the fitting on the intake. Oil could escape there, not hit anything that would burn it and then end up on the road draft tube assembly along its journey (although it’s probably a long shot and not likely).

In ending, just as we were ready to go to press, Bill gave me a buzz after I left a message and it was indeed the “beer can” breather / ventilator as the culprit. It had a few little holes in it allowing oil to get it and then into the road draft tube, resulting in the drip. Bill resized the breather as it was a little too long, meaning someone was in there before, then brazed up the little holes, cleaned everything up, put on the intake with new gaskets and all is well.

Thanks for the handwritten letter Bill and it was a pleasure chatting on the phone. Good luck with your’55 Chevy Bel Air.