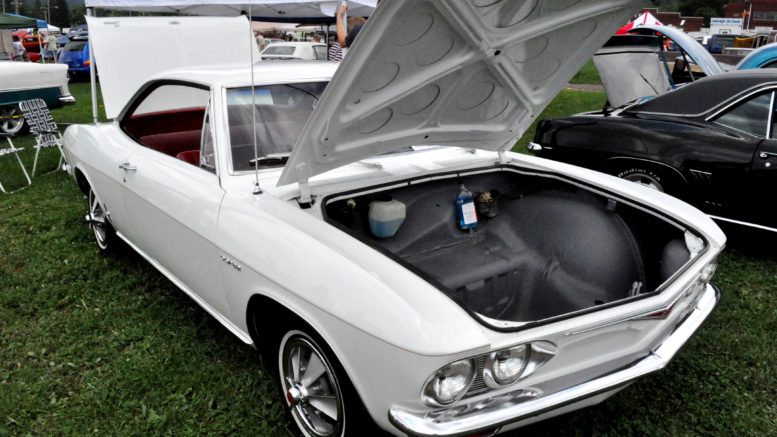 This beautifully restored 1965-1966 era Corvair Corsa hardtop coupe appeared at the Bloomsburg Nationals car show in August of 2018. Inside and out, it is a great representation of a preserved and cared for Corvair. (Greg Zyla Photo)

Q: Greg can you give us some info on the Chevrolet Corvair, especially those you came across during your racing days in the 1960 era? Also, your opinion of the Corvair as a collectible car is also appreciated. Thanks and I see your columns in the Towanda Daily Review Sunday newspaper. Sincerely, Don from Wysox, Pa.

The enhanced aerodynamic body of the Corvairs was popular with nitro funny car teams in the 1966 to 1969 era. Shown here is the Doug Thorley “Doug’s Headers” Corvair that won the 1967 U.S Nationals running a Chevy big block engine instead of the popular MOPAR Hemi engines. It ran a 7.69 in the quarter-mile that day. (Compliments Bill Pratt’s DragList.com)

A: Don, as for racing, the Corvair was very popular in the nitro funny car drag racing class in the mid to late 1960s. These Corvairs, however, were in no way similar to the road car and were basically fiberglass bodies on top of specialized 120- to 125-inch wheelbase funny car tube chassis creations. It was a highly specialized chassis with room for the driver only, and the streamlined Corvair bodies were popular with many of the fastest teams of the day.

In my opinion there were two “extra special” and very fast Corvair funny car teams from 1966 to 1969. The “Seaton’s Shaker” nitro funny car Corvairs owned by GM-connected Pete Seaton was one of the most popular and successful teams. Seaton not surprisingly utilized actual Chevy big block engines that took on the more durable and usually faster Hemi engine teams of the day. 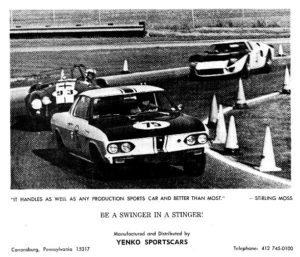 Here’s an advertisement for Don Yenko’s Corvair Stinger with a quote from Sir Sterling Moss, who passed away April 12, 2020. The Stinger Corvairs were built in 1965 to 1967 at Yenko’s dealership in Canonsburg, Pa. You can catch a Corvair Stinger segment online at Jay Leno’s Garage as Leno currently owns a Stinger. (Compliments Don Yenko collection)

Driven by noted driver Terry Hedrick, the Shaker won many AHRA national events and match races going as quick as 7.34 at 194 MPH in 1968. Hedrick is also known as the first driver of a Corvair funny car to exceed 200-MPH. Prior driver Delmar Heinelt, who lost his life in a Mustang funny car crash in 1967, was also a big part of the Seaton’s Shaker fame early on driving Seaton’s ill-handling, all steel Chevelle and his first Corvair funny car.

Also sharing top Corvair honors in both popularity and quickness was the outstanding Doug Thorley “Doug’s Headers” Corvair funny car, another of the winning funny car teams. Thorley won the 1967 U.S. Nationals with a Chevy powered run of 7.67 seconds at 190-plus while his prior Chevy II was also a legendary car but pre-dated the real fiberglass funny car era. Notable as to the first Corvair funny car to go 200-MPH was an unofficial 200-MPH run at Lions Drag Strip in late 1967.

Instead of trying to go straight and hanging on for dear life in the nitro funny cars, there were some Corvairs that made a mark in SCCA Road Racing. 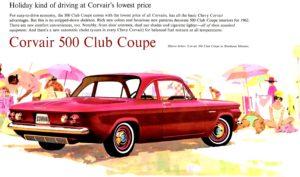 Advertisement for the Chevrolet Corvair that had a 10-year production run from 1960 to 1969. (Compliments Chevrolet)

On the SCCA tracks where “real” Corvairs raced turning left and right, Don Yenko built special performance Corvairs at his dealership in Canonsburg, Pa., called Yenko Stingers. Based on the Corsa and Monza trims, these Yenko Stingers won the D/Production central region title in 1966 and were available in four stages of dress, specifically 160, 190, 220 and 240 horsepower versions. All were derived from Corvair’s base 164 cubic-inch flat-six cylinder and a total of 185 Stingers were built in 1965 through 1967. Many aren’t aware that it was the Corvair Stinger that Yenko built first prior to his famous COPO 427 Chevelle, Camaro and Nova Yenko muscle cars he is best known for.

Noteworthy is television and movie star Tim Allen (The Santa Clause, Home Improvement, Last Man Standing) who owned and raced a Yenko Stinger prior to selling it in 2009. In addition to the Yenko racing wins, there were other Corvairs in road racing competition although to my knowledge, Yenko’s was by far most successful. Still, most of the Corvair racing attention went to those 200-MPH nitro funny car Corvairs.

To answer your question on Corvair collectability, and following author/politician Ralph Nader’s criticism in his 1965 book “Unsafe At Any Speed” about the 1960 to 1963 Corvairs, they are still popular with car enthusiasts. Today, Corvairs are reasonably priced and an excellent choice for entry into the world of car collecting.

I’ve always liked Corvairs because of their unique rear-engine, rear-drive technology. Although they’ll never be top value cars, models like the Monza Spyder convertible or any trim Corvair coupe or four-door are priced to buy. I see many nice Corvairs for sale today in decent to good shape for less than $8,000.

Also very interesting are the Corvair wagons, vans and trucks. The Lakewood Station Wagon and Greenbrier Sports Wagon passenger van are always popular at the area car shows. Notable too is the Greenbrier pickup that features a side-opening door that doubles as a ramp to easily load cargo. These Corvairs have escalated in price over and above the Corvair sedans and coupes.

Hope all this info helps Don and thanks for being a loyal reader.

Be the first to comment on "Collector Car Corner – Chevrolet Corvair: on the street and at the race track"