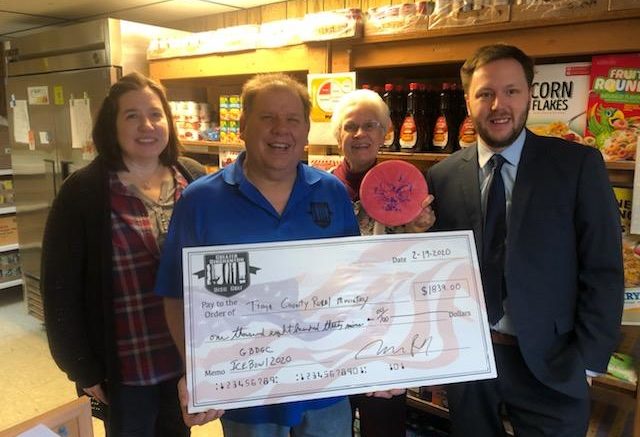 Roughly 40 players braved subfreezing temperatures to participate in the Greater Binghamton Disc Golf Club’s first annual Ice Bowl on the morning of Wednesday, Feb. 19 at the Campville Commons. Along with competing for prizes, Ice Bowl players helped generate $1,909 for Tioga County Rural Ministry and 196 pounds of food that was donated to a local food bank.

“The day started off -4 degrees and it got to a high of 15 degrees by the end of the round,” said Rick Powell, vice-president for the Greater Binghamton Disc Golf Club, adding, “It was a cold, beautiful sunny day.”

Competitors played one round consisting of 24 holes with par set at 80. Winner Eric Trippany claimed first place with a score of 66, or 14 under par.

Disc golf, which uses a slightly smaller and heavier frisbee instead of golf clubs and golf balls, is similar to golf in terms of procedure, pace and psychology, Powell said. Instead of a cup, players must toss their disc into a basket or within target chains; and much like golf, players are tracked in how many attempts it takes. The Greater Binghamton Disc Golf Club, which is a registered non-profit, has roughly 45 members and competes year round.

“Who won the Ice Bowl was not as important as everyone having fun. Disc golf is a lot of fun, easy to get into but hard to master and relatively inexpensive to play,” Powell said.

Playing during the winter adds an extra layer of challenges, as the ice on the hilly terrain at the Campville Commons course caused one player’s disc to roll back further from where they started in some cases.

“One woman had a shot all uphill and her third shot ended up going all the way back to the tee,” Powell said.

Players came from throughout Pennsylvania and New York and even as far as Connecticut to participate for the Ice Bowl.

“This is the first time we have ever done anything like this, we are only a five-year-old club. We built this course (at Campville Commons) about three years ago,” Powell said.

While the Ice Bowl has been in existence for decades nationally, Powell said that the club needed some time to get its footing before attempting their own local Ice Bowl.

“Now that we have, we definitely are going to do this as an annual thing. Now that we have our own course and know that there is support for it we are planning on doing this for many years to come,” Powell added.

In an effort to get more people interested locally in the sport, Powell said that he is about to start a six-week clinic for disc golf beginners at the Tioga County Boys and Girls Club. Starting March 16 and running on Monday, the program will cost $10.