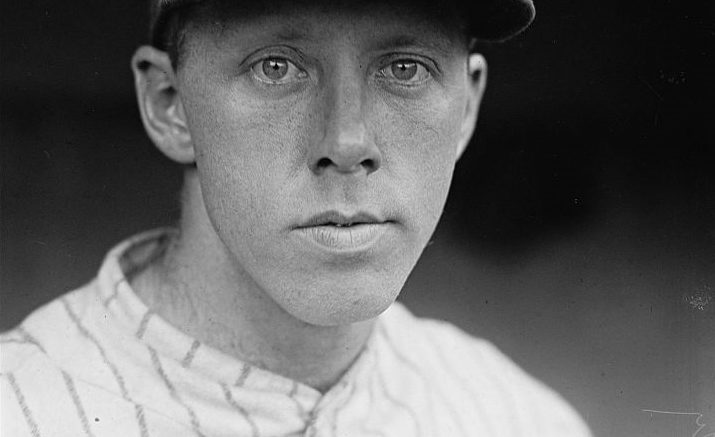 Spencer Armstrong Pumpelly was a professional baseball player and successful businessman born in Owego, N.Y. on April 11, 1893. Spencer was the second child of Gurdon Hewitt Pumpelly and Kiamisia Birdsall Armstrong Pumpelly. Gurdon was the son of Frederick Henry Pumpelly who was the son of James Pumpelly. James was a hugely important and successful figure in the early days of Owego and Tioga County. James was involved in a variety of businesses and cultural ventures and amassed a substantial amount of wealth. That wealth and business acumen trickled down to several of his offspring including lifelong Owegans – Spencer, his brother Harold, and his father Gurdon, who would succeed in tobacco farming and cigar manufacturing.

Since the days of Spencer’s great uncle, George Pumpelly, Owego had been considered a ‘Yale’ town. This claim was made due to the Pumpelly family patronage to that esteemed Ivy University. This in turn paved the way for several of the wealthy up and coming youths of the area to attend that esteemed school, Spencer was no exception.

Spencer, like his star athlete older brother Harold, would attend the Hotchkiss prep school in Lakeville, Connecticut before attending Yale. Desiring to play baseball, in 1913 Spencer finally reached Yale as a 20-year-old freshmen but by rule, freshmen were unable to play on the varsity baseball team.

As a sophomore, in the spring of 1915, Spencer made his pitching debut at Yale. He performed quite well in his injury-shortened season, compiling a 4-2 pitching record. He even was able to pitch in front of his hometown fans as they had traveled the 28 miles from Owego to Ithaca to watch Cornell host and beat Yale in a 1-0 game. Spencer would never pitch again for Yale after the 1915 season after being ruled ineligible due to receiving some room and board accommodations while playing summer ball in Long Island, N.Y. (Bevis).

Spencer was apparently a respected and socially well-liked student at Yale. Leading up to his graduation he was voted “Most Popular” and “Most to Be Admired” by his classmates (K. Kelly). Interestingly, in both of those contests he had beaten out a fellow classmate and Yale baseball teammate, Prescott Sheldon Bush. Prescott Bush of course would become a wealthy businessman, banker, U.S. Senator from Connecticut and most notably the father of POTUS 41, George Herbert Walker Bush and the grandfather of POTUS 43, George Walker Bush. As best I can tell, Spencer, his brother Harold, and Prescott Bush all played on the Yale Varsity Baseball Team in 1915.

One of the oddest things that may have been recorded about Spencer A. Pumpelly was the day he decided to be absent from the Yale campus during “Tap Day” or frat selection day-in the spring of 1916. Tap Day was and still is a hollowed, ceremonial day on campus when the Yale fraternities and societies would “tap” (select) would be senior classmen nominees for admission to their respective fraternities. The word on campus was that Spencer was a likely selection for the highly prestigious Skull and Bones secret society. (Yale’s Skull and Bones is elite, claiming members of substantial notoriety-to include three U.S. Presidents.)

Spencer’s absence from this event was unheard of and caused quite a stir on campus. Even Spencer’s older brother Harold A. Pumpelly a Skull and Bones member, all-American Yale football star, and notable graduate was on campus that day. Harold had gone out, without luck, to find Spencer and bring him back to campus. It was later stated that Spencer had decided to simply go for a ride in his car (Richards). I have not been able to determine what actually happened that day, but at the very least it would appear that Spencer was not interested in joining any secret societies or fraternities and decided it was best to just be absent from the scene. Little did they know that would be the last Yale Tap Day for three years, as World War I was already underway in Europe and the U.S. would soon be mobilizing.

After Yale graduation, Spencer and many of his classmates served in the First World War – Spencer in Naval Intelligence; brother Harold as a Naval Aviator; and Prescott Bush in intelligence and field artillery with the American Expeditionary Forces. Before and after the war Spencer continued to play semi-pro baseball in the northeast. In 1925 he signed with the World Champion Washington Senators of the American League, so at age 32 he had finally made it to the major leagues.

Speculation was made to Spencer’s signing; people wondered what his pitching credentials were. In June, Spencer pitched well in an exhibition game against the Pirates and the Washington Post had printed some positive comments about Spencer. Paraphrasing that piece: Senator’s manager Bucky Harris liked what he saw in Pumpelly and was hopeful for his success on the mound. On July 11, 1925 Spencer would make his professional baseball debut pitching in a game against the St. Louis Browns. This would be his first and only big league appearance in a game. He entered in the bottom of the sixth inning and pitched one inning giving up one homerun and a walk. He was pinch hit for in the top of the seventh inning so unfortunately he never got a chance to swing the bat. The Senators released him the next day.

The Senators went on to win the AL pennant again in 1925 only to lose to the Pirates in the World Series. The notion has been presented that Spencer would had to have known somebody with power in the baseball world or performed amazingly in his low profile semi pro years to sign with a pro team. In that it is rather unusual for a virtually untried 32-year-old baseball pitcher to sign with a World Champion professional team loaded with pitchers that year like Hall of Famers Walter Johnson, and Stan Coveleski. In addition, Spencer had not played baseball legitimately, or consistently for eight years. I would like to believe that Spencer tore it up in the semi pro leagues. We will never know due to the fact that there was little if any record keeping in those types of unaffiliated leagues, unless they were playing an exhibition game against a professional franchise team.

The following story might provide some insight to Spencer’s personality. In the 1930’s Spencer was out hunting close to Waits Road in the Town of Owego near the Pennsylvania border when he happened upon a rough and roofless hand hewn log cabin. The cabin had been built by a man named Bill White in 1815. As the story goes, Spencer was able to purchase the cabin for $25. He then removed it piece by piece and completely rebuilt it adding a roof, porch, and chimney. The renewed cabin was relocated several miles to the north on the family property surrounding Pumpelly Creek, which is tributary of the Susquehanna River. It took Spencer four years to complete this task and the cabin still stands there today. This information was found as I came across a title-less article on the Internet from March 1997, it tells the story of this cabin and that it was referred to as ‘Pumpelly’s Cabin’.

Before and after his professional debut Spencer called Owego home. He carried on with his brother Harold in the family tobacco business in Owego as the Pumpelly-Howe Tobacco Company. Through the 1920’s the Pumpellys were “pioneers” in the mechanical cigar making process, employing dozens of workers in the village of Owego (U.S. Tobacco). For the rest of his life, Spencer continued to live with Harold and his family in the beautiful home that his parents had built on 44 Front St. in Owego. Owegans know this as the Pumpelly House Estates, Bed and Breakfast and Events Center. It is a beautiful structure and grounds and one of the showpieces of Owego that overlooks the mighty Susquehanna River.

Spencer’s life would appear to reflect qualities of: duty, ingenuity, physical strength, perseverance, and not always following the crowd. Can you imagine Spencer and Harold playing their games and practicing their sports in the front yard of their Front Street home? Undoubtedly, they were both exceptional athletes – Spencer working on his curveball and changeup and Harold catching for him; both taking batting practice off of each other. Playing some pickup games with their neighborhood friends. Swinging hard for the imaginary fences, which might have been the river or the street, and certainly throwing and kicking a football around as well. Just some Owego kids dreaming of adventure and maybe playing in the big leagues someday. Exceptional athletes and exceptional men.

Author’s Note: As I researched Spencer A. Pumpelly and his one inning professional pitching career, I could not help but think of and compare him Dr. Archibald ‘Moonlight’ Graham. Graham spent all but one inning of a seven-year baseball career in the minors. In 1905 he was traded from the Binghamton Bingoes to the New York Giants. On June 29, 1905 the Giants were visiting the Brooklyn Superbas (Dodgers). Graham entered the game playing in right field in the bottom of the ninth inning. This would be his first and only major league appearance. No balls were hit to him and he did not get to make a plate appearance. Graham was a character in the 1989 seminal baseball movie ‘Field of Dreams.” In the movie, Graham was portrayed by Burt Lancaster, this would be Lancaster’s final film role.

1 Comment on "Spencer A. Pumpelly: Owego’s Star of the Diamond"