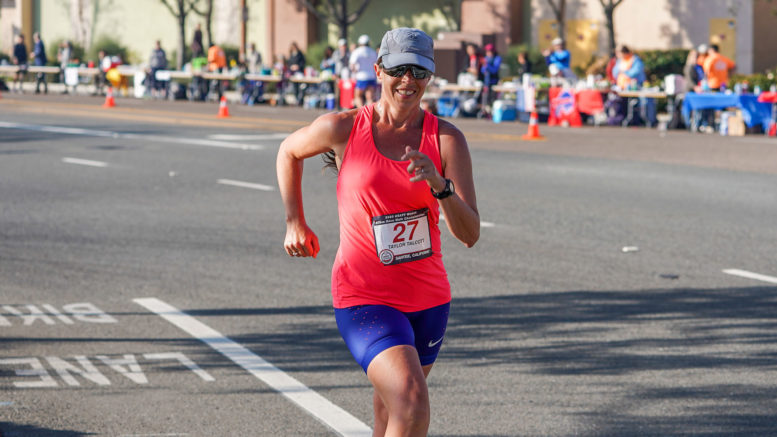 Owego couple Dave and Erin Talcott recently competed in Santee, Calif. at the Race Walk 50 Kilometer US Olympic Trials and US National Championships and brought home the bling. Dave Talcott, 59, is now one of the oldest athletes to ever qualify for and compete in the Olympic Trials in any event, proving that age is just a number.

Posting his fastest time in a number of years, his 5:06:52 was good for 7th place. Dave’s strength and mental fortitude showed through as he moved up positions late in the race.

In a 50 Kilometer race (31.1 miles, five miles longer than a marathon), the race often sees competitors slow near the end and even at times drop out. Dave remained strong and passed competitors in the final three miles of the race. He continues to prove he is one of the top masters race walkers in the world in his age group.

Turning 60 in April, he is looking forward to competing at the World Masters Track and Field Championships in Toronto, Canada this summer.

Erin, as well as other female race walkers throughout the world, is currently fighting for inclusion in this year’s Tokyo Olympics. All that aside, Erin walked her fastest time since 2017, clocking a time of 4:47:01. For reference that would’ve brought her through a marathon in a time of 4:02, while walking. Her effort was good for 2nd place.

The race also served as the trials race for the World Team Championships of Race Walking in Minsk, Belarus. Erin’s place and time qualified her for Team USA and she will be heading to Minsk to compete at the beginning of May.

Dave and Erin can often be seen training on the roads in Owego. They credit the hills and winds on helping them get strong and tough.

This year Dave and Erin will again be hosting their race, Not Just a Walk in the Park, in September. It’s a Centurion race where the goal is to walk 100 miles in under 24 hours.

They also are hosting a 50-mile Kennedy March where the goal is to walk 50 miles in under 12 hours. A 100-kilometer run will also be contested. These events are open to anyone wanting to give endurance events a try. Information can be found by searching for ‘Not Just a Walk in the Park’ on Facebook or searching raceroster.com for the event.