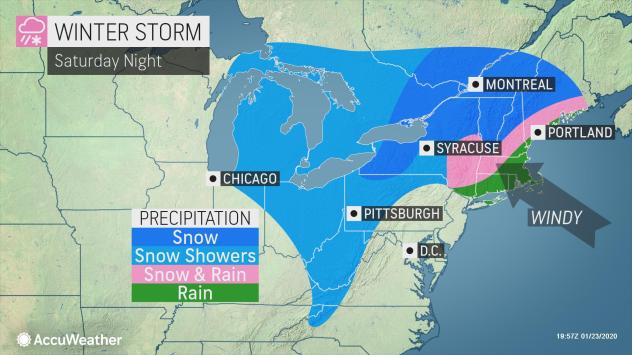 A storm trekking across the country toward the Northeast will arrive this weekend, but the latest forecast indicates a shift in the amount of snow it will produce – and where the snow will fall, according to accuweather.com.

They explained that even though the storm slated for the Northeast continues to trend warmer, snow is still forecast to bury the northern tier and blanket parts of the central Appalachians, while pockets of ice can pose a travel risk.

A storm from the Midwest will strengthen and track far enough to the north to have a significant influence on the primary form of precipitation in the Northeast.

“We are getting a strong indication now that a southerly wind will get going at most levels of the atmosphere as the storm moves in,” AccuWeather Senior Storm Warning Meteorologist Brian Wimer reported.

“That southerly flow should be enough to pull warmer air in from the ocean and the Gulf of Mexico and effectively avoid snow altogether in Washington, D.C., Baltimore, Philadelphia, New York City and Boston,” Wimer added.

North and west of Interstate 95, all or mostly rain is likely from northern Virginia to central New England with the storm. A few hours of a wintry mix can occur early on.

Despite the primary form of precipitation being rain in these areas 100 miles inland of the coast, a cold ground can cause a layer of black ice to form. In this situation, the black ice would be more common in areas that are shaded from the sun, such as the north side of buildings, gaps in the mountains and wooded locations. Because of the patchy nature of the ice, some motorists and pedestrians may think the entire stretch of roads or sidewalks are just wet. The ground can be icy even though car or home thermometers show temperatures above freezing.

Adding to the spotty black ice risk will be the potential for locally dense fog.

There will be areas in the Northeast where shoveling and plowing operations are needed.

Locations where enough snow is likely to fall and accumulate with the storm will extend from the mountains of northern West Virginia and western Pennsylvania to the northern tier of Pennsylvania, western, central and northern New York state and northwestern New England.

From 6-10 inches of snow is forecast from northern New York state to the northern parts of Vermont and New Hampshire as well as part of northwestern Maine. In this swath an AccuWeather Local StormMax™ of 14 inches is anticipated.

Areas from western to east-central New York state, southern Vermont, central New Hampshire and central Maine can expect a 3- to 6- inch snowfall. A total of 1 to 3 inches of snow is forecast from the northern West Virginia Mountains to the mountains of western Pennsylvania, the southern tier of New York state and in a narrow zone across central New England.

The combination of heavy rain and gusty winds for a time can lead to travel delays in the I-95 corridor. Enough rain can fall along the coast to cause urban flooding.

As the center of the storm from the Midwest moves in, colder air will rotate southeastward from later Saturday to Sunday.

Temperatures are forecast to climb into the 40s in Boston, New York City and Philadelphia and near 50 in Washington, D.C., on Sunday. As a result, rain will subside and dry air will sweep in across the swath from much of Virginia to southeastern New England.