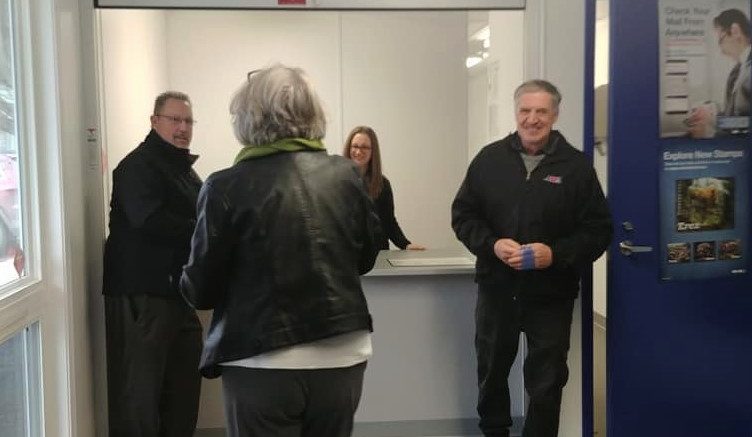 The community of Richford, N.Y. had good reason to celebrate on Jan. 13. The grand opening of their new U.S. Post Office, located on Route 38, was made official after six-plus years in-the-making.

“We are delighted now,” remarked Town Supervisor, Charles Davis; however, he added that getting to this point was “frustrating, that it got to this level.”

Davis explained that it was difficult to get answers as to when the new post office would open once it was completed last summer, yet with the help of residents taking action via a formal complaint process with the USPS, the long-awaited Richford Post Office is finally a reality.

Davis commented, “Thanks to everyone who helped get the ball rolling on this.”

Davis also noted that the final choice for the construction spot was a win, too, and not only convenient for residents, but it also maintains a “community partner” relationship with the Mirabito Company, which owns a gas station nearby and the property where the new post office was built.

Davis explained that the original post office closed in 2013 due to environmental reasons. Operations were then moved to neighboring Berkshire for some time before another solution, which utilized business space within the Red Rooster Diner property, allowed residents the ability to purchase stamps and send and receive packages, as well as retrieve their mail via outside boxes. The contract there, however, was not renewed.

During the transition period when construction of the new post office began in early 2019, Davis said that operations moved back to Berkshire.

Construction activity commenced in March and by Aug. 1, Davis said it appeared the building was “pretty well done.”

When the post office did not open, residents began to question why, as did Davis. Davis said he was informed that the delay was due to personnel issues.

Fast-forward several months later, and a resident brought up filing a formal complaint with the United States Postal Service. Davis and several other residents followed that lead last month, and correspondence was also sent off to the offices of Congressman Reed and Senator Schumer.

Soon thereafter, it was announced that the post office would open in January.

After a “soft opening” the first full week of January, P.O. boxes were back in business on the grand opening day.

Richford Post Office hours are Monday through Saturday, 7:30 to 11:30 a.m., and access to post office boxes is available after hours. Parking is open to six spots.

“It’s not as big as we’d like,” Davis said, adding, “But we’re happy with the end result.”

Davis mentioned, too, that a temporary Postmistress is on-site and that a full-time employee is in training.

Davis explained, “Richford is considered a bedroom community since many of our residents travel to Ithaca or Cortland to work,” and went on to say that having an operational post office is critical to everyone’s daily routine, plus it helps keep business local.

For more information about Richford, visit the Facebook page, “Forgotten Northern Tioga County New York,” or find the Town of Richford at www.richfordny.com.