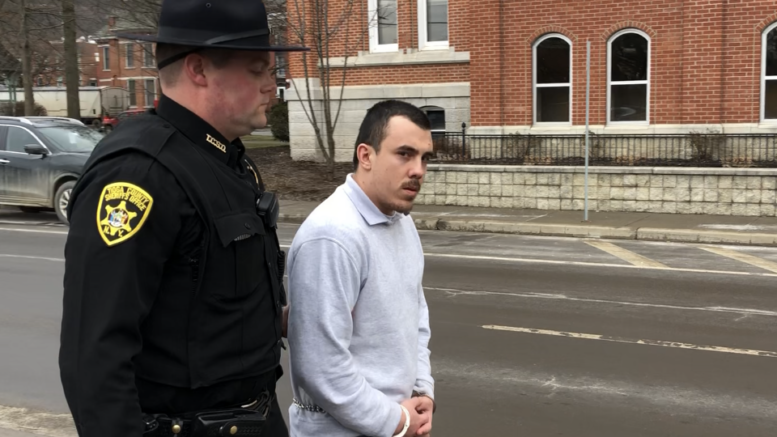 An officer escorts Cody Franciscovich into a hearing on Friday that postponed his trial date to allow time for arguments in the case. Franciscovich has been charged in connection with his young daughter’s death in June of last year. (Photo by Benjamin Klein)

On Friday, Cody Franciscovich, the father of “Baby Ruby” and charged in relation to her death last June, had his trial date, which was scheduled for February, indefinitely postponed following a pre-trial hearing to give his lawyers time to submit a written argument as to why some of the evidence collected by police against him should be suppressed. Franciscovich appeared in handcuffs at the Tioga County Courthouse in Owego for Friday’s hearing.

The hearing, which included testimony of multiple state troopers involved in the case, was so that the defense could examine the legality and circumstance of the evidence against Franciscovich.

Due to the length of his interrogation and other factors, Judge Gerald Keene decided to reserve his judgment and instead give defense lawyers two weeks to submit a written argument, and then the prosecution two weeks after that to respond.

During the hearing it was established that Franciscovich had stated he was high on acid at the time of his arrest, and made multiple unprompted self-incriminating statements.

Steven Ayers, trooper for the New York State Police, testified that he heard Franciscovich say, “I deserve death, this is worse than death,” and “I wasn’t even trying to be a bad person.”

It was also established during the hearing that Franciscovich was not immediately mirandized at the time of his arrest.

Franciscovich was indicted for two counts of second-degree murder in this case.

We will have the full story in next Sunday’s print edition of The Owego Pennysaver Press.