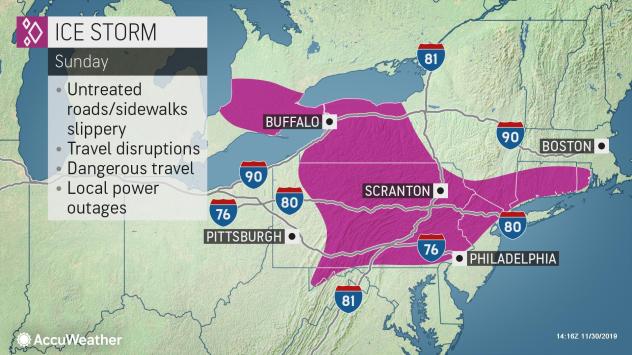 Pictured is a scenario posted by accuweather.com, offering a snapshot of what conditions we might to wake up to Sunday morning.

A dangerous ice storm is in the making across part of the northeastern United States and will occur during a busy travel period for the tail end of the Thanksgiving holiday weekend.

The impending ice storm is part of a complex, double-barreled system that will bring a foot of snow to parts of the Northeast from Sunday to Monday.

A shallow layer of cold air and cold ground will create conditions that will allow a building up of ice, mainly in the form of freezing rain in some locations.

In some locations the ice storm may begin as snow and sleet. While either of the two can allow for some traction by foot or vehicle, several hours of freezing rain will lead to a dangerous and damaging glaze of ice.

This ice buildup will begin Saturday night from northeastern West Virginia and western Maryland, to western and central Pennsylvania, to western New York state, and part of southern Ontario.

“The worst of the ice buildup, which could range from 0.25 to 0.50 of an inch of freezing rain, is likely over south-central and central Pennsylvania and western Maryland,” according to AccuWeather Senior Meteorologist Rob Miller.

In these areas and other locations farther to the east, the ice buildup can last 12 hours or more.

“A glaze of ice of this magnitude is likely to bring down trees and power lines, which can block roads and knock out power for several days in some locations,” Miller said.

Other pockets where up to 0.25 of an inch of freezing rain can fall include east-central Pennsylvania, northern New Jersey, southeastern New York state, central and northern Connecticut, and interior Rhode Island.