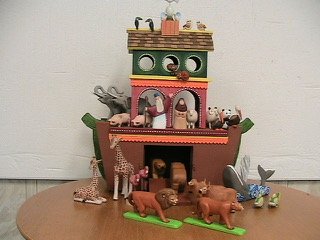 Admission to the show is free, and open to the public, and offers featured demonstrations, contests, raffles, and good food (available for purchase throughout the day). Besides the many raffles, this year’s ‘main event’ is “Noah’s Ark,” complete with hand-carved animals by club members.

The Woodcarvers started when a group of interested woodcarvers met in 1988 in the home of Roger Westgate, who was already a nationally known woodcarver.  Since that time, the group has grown, and consists of carvers with a wide range of experience from novice to intermediate, professional and world class levels, as they have competed at the state, national and world championship competitions.

“Woodcarving has been around for centuries,” Roger Westgate, organizer of the group said.

He added, “It’s a skill that has been handed down from father to son over the years. Later, specialized schools taught the craft, and by 1835 there were reported to be some 2,000 families in Bavaria, Germany who were woodcarvers. In Oberammergau, Germany, there are still over 2,000 wood carvers and sculptors, and a leading woodcarving school. But back here in America, the craft was almost a lost art. In the 1970s, there was resurgence, and now, there are thousands of woodcarving clubs all across the United States. The Catatonk Valley Woodcarvers Club, being one of them.”

Randy Conner, national woodcarver and award winning member of the Club has been instrumental in coordinating the annual show the last few years, helping to make it a success – a show not to miss.

The Catatonk Valley Woodcarvers Club meets regularly, and offers a variety of ‘hands-on’ instructional projects that is presented at these meetings for everyone to work on regardless of skill level – novice, intermediate, or professional.  Depending on the object being carved – a fox, frog, walking canes, duck, etc., these classes can take anywhere from three to eight weeks to complete such projects.

As part of the club, members enter their carvings in competitions.

“In order to compete in today’s competitions, carving has progressed, especially in carving birds,” Westgate said, adding, “The technology has evolved where the use of rotary tools have become necessary.”

These tools, some of which are actual dental tools, give finer details needed to complete birds.

Incised or chip carvings can be used for picture frames, borders, jewelry, chests and signs, and are usually carved geometric cuts. Relief carving, carving in the round (birds, caricatures, animals), and chain saw carvings all bring out surprising results. Wet pine, when let to sit in water for a period of time, cuts like butter while still wet.  And for canes, the roots of small tree shoots sometimes form the handle, and tend to take the form of animals.

The Catatonk Valley Woodcarvers Club meets in Candor every Monday night at the Candor Free Library. Other carvers come from Broome and Tioga County and even from Pennsylvania each week just to get their ‘fix’, and share their love of the craft.

Be the first to comment on "Catatonk Valley Woodcarvers Show"