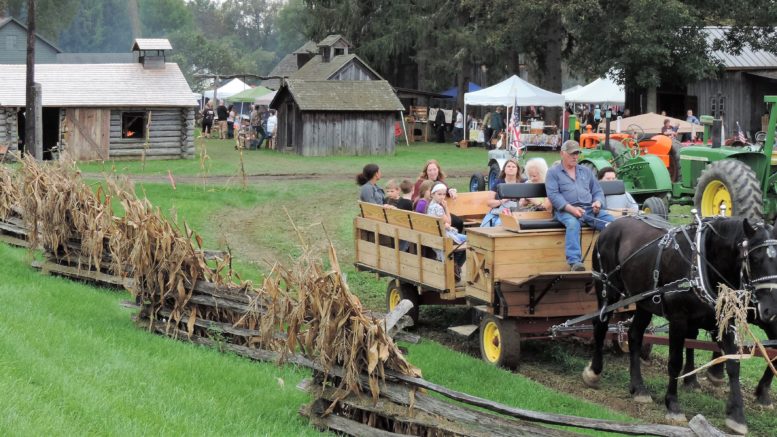 Guests enjoy a horse-drawn wagon ride during last year’s Apple Festival in Newark Valley. This year’s event is planned for Oct. 5 and 6, and will take place at the Bement-Billings Farmstead Museum in Newark Valley. (File Photo / JoAnn R. Walter)

The 39th annual Apple Festival will take place Oct. 5 and 6 at the Bement-Billings Farmstead Museum in Newark Valley, N.Y., and will offer guests a step back in time, along with a variety of food, entertainment, and much more throughout the two day event.

“What sort of day was it? A day like all days, filled with those events that alter and illuminate our times – all things are as they were then, and you were there.”

Those of you who fall into the early Baby Boomer category might remember these words spoken by Walter Cronkite at the end of a series of programs that ran from 1953 to 1957. The original program first appeared on radio from 1947 to 1950 as “CBS is There.” The program featured key events in both national and world history and covered the gamut from the Battle of Hastings and the execution of Joan of Arc, to interviews with James Corbett, the boxer who fought John L. Sullivan in 1892.

If anyone needs grist for the historic mill, most any day during the Civil War and in the years leading up to it will provide multiple topics for study and discussion. However, certain periods of time during that span were especially intense and nerve wracking for those trying to determine the course of the political winds. One such period was August of 1864.

Lincoln had plenty of detractors, even within his own party and the strength of these voices often ebbed and flowed with the fortunes of the Union cause. Although Grant’s successes early in the war enabled him to assume the leadership of the Union army, the campaigns of May and June of 1864 (Spotsylvania, The Wilderness and Cold Harbor) were extremely disappointing. Although General Sherman was on his way to Atlanta and Admiral Farragut had hopes for capturing Mobile, these campaigns were still in progress. The voices of the “Copperheads” (the anti-war Democrats) had become especially virulent.

But even within Lincoln’s own party a group was ready to set themselves apart and nominate General Fremont as their candidate. Although Lincoln’s campaign slogan was “Don’t switch horses in mid-stream,” this is exactly what he did for the vice-presidency, switching Hannibal Hamlin for Andrew Johnson. Although the anti-war Democrats were hoping to gain the White House with General McClellan, McClellan’s own views on the war were not much different than Lincoln’s.

The issues relating to Reconstruction were already coming into play with a number of Confederate states now under Union control. Exactly how should former Confederates be treated? Should they be offered an olive branch and should it be a hickory stick? And what of the former slaves? How could these people who had been denied their basic civil and human rights for generations suddenly be expected to become law-abiding citizens and have a stake in their communities? How could they be expected to vote intelligently when most had no basic literacy skills? And the question of slavery had still not been resolved.

The 13th amendment, which would end this injustice once and for all, had not passed in the House back in June. The Emancipation Proclamation issued on Jan. 1, 1863 had freed the slaves in Alabama, Mississippi and the Carolina’s, but not in Missouri, Kentucky or Maryland. Pay equity for Black troops was yet another issue. Although this group was becoming a larger and larger portion of the Union army, pay was still about half that of their white counterparts.

One offering of Newark Valley’s Apple Festival is the portrayal of historic characters. These may range from actual people (Johnny Appleseed for instance) or generic characters such as an itinerant trapper or trader.

This year four of these people will be discussing the tumultuous times of August 1864, several of whom have local connections. These include Hammon Pinney (a prominent Owego abolitionist, suspected of aiding slaves through the Underground Railroad), Catherine Beecher (an educator, writer and abolitionist now residing in Owego and yes, sister of Harriet Beecher Stowe), and Mrs. William E. Taylor (wife a prominent Binghamton banker and supporter of the Sanitary Commission). Joining them will be William Lloyd Garrison (a leading abolitionist and founder of The Liberator).

Although the cause of abolition is a driving force in all of these individuals, the path to abolition has often been very uncertain and divisive and the various social reform movements that have seen their inception in the second quarter of the 19th century have seen many friendships fray and even come apart. These four hope to engage the visitors to the Apple Festival in legitimate discussions of “current events”.

Joining them will be two other historic characters: Johnny Appleseed (how can you have an apple festival without him) and Apple Annie (a quaint but eccentric country woman whose love of apples and engaging ways bring a smile to everyone’s face).

The Newark Valley Apple Festival will take place on Saturday, Oct. 5 and Sunday, Oct. 6, from 10 a.m. to 5 p.m. both days at the Bement-Billings Farmstead, located one mile north of the Village of Newark Valley.

There will be plenty of activities throughout the two-day event, and plenty of apples. There will be heritage and guild demonstrations, a tour of the homestead, horse-drawn wagon rides, children’s activities, vendors and artisans, historical interpreters, along with plenty of food choices, and, of course, fresh apples, apple cider and apple desserts.

Admission is $6 for adults, $5 for seniors 60 and older, $4 for students six and older, and $4 for Newark Valley Historical Society members. The cost for a family is $20 (two adults and three or more kids). There is free parking.