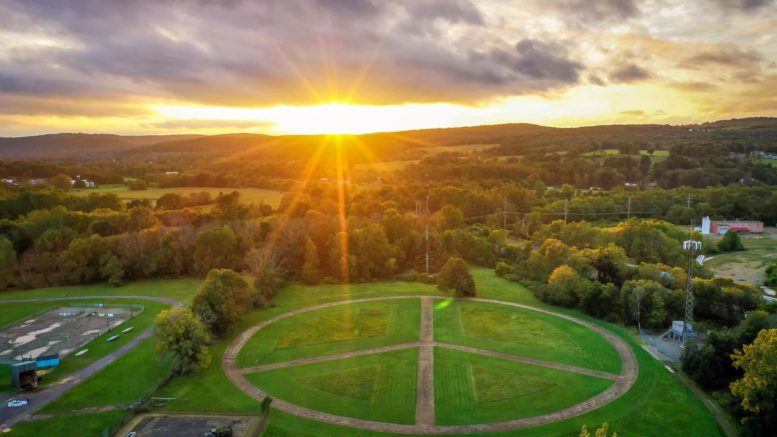 Pictured, is the peace sign located next to Owego Schoolhouse Antiques, located at 100 Elm St. in Owego. A formation will take place on the peace sign at 2 p.m., and during Owego’s 1st International Day of Peace Festival on Sept. 21. Photo by Drones over Broome.

On Sept. 21, months of mowing and organizing will come together during Owego’s 1st annual International Day of Peace Festival and “Stand for Peace” event at 100 Elm St. in Owego, N.Y., and at Owego Schoolhouse Antiques. The event will take place from 11 a.m. to 7 p.m.

This grassroots effort is free and open to the public, and will feature live entertainment, food vendors, and over 85 antique vendors. The festival has also been sanctioned by the United Nations as an official event.

An invitation is also extended for guests to “Stand for Peace” and form a human peace sign in the field next to the old schoolhouse. The formation will take place at 2 p.m., and will be photographed from the sky.

There will be entertainment outside by the peace sign as well as inside, where guests will also be able to browse through the antiques. The indoor music will take place in the building’s auditorium, which won an award in 1958 for having the best acoustics in America. This is also the same auditorium that Robert Kennedy spoke at while serving as a Senator and during a visit to Owego.

Bands such as Glenmary’s Ghost, Uncle Uku and the Guise, Voodoo Highway, and several more will entertain guests. There will be music throughout the event.

Last week, Jeremiah Harvey, from Glenmary’s Ghost, a jam band out of Owego, talked about their participation in the event and what it means to them.

“I love what it stands for,” said Harvey of the peace effort. “It represents peace, love, and unity in a troubled world.”

The members of Glenmary’s Ghost started playing together in 2015, and then officially formed as a band in 2018. The band performs a variety of Grateful Dead and Phish covers, and plans to bring their energy to the festival on Sept. 21. Glenmary’s Ghost will perform for guests from 5:30 to 7 p.m.

According to Harvey, they arrived at the band name because they practice on Glenmary Drive in Owego, and they also pay homage to the legend of the ghost at Devil’s Elbow – thus arriving at Glenmary’s Ghost for a band name.

“We played as friends in 2015, and in 2018 we started to take things seriously,” Harvey added, stating that they plan to bring a lot of peaceful energy to the event.

Also performing is Voodoo Highway, a band comprised of members Dana Stewart on vocals and rhythm guitar, Bob Rynone on lead and slide guitar and vocals, Tom D’Angelo on drums, and Irem Ayan on bass.

When Voodoo Highway heard about the peace sign and festival, they were all in!

“In a world that is increasingly fractured, celebrating peace seems like a wonderful and important thing to do,” said Stewart of the event.

For the festival, the band will be bringing the joy and energy to the stage that their fans have come to enjoy over the years.

“We are truly honored to be included in this great event and we can’t wait,” Stewart added. The band’s performance will take place by the peace sign from 11:30 to 1 p.m.

Other performances include Kevin Doupe, A Band of Brothers, Uncle Uku and the Guise, J Floyd, A Part of Pluto, and then Glenmary’s Ghost. Smoketown, a Celtic duo, will be performing as well between sets.

The owner of Owego Schoolhouse Antiques, Leonard Hilldale, began mowing the peace sign over the summer, and has over 500 hours on his tractor. Hilldale came up with the idea for the event in an effort to spread a message of peace.

“We just want people to come and join us in standing for peace,” said Hilldale, who is host to the event. He is also reaching out to area houses of worship to ring their bell at 2 p.m. and join in this effort.

You can learn more about the event, and more about Owego Schoolhouse Antiques by following them on Facebook, or by calling (607) 687-2709.

Be the first to comment on "Owego to host 1st annual International Day of Peace Festival; Stand for Peace effort on September 21"