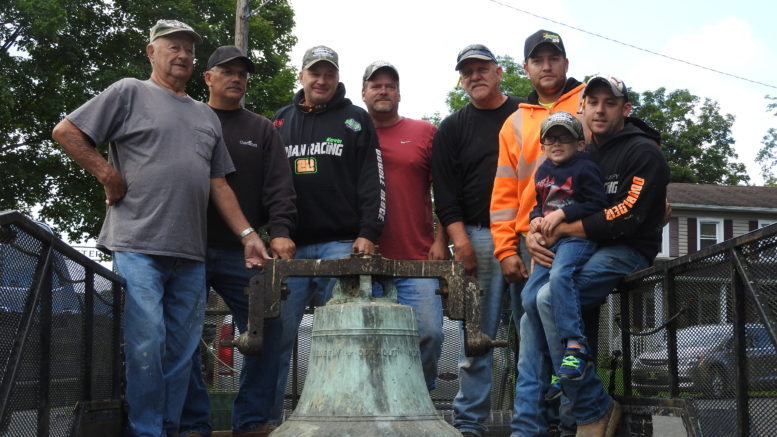 Somewhere around Jenksville, and northeast of Willseyville is the small community of Speedsville, N.Y. In the 1800’s, the area was booming with family-type farms and a variety of businesses. Inside the town’s center was a Unitarian Church, that in 1922 was transformed into a community hall.

Today, the community hall remains and work continues to make improvements. But as of Saturday, Sept. 7, there is one thing missing – the bell that was once prominently displayed in the church’s bell tower.

And although the bell is gone, it is far from forgotten; residents gathered last Saturday to extract it from the community hall, and lower it for placement in the village square. According to Roger Jordan, president of the community hall’s association, the bell will soon be on display, and will serve to keepsake a bit of history.

A large crane arrived last Saturday to lift the bell out of the building as a small crowd gathered to witness this historic occasion. The 800-pound bell, built in Troy, N.Y., was a weeklong, community-wide effort to extract.

A total of six community members, according to those on-hand at last Saturday’s bell raising, worked on the entire project.

As for the church, in 1919 the Universalist Church members dwindled and offered the church to the Speedsville community. Shortly after, and in 1922, the residents of Speedsville gathered and voted to remodel the old church into a “community house.” And according to history, in 1942 the steeple was declared unsafe and was removed.

The church’s bell remained, and was on the highest level of the building and underneath the metal roofing. Therefore, the task of removing the bell was not an easy one, but was made possible by 100 percent volunteer efforts and donations.

According to Roger, the crew had to reinforce the roof, cut the roof off, and then remove the bell from between the beams. Kevin Jordan noted that they had to remove a rafter to get the bell out.

Joshua Jordan agreed that reinforcement of the roof and structure was the most important aspect of the project, and that they were working on it since Tuesday of that week. “We re-did the whole building and wanted to bring it out,” explained Joshua.

As the crane lowered the bell from the roof last Saturday, guests were gathering around it, looking for the names inscribed inside the bell; most of the last names were Jordan.

Also observed at last Saturday’s gathering was the closeness of the community, and the number of family members and descendants who have called Speedsville their home for many years.

Historically, and in excerpts from a chronicle of the early days of Speedsville, it was described as bustling in the 1800s, with a hotel, two general stores, a feed store, cobbler shops, a newspaper and more.

From all reports, Speedsville was also known sometimes as a drinking town. The reports further explained that many people, from early 1800s to the 1930s were operating stills, some for their own use, and others for sale. Whiskey was also used for bartering goods and services.

Upon the invention of the automobile, however, many were afforded opportunities to seek work and entertainment in outlying areas, like Ithaca and Owego. Today, and according to Roger Jordan, the population numbers a couple of hundred.

The camaraderie shown last Saturday, however, breathed life into the small town’s history; standing still in the test of time for those that gathered, and as a testament to the town’s perseverance.

Attending the bell raising was Rick Morgan, a Speedsville resident and local firefighter. Morgan noted that the fire department came down to lend a hand as well, providing lights so the workers could remain safe while working on extracting the bell.

Upon entering the community hall, two long and narrow steps lead up to where the bell sat for many years. In the main hall, a bright kitchen accents the wooden floors and interior of the structure.

Roger stood in the kitchen, putting things away and talking about his small town, and the close-knit community. They are hoping to raise funds to continue work on the hall, making it a comfortable gathering place for the community to enjoy.

“We love this community,” said Roger, adding, “The bell was out of sight in the tower, now everyone can see it and learn about the history.”

“We all do this because we love it here,” Roger concluded.

A fundraiser is planned for Sept. 25, from 5 to 7 p.m. The spaghetti supper will be served at the community hall until gone, and will benefit continued renovations.

You can locate the community hall by taking Route 38 to West Creek Road, from Owego, and then following this road into the center of Speedsville. You can’t miss it!