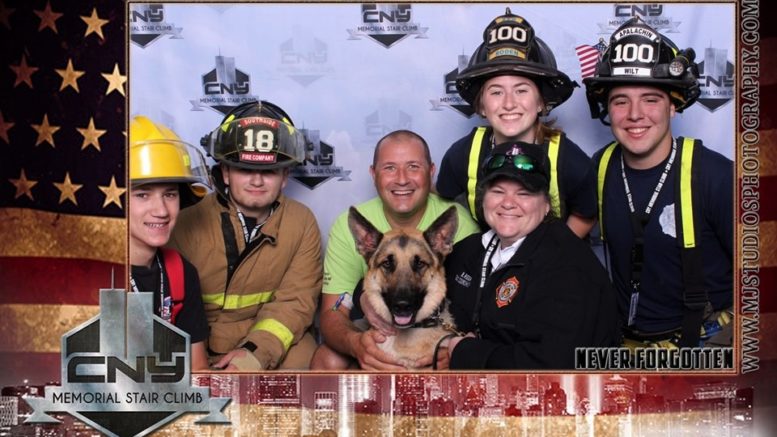 A family from Apalachin, the Roden’s, returned to Utica for the challenge.

Rebecca Roden, Tioga County EMS coordinator and volunteer firefighter for Southside Fire Company, completed the stair climb for a second year, along with her service dog, Ruger. Trained to help with PTSD and anxiety, Ruger accompanies Rebecca, a U.S. Navy veteran, in her daily activities.

Community service is a family tradition for the Roden’s. Both Rebecca and Michael grew up in fire service. Rebecca’s father, Ken Easton, is a life member of the Owego Fire Department and former fire chief, and Michael’s father, Will Roden, is a long-time member of the AFD.

The CNY Memorial Stair Climb, one of many held across the country in remembrance of fallen firefighters, honors all who died while saving others during the terrorist attacks on September 11, 2001.

The Utica climb began at 8:46 a.m. and encompassed 55 flights up and 55 flights down.  Each participant, donned in full bunker gear and SCBA, paid tribute to a FDNY firefighter by climbing the equivalent of the World Trade Center’s 110 stories.

Participants wore names and photographs of the 343 firefighters who lost their lives on September 11, and once finished with the climb, the photos were pinned to a memorial wall.

The occasion also honored thousands more who are fighting for their health today, and remembered those who have passed away from associated illnesses since 2001.

The tribute climb, an emotional and physically demanding experience, remembers the sacrifice and symbolizes the heroism of the FDNY.

Rebecca explained that the Oriskany Fire Department climbs together as a whole department, and said, “They welcome us like family every year.”  CNY Stair Climb event director and Oriskany fire chief, Jeff Burkhart, was Michael Roden’s college roommate.

Rebecca also remarked, “Fire and emergency services, no matter where they are from, are like family to us,” and added, “September 11, 2001 was a significant event that the fire service is never going to forget.  It should always stay at the forefront for everyone.”