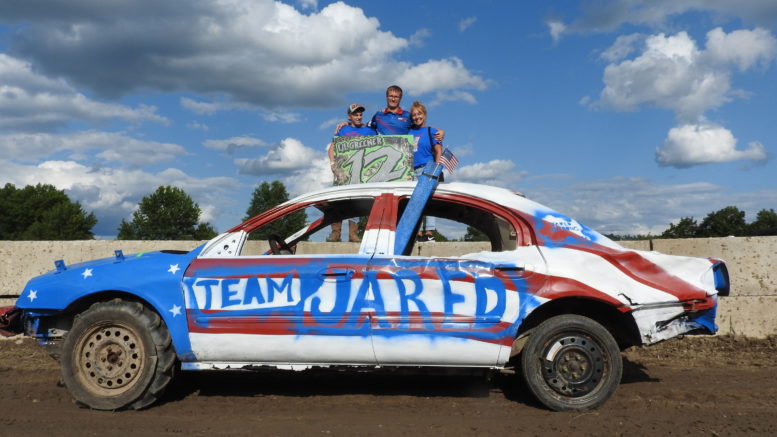 Pictured in the arena, from left, are Trevor Shedden, Jared Lamb, and Jared's mom, Julie Lamb. Jared was recognized prior to the start of the derby on Friday, and nearby the "Team Jared" car, designed by Trevor. (Photo by Wendy Post)

Last night’s demo derby was packed full of action, and welcomed a special guest to the track before the first heat. Jared Lamb, Special Olympian and Tioga Central student that traveled to Abu Dhabi to compete internationally, made his was to the fair to support his friend, Trevor Shedden, who designed his 6-cylinder 2000 Mercury Sable with a patriotic theme – and did so in honor of Jared.

On the hood of Shedden’s demo car, painted lettering read, “First Seattle and then Abu Dhabi – what’s next?” The rear of the car had an American flag hanging off of a post that was integrated in to the demo car.

Shedden, along with other classmates, friends, and fans of Jared Lamb, all greeted him when he arrived on Friday night in the derby pits, and with his mom, Julie. Some of them were wearing Team Jared shirts as they surrounded the car.

The Power Wheels, for the younger drivers, took place on the track for about a half an hour, and then an introduction of Team Jared and the car took to the track.

Lamb, in the passengers seat and next to his friend Trevor, came into the arena and the announcer introduced Jared, giving a brief history of his Special Olympic journey. The fans in the grandstand roared, many standing to honor this hometown hero. Lamb’s determination during the International Special Olympics in the spring was a shining example to all of the drivers that worked tirelessly throughout the year on their derby cars.

For Trevor Shedden, he stated that he started working on the “Team Jared” car about six months ago. Shedden was also running a second car on Friday, a 4-cylinder Hyundai Elantra.

When asked why he designed the car to honor Jared, Trevor stated, “To let him know he has support. We’re all very proud of him; having someone like him – it’s pretty cool.” The two grew up together in Tioga, and have been friends ever since.

Jared’s mom, Julie Lamb, accompanied Jared to the derby on Friday to support him as well. According to Julie, it was Jared’s first time at a demolition derby.

While there, Julie was overcome by the amount of support and love that Jared was receiving. “It’s heartwarming to see how accepting the community is,” said Julie, adding, “He’s been all over doing things; these are his classmates.”

As for Trevor, he won his heat in last year’s derby, and was hoping to do even better last night.

The fair continues today with rides opening at noon, a lumberjack competition at 10 a.m. and tractor pulls beginning at 10:30 a.m.

There will also be music by Hot Dogs & Gin, a popular regional band with 11-year-old phenom, Eamonn. Eamonn just finished a National Broadway Tour in various cities including Cleveland, West Palm Beach and Seattle, for the School of Rock musical!

The band will play for guests from 4 to 7 p.m. at the Agricultural Stage on the fairgrounds.

Today’s gate fee is once again $10, and offers entry, unlimited rides, and the grandstand shows.

Be the first to comment on "Fair has record turnout on Friday; welcomes Special Olympian Jared Lamb"