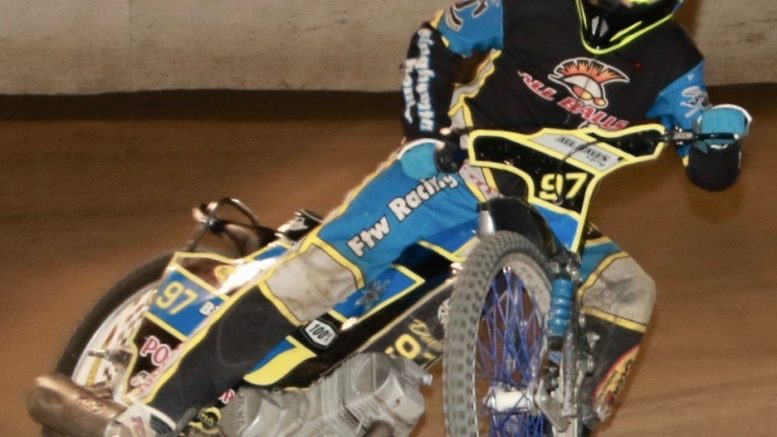 Round Two of the USSGP Series was moved from Action Park East in Greene, N.Y. to Champion Speedway on late notice to allow the staff some more time to work the surface at APE into good shape for speedway racing, as the track recently re-opened after an eight year layoff.

The surface at Champion Speedway has been excellent the past two weeks and provided some top-notch racing. The USSSGP events have been popular, providing a fair system for riders to qualify for this season’s U.S. Open Championships on Labor Day weekend and also a few events with a larger payout.

To open the evening up, Jeremy Parsons defeated Donholt. Despite Donholt’s efforts to try and pass, Parson’s kept his wheels in the traction and the gap did not close. McBride then began his quest with a win over Dave Oakden. Brian Hollenbeck, who also looked strong, was a first heat winner as well over Jonny Oakden.

McBride would go on to three more victories on his Justice Bros. / Arai / Oury / Scotts Headers / Cobra / TANKS Auto Sales powered GM to take the top spot after the heats. Donholt and Parsons followed with 11 points each, and then Hollenbeck with 10.

Semifinal number 1 featured Donholt, Parsons, J. Oakden and Spencer Portararo. Donholt made the gate and Parsons tucked in for the last transfer position. A good battle was had with Portararo and Oakden, with Oakden ahead at the end.

Semi 2 was more of the same from McBride and Hollenbeck with McBride winning and Hollenbeck second ahead of Dave Oakden in third and Jerry Harman in fourth.

Donholt made no mistakes in the final as he made a perfect start and led wire to wire. McBride had first gate choice and took the outside but caught too much traction from the start and slid off going into the first turn, ending his evening. Parsons capped off a solid night with a strong second place and Hollenbeck took final podium position. The outcome provides an interesting scenario heading into the final Round in August as McBride and Donholt are now dead even in Overall Points.

The next event is on Aug. 15 at Action Park and on Aug. 16 at Champion Speedway.

The USSGP Round 2 results are as follows.