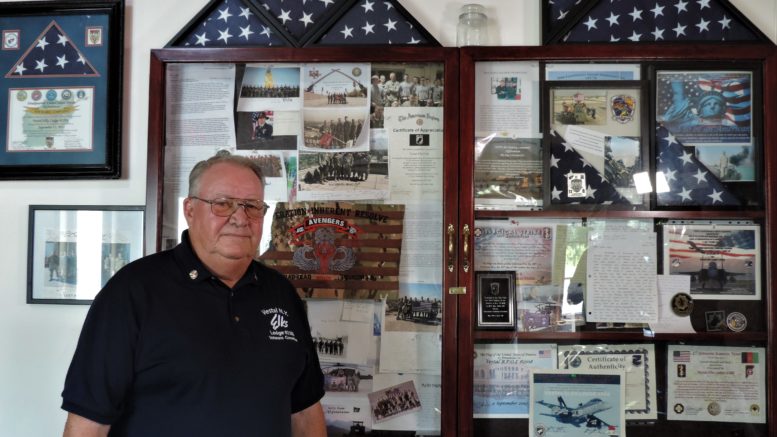 Vestal Elks Veterans Committee Member, Chuck Yoko, poses in front of the Lodge's "Veterans Wall," which showcases thank-you letters, certificates, flags and other items that service members stationed overseas have sent back to the Vestal Elks in appreciation for care packages the Committee ships out. (Photo by JoAnn R. Walter)

For 12 years, the Vestal Elks Veterans Committee within Lodge #2508, located at 2071 Vestal Parkway West in Vestal, N.Y., has been shipping care packages to soldiers stationed overseas.

Active military from Broome and Tioga Counties stationed in Afghanistan, Iraq, Kuwait, Korea, Germany, and the Middle East, among others, have been recipients of care packages, including what the committee cited are requested “Wish List” items.

At a June 25 gathering at the Lodge, Veterans Committee Members Chuck Yoko, Duane Horton, Chris Pullano, Fuzzy Fowler and Ernie Miscione, along with Exalted Ruler John Pooler and Chuck Moniz, PER Esquire, were on hand to share the program’s success to date.

Mindi Moniz, Public Relations officer, stated that the Lodge was a recent recipient of several generous donations from Upstate Shredding – Weitsman Recycling, Matco Electric, Delta Engineering, Tracey’s Road Equipment and Petcosky & Sons, and all of which will fund the program. The Committee is also grateful for all of the public donations they receive.

Adam Weitsman, owner and CEO of Upstate Shredding, commented via a press release that his contribution is, in part, “A simple way to make a tangible difference in the lives of men and women who selflessly serve their country every day,” adding, “I am honored to be able to help provide some comforts to those away from home fighting for our freedoms.”

Yoko remarked, “Of 870 total boxes sent, about 12 to 15 soldiers share each box,” and further explained that as many as 13,000 soldiers have benefited over the last 12 years.

The Veterans Committee cited that all items are donated, and every monetary donation goes back into the care package program. Approximately $33,000 has been paid for shipping costs alone, and each box shipped weighs an average of 25 to 30 pounds. Boxes are always double-wrapped and include a plastic bag inside for extra protection.

“These boxes are dropped out of helicopters to the ground or onto flight decks, and a lot of time into deserts,” Yoko said, and also mentioned that the durable wrapping efforts help keep sand out.

About the Veterans Committee efforts, Yoko said, “We all enjoy every second of it.”

Horton added, “We do it because it feels good for us in our hearts.”

When you first enter the main doors at the Vestal Elks Lodge, a “Veterans Wall” welcomes guests to take a few moments to admire contents neatly arranged inside a glass case filled with thank-you letters, certificates, flags and other items that service members stationed overseas have sent back to the Vestal Elks.

Yoko shed a tear when he talked about the wall, and said, “It is so heartwarming when they send these notes back,” and, as an example, pointed to one flag that had been flown in Afghanistan on Christmas Eve and Day in 2012, a gift that acknowledges appreciation for the Veterans Committee work.

In addition to the care package initiative, the Veterans Committee also organizes Christmas packages, which often include homemade cards from local elementary students, as well as host an annual Veterans Day dinner at the Lodge. The committee travels annually to the Oxford Veterans Home to host an ice cream social and extends gifts to veterans living there during the Christmas season.

On Aug. 24, the first annual Vestal Elks Car Show, featuring food, music, and a 50/50 raffle will be held from 10 a.m. to 2 p.m., rain or shine, at the Lodge. A $10 registration fee allows entry into the Open Classes show and several awards, including Top 5, Best Paint, Best Engine and Best of Show, will be presented. Proceeds will benefit the Vestal Elks Veterans Committee.